You are here: Home1 / Welcome To The No Sweat Shakespeare Blog!2 / Historic Shakespeare3 / William Shakespeare Gets Vaccinated!

It’s fitting that one of the first people in England to receive a vaccine for coronavirus was an Englishman from Warwickshire – one William Shakespeare. 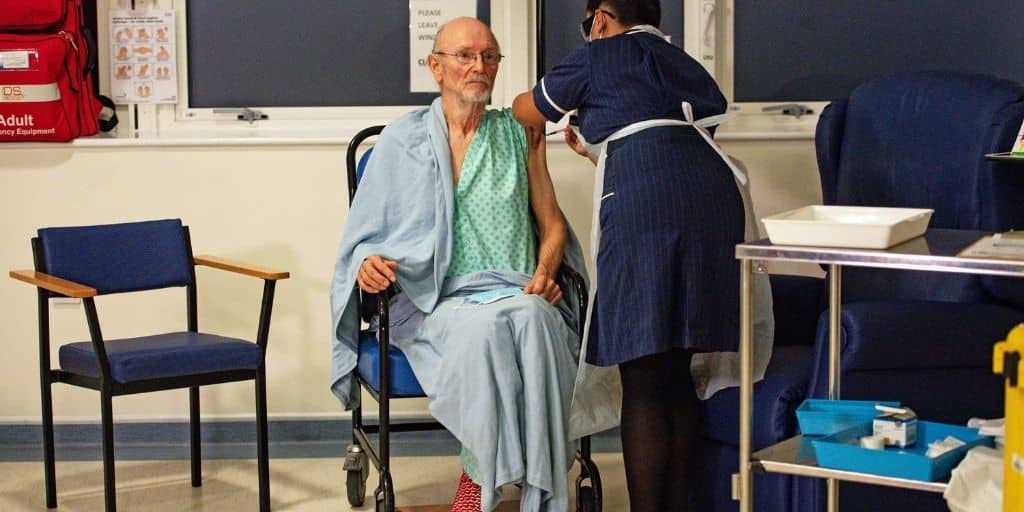 The beautiful irony of such an iconic English name almost makes up for the fact that our William Shakespeare never had a vaccination against the epidemics of bubonic plague that were such a feature of his life.

He was born just before the plague was about to break out and it swept through the country, killing a quarter of the population of Stratford-upon-Avon. The baby William was very much in the vulnerable category. There was no-one to tell his parents and their neighbours to wear face coverings, to keep a distance from others, and to wash their hands regularly. That the baby Will survived at a time before soap had even been invented, let alone the fact that hygiene was an unthought of concept, is a miracle.

We need a moment of silence here to reflect on what the world would be like, and what the English language would be like if the virus had killed that baby. Putting it like that is no exaggeration as when we think about who the people are who have had the most influence on what our world is like, Shakespeare is up there with Newton and Darwin.

Epidemic disease was one of the most dominant things in Shakespeare’s life. Just to think – 1592, 1603, 1606, 1609. Shakespeare managed to avoid infection when at least a third of the population perished with each outbreak. He headed for the isolation of his large home and the expansive open land around it, and sat it out, each time.

The authorities didn’t ignore the outbreaks and did their best. Just as we are experiencing today, they discouraged social gatherings. They closed inns and theatres, for example. They also had lockdowns.

Shakespeare did not specifically write about the plagues but they are woven into his plays, both in the action and the language. It was mainly a quarantine that dealt the death blow to Romeo and Juliet, where the messenger taking the vital message that Juliet is still alive to Romeo is forced into quarantine and, without the benefit of a cellphone, could not deliver the message.

In Twelfth Night, Olivia feels the burgeoning of love to be like the onset of plague symptoms, and gasps, “Even so quickly may one catch the plague.”

The plays, particularly Hamlet and King Lear are filled with images of disease and infection. In our time, when we have largely eliminated infectious diseases with vaccines, many of those images could pass over us, but Elizabethan audiences would have been acutely aware of each and every one of them. In using such imagery Shakespeare was commenting on a society – in the cases of Hamlet’s and Lear’s worlds – that was deeply and terminally corrupt, infected by human greed and ambition, killing all institutions.  At the same time, he was commenting on his own world, the corruption being a parallel of the insistent viruses that were infecting human bodies.

Like his famous namesake, William Shakespeare of Warwickshire has had a lucky escape.

The 9 Plot Elements of Shakespearean Tragedies