‘Bodkin’? What Exactly Is A Bodkin?

You are here: Home1 / Welcome To The No Sweat Shakespeare Blog!2 / Life & Times3 / ‘Bodkin’? What Exactly Is A Bodkin?

“Bodkin” is one of those lovely Middle English words that adorn Elizabethan plays but that we don’t use anymore.

We use the word “stiletto” for the Middle English word “bodkin” although “stiletto” was a word also used in the 16th and17th Centuries.

A bodkin is a pointed instrument for piercing holes in cloth for eyelets or embroidery –  a sharp slender tool, also ideal for killing someone if aimed at the right spot. It is also a hairpin, called a bodkin because it is long and slender and sharp-tipped.

A bodkin could also have an eye in it like a needle’s eye so that a tape or ribbon can be drawn through a loop or a hem. 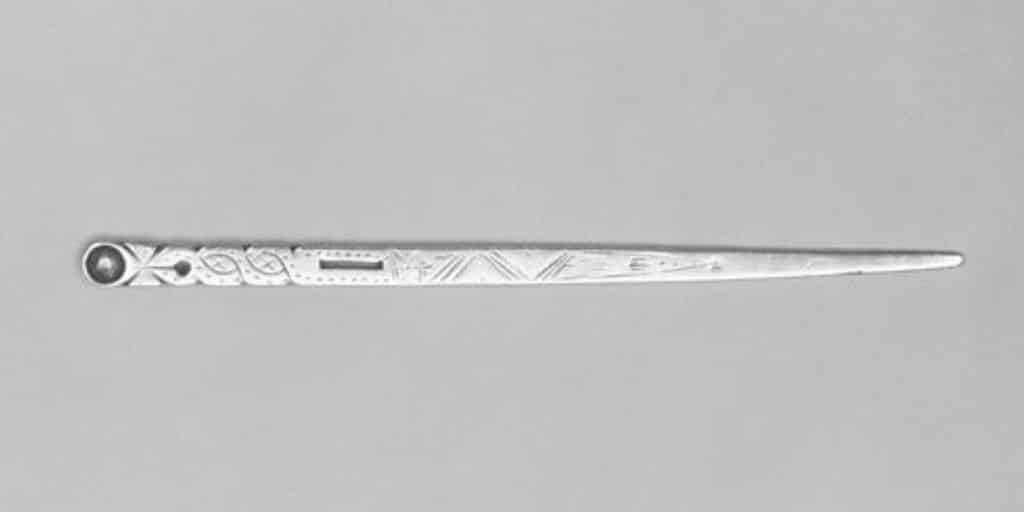 The name bodekin or badekin was first used in Old English in the 14th century. It’s likely that a bodkin-stilleto (dagger) could look so much like a bodkin-awl (or vice versa), that they would be called by the same name, especially as they might occasionally be used for the same purpose – to wound someone. Following on this, both the awl that poked the original hole, and the tool-with-hole that carried the thread through the hole would later take the same name.

Shakespeare uses “bodkin” in Hamlet, in the most famous soliloquy of all time, “To be or not to be.” Hamlet is thinking about death and his mind is ranging around the problems it would solve if he were just to end it all by stabbing himself with a simple household tool – a bodkin.

For who would bear the whips and scorns of time,
Th’ oppressor’s wrong, the proud man’s contumely,
The pangs of dispriz’d love, the law’s delay,
The insolence of office, and the spurns
That patient merit of th’ unworthy takes,
When he himself might his quietus make
With a bare bodkin?

It says something about the frailty of a human being’s life if all it would take to end it was a hairpin!

Shakespeare would have seen bodkins in his father’s workshop as he grew up. John Shakespeare used all the tools of the glover. They would have been laid out on a table – needles of all sizes, scissors, awls, bodkins, and many others, including a large metal implement for measuring gloves, known as “Charlemagne’s foot”. It was divided into 12 sections known as “inches.” It’s from Charlemagne’s foot that we get the measurement of feet and inches that is still with us today.

His father would have used needles and thread to produce the finished product. He would cut the raw materials to size prior to assembling them. Animal skin requires shaving, stretching and paring to ensure the maximum economy. Sheep shears were used to trim down the skin into precise sizes and then blanking plates or “webs” used to stamp deliberate shapes out of multiple pieces of leather in a press for the hands (trank), between the fingers (fourchettes) and the thumb, like sharp pastry cutters.

The young Will would have seen his father and his apprentices in the workshop, and he may, at some point, have considered working at his father’s lucrative trade. He certainly knew a great deal about leather and glove making and, as usual in his plays, the things he experienced as he grew up, found their way into his plays. Leather and, particularly gloves, were transformed into images in  his most beautiful poetry as, when Romeo, watching Juliet from an orchard sees her resting her cheek on her hand, gasps at the thought of touching her:

“See how she leans her cheek upon her hand! O that I were a glove upon that hand, That I might touch that cheek!”

Also in Romeo and Juliet Mercutio uses the image of cheveril – a kind of leather that is easily stretched, and perfect for making gloves:

“O here’s a wit of cheveril, that stretches from an inch narrow to an ell broad!”

Shakespeare shows a detailed knowledge of the craft of glove-making and the tools of the trade in his plays. In The Merry Wives of Windsor there is:

“Does he not wear a great round beard, like a glover’s paring-knife?”

The ‘Golden Age’ And William Shakespeare