‘Cozen’? What Exactly Is A Cozen?

The word “cozen” was a common Middle English word meaning cheat, trick, deceive, dupe. It was sometimes spelt “cozyn.” It possibly entered the English language from the French cocon, meaning a dealer, a merchant or a trader, which in turn could have come from the Latin cocionem –  a horse dealer.

Cozen was also commonly used in Early Modern English, the language in which Shakespeare and other Elizabethan playwrights wrote their texts, and developed as it began to become the Modern English that we use.

Although Early Modern English is close to the many forms of the Modern English that we use, there are some, mainly Middle English, words that have gone entirely out of use, and cozen is one of them. 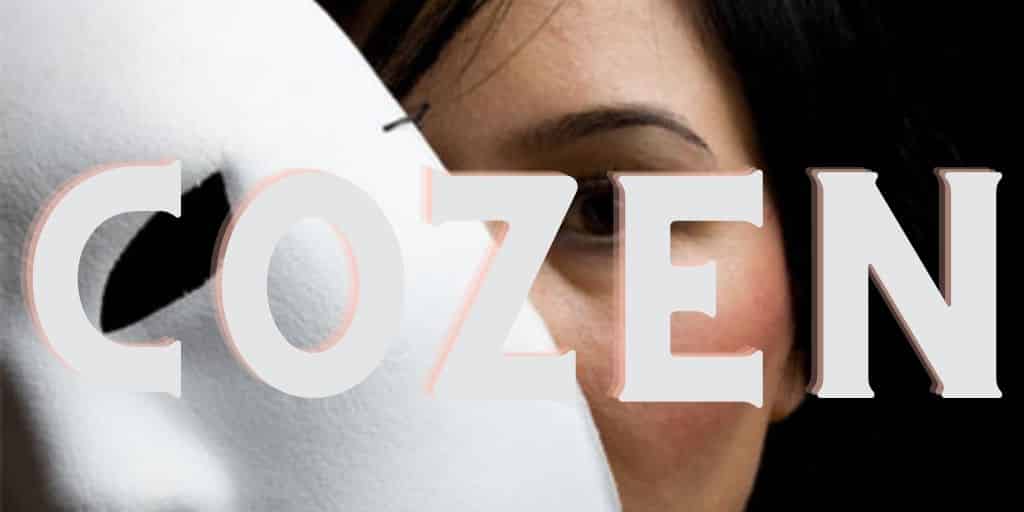 What is a cozen?

Shakespeare’s use of ‘cozen’

In this example from Othello, Act 4, Scene 2, Iago appears to be listening sympathetically to Desdemona as she describes the inexplicable behaviour of her husband, Othello. He has sworn at her and accused her of infidelity. This is ironic, and underlines his villainy, as he is the “cogging, cozening slave” who has devised that slander.

EMILIA: He call’d her whore: a beggar in his drink

Could not have laid such terms upon his callat.

IAGO: Why did he so?

DESDEMONA: I do not know; I am sure I am none such.

IAGO: Do not weep, do not weep. Alas the day!

EMILIA: Hath she forsook so many noble matches,

Her father and her country and her friends,

To be call’d whore? would it not make one weep?

DESDEMONA: It is my wretched fortune.

How comes this trick upon him?

EMILIA: I will be hang’d, if some eternal villain,

Some busy and insinuating rogue,

Some cogging, cozening slave, to get some office,

Have not devised this slander; I’ll be hang’d else.

IAGO: Fie, there is no such man; it is impossible.

Shakespeare is the one person who has had the most influence on the way English developed into the language we speak today. He invented or brought into popular use, thousands of phrases, and words, hundreds of which have become common idioms in Modern English. Apart from those idioms Shakespeare is responsible for some of the most memorable lines in English literature. However, many words and phrases that were common in his day have fallen out of use.

Other Early Modern English words we don’t use anymore

Some of the most commonly used defunct words in the plays of the Elizabethans, words that you will come across repeatedly in an Elizabethan play text, are:

Zounds: The most common swearword. Taking the Lord’s name in vain was a sin in contravention of the Ten Commandments and zounds was a kind of euphemism for “God’s wounds” – a contraction of the two words.

Fie: Commonly used in Elizabethan plays. It is an expression of disapproval or disgust. It can be used as a simple exclamation or directed at someone, as a curse: “Fie on you!”

Marry: Is one of the most common words in Elizabethan conversation. Originally a swearword, taking the Virgin Mary’s name in vain, it became a general word in conversation, used in the way we use “okay” in response to something another person has said or “you know what I mean,” as a verbal punctuation while relating something or “indeed,” when agreeing with someone.

Prithee: Is a polite word. As a corruption of the phrase “I pray you” it simply means “please.” So you may say, “Prithee, open the door.”

Anon: Means in a little while.

Other defunct words that appear less frequently in those texts are:

Mote: A tiny piece of something

Fardel: A burden, literally a bundle

“Cozen” is a lovely word. It’s a pity that it’s not used any longer. It’s strange how so many lovely words have disappeared from the language. But that’s how language works. When no-one uses a word anymore it becomes unusable after a while. You can still speak it but as language is how we communicate if no-one understands you there’s no point in using it.

The Romeo and Juliet Story

How Macbeth Addresses Power and Ambition
Scroll to top