What Exactly Is A ‘Flibbertigibbit’?

You are here: Home1 / Welcome To The No Sweat Shakespeare Blog!2 / Random Fun Stuff3 / What Exactly Is A ‘Flibbertigibbit’?

‘Flibbertigibbit’ is a word that has been kicked around like a soccer ball, going right back to its Mediaeval origins, having a slightly different meaning with almost every traceable incidence. It has been used by several writers over the centuries – including Shakespeare – and tends to mean a flighty or whimsical person, and usually refers to a young woman.

‘Flibbertigibbit’ has not survived into a commonly used modern English word, but it is still alive in the Yorkshire dialect, confined to a small geographical district, to refer to a gossip or someone who talks too much. 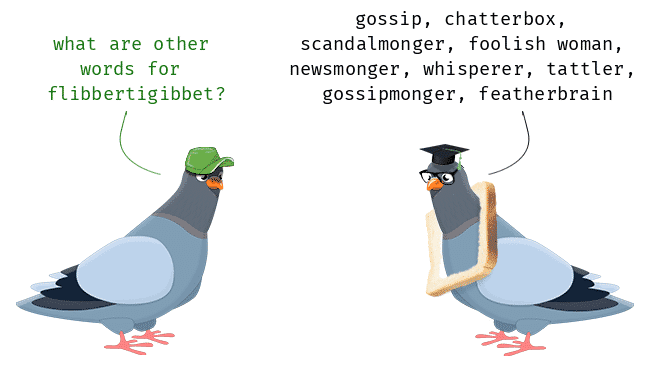 Shakespeare used the word Flibbertigibbit in King Lear as the name of a demon who possesses human beings and has to be exorcised. Since then there have been several appearances in the culture, every time with a different meaning.

It’s a pity that this lovely onomatopoeic word has shrunk to an almost disappearing point in its usage, as it’s a great word. Although it wasn’t invented by Shakespeare it joins some of his invented words that didn’t catch on, like the word ‘incarnadine’ that Macbeth uses when he regards his bloody hands with horror, and says that no amount of water could wash them clean and that in fact, even if he dipped them in the ocean the blood would not be washed off: instead, his hands would incarnadine it, ‘making the green one red’ (Macbeth, Act 2, Scene 2).

Shakespeare was a great reader and he had a sharp eye for things he could use in making his plays. He obviously read Samuel Harsnett’s 1603 book, Declaration of Egregious Popish Impostures. Harsnett was the Archbishop of York during Shakespeare’s time. He wrote several books about his main interest – demons and their exorcism. In Declaration he gives an account of forty fiends that Jesuits exorcised. Among them was one called Flibertigibbet. Shakespeare clearly liked the sound of that name. In King Lear (Act 4, Scene 1) Flibbertigibbet is one of the five fiends Edgar claims is possessing him, disguising itself as the beggar, Tom O’Bedlam.

‘Flibbertigibbit’ has also been used as one of the names for the mischievous fairy, Robin Goodfellow, who Shakespeare calls ‘Puck’ in A Midsummer Night’s Dream. Victor Hugo uses the name as a nickname for one of the characters, Amy Robsart, in his adaptation of Sir Walter Scott’s novel Kenilworth.

Other uses of the name still occur from time to time, including in Roald Dahl’s first children’s novel, The Gremlins, and in the film, The Sound of Music, where the nuns describe Maria as a Flibbertigibbit. Here again, not a clear meaning.

It seems that every time the word is used it means something different, which makes it virtually meaningless, used only because writers like the sound of it. As words have to mean something, that is perhaps the reason for its virtual disappearance from common usage today.

The Case For Shakespeare Fathering William D’Avenant
Scroll to top