You are here: Home1 / Welcome To The No Sweat Shakespeare Blog!2 / Historic Shakespeare3 / William Shakespeare & Robert Johnson – The Musical Collabor... 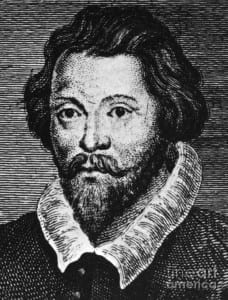 I’m grateful to Ed Kliman, one of our readers, for drawing my attention to the composer, Robert Johnson, the son of John Johnson, lutenist to Elizabeth I , who had a long working relationship with Shakespeare. The two men worked together on several of the plays, like a Renaissance Rogers and Hammerstein.

We tend to concentrate on the drama, characters and language in Shakespeare’s work and lose sight of something as fundamental to Renaissance entertainment as music, which features strongly in his plays. For all Shakespeare’s genius in drama, poetry and business, he was probably not as skilled as many others in acting, although we do know that he was, in fact, an actor. There is no indication whatsoever, though, that he had any skill in music. But he wrote parts for great actors, both tragic and comic, and he used music as an expression of his themes and the action of his plays. It was for others to write the music.

When we think of the great roles like Hamlet, Lear, Othello, we know that Shakespeare was taking advantage of the presence in his company of some particularly skilled actors whom he knew could handle such roles. In the same way he had at his disposal a very interesting, prolific and talented composer for much of his writing career, with whom he became close friends, increasingly so towards the end of his career. And so we have the constant use of the musician, Robert Johnson, who supplied incidental music and settings of the songs for his plays, until the climax of Shakespeare’s career arrived with The Tempest, a masque play, which in modern terms would be regarded as a musical drama, or what we simply call a musical.

The Tempest is a huge and major drama that draws the threads of Shakespeare’s ideas and preoccupations together in a beautiful resolution. It’s a delightful play in which action and ideas are expressed in a balance of poetry and music. At the time he was writing the play his composer friend and collaborator was deeply interested and active in the new, fashionable form – the masque. The friendship was clearly very influential in the creation of The Tempest which is the most famous of all the masques produced in that era.

There have been so many English composers who have disappeared into obscurity. That would have happened to Robert Johnson, in spite of his having been employed by James I’s son, Prince Henry, and later by Charles I, as a lutenist, and having composed a great deal of music, most of which is lost. He has been immortalized  though, by the happy accident of his having met Shakespeare and having composed the original settings of several of the songs in Shakespeare’s plays. Other composers of the time – such as Thomas Morley – set Shakespearean lyrics to music, but Johnson is the only one who has been proved to have been connected to the original performances of the plays. And here’s Robert Johnson’s setting of Shakespeare’s song ‘Where the bee sucks there suck I’ from The Tempest.

So many books and papers about Shakespeare begin with the declaration that we don’t know much about the dramatist, but information like the association of these two artists crops up from time to time and is explored by scholars and historians. Then we find that we actually do know quite a lot about him, although it’s oblique rather than direct knowledge.

Thee and Thou – What Does It All Mean?
Scroll to top