You are here: Home1 / Welcome To The No Sweat Shakespeare Blog!2 / Historic Shakespeare3 / Working Life in Shakespeare’s England 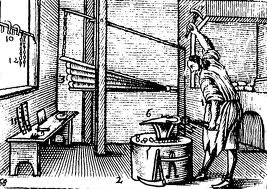 A blacksmith in Shakespeare’s day

When the young William Shakespeare went to London, almost a hundred miles away from his hometown of Stratford Upon Avon, to look for work, he was doing something unusual. Most young men stayed at home and usually went into the same area of work as their fathers. One might have expected young William to become a glove maker like his father or, as there would not have been enough work for all the Shakespeare brothers, to have found other work locally. Shakespeare knew what he wanted to do, though, and he had to go to London for that.

Migrating to the cities was something that would become common in England as the Industrial Revolution advanced, and it was only then that people’s work and home lives were separated, as the workers had to gather in the buildings where the machines were located. Until then, most people worked as families, at home, manufacturing goods by hand. Shakespeare’s father made his gloves in a workshop in the family’s home and displayed them on a windowsill overlooking the street. In our time we expect to get up in the morning and go to a dedicated workplace that looks and functions very differently from our domestic scene. With the development of the internet, though, there is a new tendency to work at home again as, with the new, efficient, highly-developed communication techniques, there is no need for the industrial era’s factory model – everyone in the same workspace – unless the work depends on equipment that’s not portable.

Apart from essential manufacturing, the jobs that needed doing were simple tasks that still need doing, so we still have jobs for painters, carpenters, shoemakers, barbers, cooks, blacksmiths, porters, farmhands, clerks and many others.  But some tasks, such as bottling, wheelmaking and weaponry have been taken over by machines. And some have disappeared. There is no need for scribes, although they do exist in some countries, or jesters, although they exist in other forms. Players and minstrels, although their name has changed to actors and musicians, will always be needed and valued, however, the world changes.

Since Shakespeare’s time, through the industrial era to the present, whole new areas of employment have arisen. The financial industry is enormous in our time. The Elizabethans had moneylenders, and there was also a primitive banking industry but that sector now drives the developed world. And the electronic age has created multiple job categories to make up for those that have disappeared.

How Did Shakespeare Get into Acting?
Scroll to top