You are here: Home1 / Shakespeare Characters2 / Ariel, The Tempest

Ariel is a character in Shakespeare’s play, The Tempest. The play has strong fantasy characteristics, with magic and spirits and various illusions. Ariel is not a human being: he is a spirit and a native of the magical island on which the drama is set. He is the servant of the
magician, Prospero, obliged to serve him since he was rescued by the magician from the tree in which he was imprisoned by the evil witch Sycorax, who had previously occupied the island.

Prospero will not tolerate disobedience from his spirit servant, but promises to give him his freedom as soon as he has completed a task for him. Ariel’s function is to act as an observer and report back to Prospero about the things that are going on, and to intervene when
required. He has special powers: he can fly, he can make himself invisible, control the movements of people, and influence the weather, and these are qualities Prospero needs for this task. 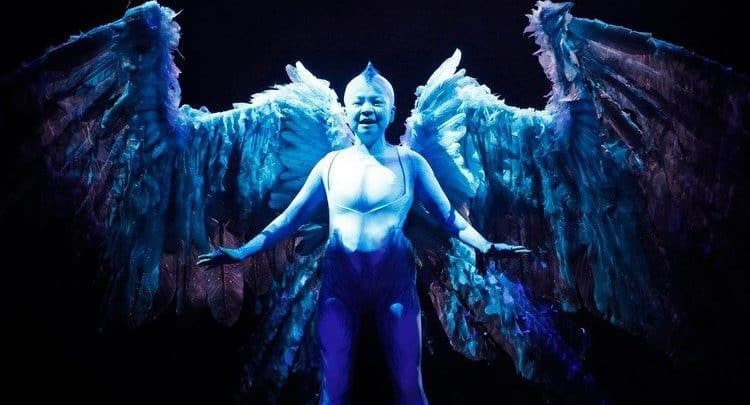 Spirits like Ariel were seen during the Elizabethan/Jacobean period as either the agents of the devil or of God. Scientists, or philosophers, saw them as elements of nature that could be brought under the control of the learned. Ariel in the Shakespeare play is more like the scientific model – a spirit controlled by a learned man. Shakespeare modifies that by making him like a human, with the same fears, passions, desires etc. So Ariel is a spirit in the tradition of spirits but he is also a dramatic character in a play. It’s a practical matter as there is no other way to present him in a drama than as one of the characters.

We first meet Ariel in the second scene of the play, where he reports back to Prospero, excited about his success in creating a violent storm that has wrecked the ship of the King of Naples. As instructed by Prospero, no-one was harmed in the wreck. The whole of the royal party has landed safely on the island. Ariel begs for his freedom but Prospero tells him he isn’t ready to release him. He promises that he will do so in two days time.

Ariel appears again in Act 2 to intervene in a conspiracy to kill Alonso, the King of Naples, by his brother, Sebastian. Ariel wakes the sleeping king, thus foiling the plot to kill him in his sleep. Again, in Act 3, he foils Caliban’s plot to murder Prospero. He then appears to the royal party in a clap of thunder and rebukes Prospero’s wrongdoers. Towards the end of the play he gathers the island’s spirits to attend the wedding of Ferdinand and Miranda.

As the play ends Ariel releases Prospero’s prisoners and restores the wrecked ship to its pre-storm condition, complete with its sleeping crew. Having carried out his instructions to perfection, he is praised by Prospero, who sets him free.

Although Ariel is a character in a play, and although he interacts with human characters, he is not like human beings, with their complex human characteristics, comprised of the good and the bad. He is notable for displaying only a good side. He is super-empathetic, made conspicuous by the lack of empathy among the human characters.

Ariel is Shakespeare’s most musical character. Not only does he have four full songs in the play, he also plays instruments and is able to summon up music at will. He is accompanied by music on his entrances and exits. Shakespeare uses his music, particularly the songs, to drive the plot, to act as dramatic devices, making the characters act in certain ways. For example, Ferdinand, bewildered and wondering where his father is, follows Ariel as he sings about where his father, the king, is. “Full fathom five they father lies/Of his bones are coral made,” etc. That is the way that Ariel directs Ferdinand’s movements.

Ariel in other contexts

Shakespeare’s characters are immortal in Western culture, not only appearing in countless performances of their plays, even after four centuries, but in innumerable spin-offs.

Ariel is one of the most popular characters employed in other contexts – ballets, operas, music, and so on. He has been represented in the paintings of artists for four hundred years. Several dance companies have staged versions of The Tempest, in which Ariel is a principal figure, and many more have used Ariel in their original ballets. There have been several operas featuring Ariel, and the spirit appears in countless poems. He even appears in video games: An example of that is the game Life is Strange. In the first episode, we see a rehearsal of The Tempest, featuring Ariel.

There are also several reinterpretations of The Tempest – for example, The League of Extraordinary Gentlemen, as part of the first incarnation of the gentlemen, Prospero’s Men. In this episode of the series Ariel is female.

The iconic American poet, Sylvia Plath, was fascinated with Ariel from her first encounter, in childhood, with the character. Her famous book of poetry is titled Ariel because she regarded the poem with the same title as the best poem in the book. She changed the name of the poem, to “The Horse” before publishing the book, but kept the title Ariel for the collection itself. On the surface, the poem seems to be about riding a wild horse but it is really about her creativity and the dangers in the path it was taking.

The Russian-born writer, Ariel Durant, joint winner with her husband, Will Durant, of the Pulitzer Prize for their The Story of Civilization, changed her name from Chaya to Ariel in honour of Shakespeare’s spirit.

In the second season of the 2015 television series, The Librarians, Ariel, a female here, is presented as an actual fairy. All through that season, she is a small blue sprite imprisoned in Prospero’s pocket watch. In one of the episodes, however, she disguises herself as a human and wears the watch on her necklace. She works to free the librarians from Prospero’s imagination and is herself subsequently freed when the watch is destroyed in the real world.

All hail, great master! Grave sir, hail! I come
To answer thy best pleasure, be ’t to fly,
To swim, to dive into the fire, to ride
On the curled cloud. To thy strong bidding, task
Ariel and all his quality. (Act 1, Scene 2)

Is there more toil? Since thou dost give me pains,
Let me remember thee what thou hast promised,
Which is not yet performed me. (Act 1, Scene 2)

Full fathom five thy father lies.
Of his bones are coral made;
Those are pearls that were his eyes;
Nothing of him that doth fade
But doth suffer a sea-change
Into something rich and strange. (Act 1, Scene 2)

You are three men of sin, whom destiny,
That hath to instrument this lower world
And what is in ’t, the never-surfeited sea
Hath caused to belch up you, and on this island
Where man doth not inhabit, you ‘mongst men
Being most unfit to live. I have made you mad. (Act 3, Scene 3)

Your charm so strongly works ’em
That, if you now beheld them, your affections
Would become tender. (Act 5, Scene 1)