Banquo is a character in Shakespeare’s Macbeth, and the ghost of Banquo is one of the most famous ghosts in English literature.

Banquo is Macbeth’s friend and fellow military commander. At the beginning of Macbeth we see them together, fighting and defeating the rebels against the king, Duncan.

Word of their victory reaches the camp where Duncan is waiting with his two sons, Malcolm and Donalbain. Macbeth and Banquo are his top officers and he is waiting to receive and honour them for their loyalty and their success in battle. 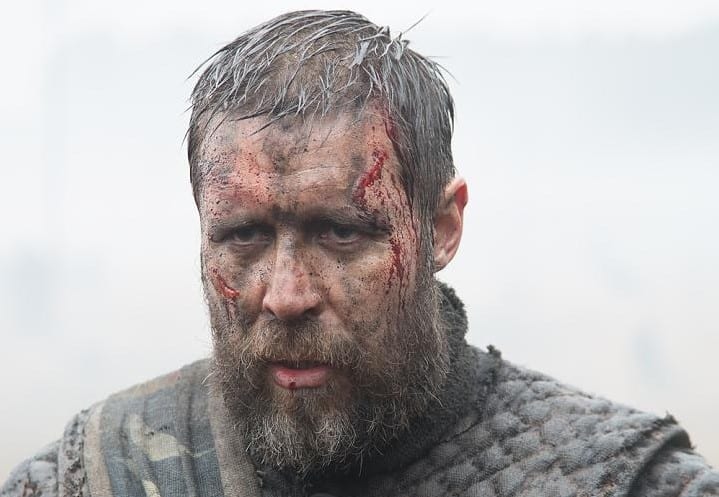 On their way to Duncan’s camp the two men are stopped by three witches who show that they know who the two are. They predict that Macbeth will soon become Thane of Cawdor and, subsequently, king. They ignore Banquo but he asks them what they have to say to him.

They turn to him and tell him that he will not be king but will be the father of a long line of kings. The two men laugh about it but the idea stays with Macbeth and he is struck with a thought that he can’t bear to allow – that to become king he would have to kill Duncan.

Macbeth dismisses the thought but it becomes difficult when he is met by two messengers from the king, telling him that the king has awarded him the lands and title of the recently executed traitor, the Thane of Cawdor.

Macbeth writes to his wife, Lady Macbeth, and tells her about the encounters. That puts the same idea into her mind, that the king will have to be killed, and she quickly decides that she will work on it.

The king greets his two captains and tells Macbeth that he will be coming to spend the night at his castle at Inverness before going hunting the next day. When a messenger arrives at the castle and tells Lady Macbeth that the king is coming she knows that she will have to persuade her husband to act.

Macbeth returns to his castle and Banquo and his son, Fleace – a child – go with him. Lady Macbeth puts great pressure on Macbeth to murder Duncan. At first, he resists but she prevails and he agrees to stab Duncan in his sleep.

After the murder Macbeth is proclaimed king. He and his old friend chat and Macbeth tells Banquo that he had better make sure that he attends the state banquet he and the queen are holding to honour their ascent to the throne. Banquo suspects Macbeth of having murdered the king but expresses his loyalty. He tells Macbeth that he has to go away on business and will do his best to get back in time. He also tells him that Fleance, will be accompanying him.

By this time Macbeth is already sleepless as a result of the guilt he is experiencing. He is already paranoid and is about to embark on a reign of terror, murdering his rivals and opponents. Banquo is to be the first of these.

Macbeth hires some murderers and tells them to attack Banquo on the way back and to make sure that he kills his only son, Fleance, as well.

During the banquet one of the murderers arrives and Macbeth is called out of the hall. The murderer tells him that he has killed Banquo but that Fleance has escaped. That throws Macbeth into a state of panic.

But he pulls himself together and returns to the table and begins to make a welcome speech. He says that he wishes that Banquo could be there. There is a figure sitting at a table in Banquo’s place and when he turns to look at the king Macbeth sees the blood-drenched face of Banquo.

He starts yelling and cowering away from the ghost. Lady Macbeth calms him down. He apologises and returns to his speech. When he mentions Banquo again the ghost appears once more and this time Macbeth goes mad. Lady Macbeth dismisses the guests, telling them to leave as fast as they can.

Macbeth becomes increasingly bloodthirsty and Shakespeare gives us the onstage spectacle of one of the murderers killing a young child – a son of Macduff, the man who eventually defeats and kills Macbeth.

We see Banquo once more. Macbeth returns to the witches to ask them to predict the future. Their predictions come in riddles but the last prediction is an image of Banquo wearing a crown and leading an endless parade of his descendants.

Banquo is hardly a character in Macbeth. He has a function rather than a dramatic role in the play. It is his function to be the first victim in Macbeth’s reign of terror and his ghost’s is to pile on to the guilt that is already beginning to unsettle Macbeth.

He has the further function of appearing as an image in the witches’ prediction of what is going to happen as a result of Macbeth’s regicide. It is a dumb show, demonstrating that one of his descendents is going to ascend the throne of Scotland and that the dynasty is going to endure for a very long period of time.

And so, Banquo is important for other reasons than functioning as a dramatic character: Shakespeare hasn’t realized him as a character. All we can say about him is that he is a loyal supporter of Macbeth.

Although he strongly suspects Macbeth of the crime he does not show any resistance in the way most of the other characters do. He also does not actively support Macbeth in the sense of helping him against his opponents. Moreover, he does not live long enough to play any part in the great drama that follows the murder of Duncan.

However, his dying words “oh slave!” are a condemnation of Macbeth as he realizes in his last moments that he has been betrayed by his friend. As he dies he calls instructions to his son, running away from the murderers, to avenge his murder.

That look not like th’ inhabitants o’ th’ Earth
And yet are on ‘t?—Live you? Or are you aught
That man may question?
You should be women,
And yet your beards forbid me to interpret
That you are so. (act 1, scene 3)

If you can look into the seeds of time,
And say which grain will grow and which will not,
Speak, then, to me, who neither beg nor fear
Your favours nor your hate.  (act 1, scene 3)

Were such things here as we do speak about?
Or have we eaten on the insane root
That takes the reason prisoner? (act 1, scene 3)

That, trusted home, Might yet enkindle you unto the crown, besides the thane of Cawdor. (act 1, scene 3)

Thou has it now: king, Cawdor, Glamis, all. As the weird women promised, and I fear. thou played’st most foully for ‘t.  (act 3, scene 1)