We tend to think that Hamlet, is all about the prince. But it’s a play with a full cast of characters all interacting intricately with each other. Claudius is without doubt the second character in Hamlet . The substance of all dramas is the playing out of human relationships, and the action of Hamlet is mainly concerned with the relationship between Hamlet and Claudius. On the story level the two play a cat and mouse game with each other. 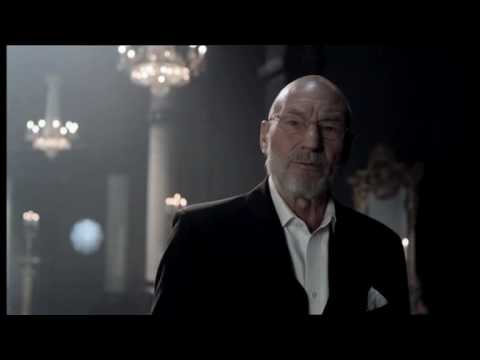 On the death of his father, the king of Denmark, the young prince returns from university to the Danish court at Elsinore Castle only to find that his father’s brother, Claudius has not only managed to make himself king, but has also married his brother’s widow, Hamlet’s mother, Gertrude. It is a giddy situation, everything happening very fast, and Hamlet is stunned into a surly sulk.

Claudius is a smooth-tongued, self-assured and convincing man – an experienced politician – and he slips easily into the role of king, where he takes command and presents himself as a charismatic national leader. The young man he has disinherited is an inexperienced student, a private, inward-looking man, not having the first idea of how to deal with the situation in which he finds himself.

What is particularly galling for Hamlet is that his mother has married this man who, compared with his late father, is a parody of a king. He’s also galled by Claudius’ pleasure-seeking habits – his eating and drinking and his excessive sexual appetite.

Both Claudius and Gertrude attempt to break through to Hamlet, imploring him to take off his black mourning suit and realise that everyone dies, that one just has to get back to normal and carry on with one’s life. But Hamlet is unable to do that.

Hamlet’s university friend, Horatio, has also come for the king’s funeral. He tells Hamlet that the guards on the castle battlements have seen the ghost of the dead king and that he should check it out for himself.

Hamlet goes to the battlements and his father’s ghost appears and tells him that he was murdered by his brother and that Hamlet should avenge his murder.

The rest of the action is about that. Hamlet finds himself paralysed by his inability to know what to do and is simply unable to do as the ghost has instructed him. For several reasons he just can’t bring himself to act. But that doesn’t stop Claudius from regarding him as a threat and he begins to plot against Hamlet’s life. He is a ruthless murderer sheltering behind the facade of a genial, likeable king. He employs some of Hamlet’s fellow students to spy on him. He and his most senior aide, Polonius, spy on him themselves as well, and as the threat grows, he finally sends Hamlet on a mission to England and gives instructions to the English king to execute him.

Hamlet manages to escape from that trap and, with the help of pirates, returns to Denmark. He gives up all thought of avenging his father’s death, deciding that he will just allow matters to take their course. A Christian theme creeps into the text here as Hamlet decides to let Heaven punish the wrongdoers.

Matters do take their own course and the wrongdoers do meet their ends in the final scene.

Claudius arranges a fencing match between Hamlet and Laertes, the son of Polonius, recently killed accidentally by Hamlet and he and Laertes plot to murder Hamlet in the match by poisoning the tip of Laertes’ sword.

The duel takes place in the final scene of the play. So many characters die in that scene that Shakespeare has to bring in extra characters to carry the bodies off the stage! During the course of the play all those who have plotted against Hamlet die in the execution of their plots. That’s where the term ‘hoisted by one’s own petard’ comes from – Hamlet’s description to Horatio of what he thinks is going to happen.

Claudius is one of the most rounded of Shakespeare’s villains. For example he is not as heartless as his behaviour suggests and we get an insight into his remorse for the bad things he has done. He is aware that all those things – murdering his brother, marrying his widow, and plotting against Hamlet – are terrible. At the same time as he is carrying out his villainous deeds he is suffering badly from the effects of his acts in the extent of the guilt that he feels..

At one point he tries to pray for forgiveness but, displaying a measure of self-knowledge, he gives up because he recognises that the benefits of what he has done are things he couldn’t bear to give up and so could not hope for forgiveness. He has gained the throne, and a beautiful queen. He gets up from his knees because he knows that his words are flying up to heaven but his thoughts are solidly grounded in the realm of human ambition.

Claudius is a terrible human being but Shakespeare presents him in such a way as to allow us to sympathise with him. he takes us inside Claudius’ head and what we see is a very talented man and a gifted politician who, overwhelmed by ambition, has committed one of the worst possible crimes – the murder of his own blood. However, he is his own greatest critic and hates what he has done. And then to top it all and make him even more human, he admits to himself that he is too weak to do what he knows would be the right thing.

‘Tis sweet and commendable in your nature,
Hamlet,
To give these mourning duties to your father.
But to persever
In obstinate condolement is a course
Of impious stubbornness. ‘Tis unmanly grief.
It shows a will most incorrect to heaven,
A heart unfortified, a mind impatient,
An understanding simple and unschooled: (act 1, scene 2)

This sweet and commendable in your nature, Hamlet,
To give these mourning duties to your father,
But you must know your father lost a father,
That father lost, lost his — and the survivor bound
In filial obligation for some term
To do obsequious sorrow. But to persever
In obstinate condolement is a course
Of impious stubborness, ’tis unmanly grief,
It shows a will most incorrect to heaven. (act 1, scene 2)

How smart a lash that speech doth give my
conscience.
The harlot’s cheek beautied with plast’ring art
Is not more ugly to the thing that helps it
Than is my deed to my most painted word.
O heavy burden! (act 3, scene 1)

O, my offence is rank, it smells to heaven;
It hath the primal eldest curse upon ‘t,
A brother’s murder. (act 3, scene 3)

poor Ophelia
Divided from herself and her fair judgment,
Without the which we are pictures or mere beasts; (act 4, scene 5)