Cordelia is the youngest of Lear’s three daughters in Shakespeare’s play, King Lear.

The play opens with Lear, the king of Britain, an old man now, gathering his family and his court around him to make a momentous announcement. He has decided to retire. He is going to divide his kingdom into three parts and award the sections of it to his three daughters, each one receiving her portion according to how much she loves him. He will hold on to the title of king and they will take on the responsibilities and enjoy the revenues.

The two older daughters, Goneril and Regan, try to outdo each other in their flattery and declarations of love for the old man. When he turns to his youngest and favourite, Cordelia, and asks her what she has to say, her reply is ‘Nothing.’ He is astonished and asks her to try again. She explains that she has a duty towards him as a daughter and she loves him according to that bond – the bond between daughter and parent, and the duty a child has towards her father. 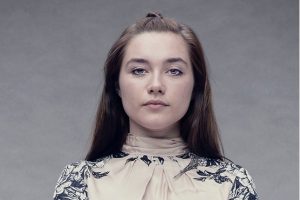 Cordelia as played by Florence Pugh

He flies into a rage and tells her that she will have nothing. There are two suiters come to woo her, both expecting a large dowry and a share of the kingdom. Lear tells them that they can have her as she is, but nothing more. The Duke of Burgundy declines the offer but the King of France accepts her as she is. And she goes off with him.

This is a fairytale plot, similar to the story of Beauty and the Beast.  On one level the meaning of the play is about the learning journey Lear takes to eventually understand how valuable and important the bond between father and child is. The two elder daughters treat him, first with disdain, and then with cruelty and at the end of the play, when he has been brought down to the level of a crazy beggar, Cordelia comes to his aid.

As a character, Cordelia is too good to be true. She appears at the beginning of the very long play and then again at the end. She doesn’t have the human attributes that we usually find in Shakespeare’s characters. She is a saintly figure who comes into the action after we have seen characters acting out the worst aspects of human nature. She doesn’t interact with the other characters and is only there to redeem Lear – to bring him to maturity and to understand things like family bonds, as well as political realities: that you can’t give up all your power and expect to maintain your place in this greedy, vicious world.

Cordelia is more of a force or an ideal than a character, but if we are to regard her as a character in this drama then we would have to say that, unusually for Shakespeare, we have here a human being who is perfect. She is the ideal daughter, the ideal woman, perfect in her judgment and behaviour, calm and dignified. When Burgundy rejects her he begins to make a speech about it and she shuts him off kindly and with dignity:

Peace be with Burgundy;
Since that respects of fortune are his love,
I shall not be his wife.

She is modest yet with a boldness that places her among Shakespeare’s strong women, asserting herself in the cause of truth while at the same time doing it calmly and quietly, without any kind of drama. She is firm and loving. Later, when Lear is cast out by the two elder daughters, far from being critical of her father’s folly, she leads the French army to Britain to regain what her father has foolishly lost.

So much for her as a representation of an authentic human being. It is far more feasible to see her as almost a Christ figure, sent to redeem Lear, especially when she echoes a distinctly Christlike saying with O dear father/It is thy business that I go about in act 4 scene 4.  After several stage hours of torture, madness, violence, and betrayal, in which Lear loses his mind amid the chaotic noise of a violent storm, he wakes to the sound of music, and his daughter is at his side. She gives him her hand and raises him up. He spends his last hours in her arms. They are in prison. Lear has emerged from his madness, and it is during this time that he shows that he has come to understand the meaning of the bond between father and daughter, a bond which the elder two daughters have severed.

The imagery of the play is important in advancing its themes. Physical pain is present all the way through as characters suffer extreme torture. In one scene Gloucester has his eyes ripped out on stage. The imagery of body parts is ever-present, particularly hands. Regan is seen as a bird of prey with sharp claws and generally, it is human hands that commit the atrocities. We also see throughout, however, that hands are being used to help and uplift. At the end of the play, Cordelia takes Lear’s hands in hers and raises him up. In this play, human hands demonstrate the complete range of human behaviour – from torture and murder to divine help. The images of hands killing and torturing are balanced with images of hands blessing and raising up. Images of hands in both of those contexts are repeated throughout the play.

As they spend their last moments locked in a jail cell, Lear and Cordelia are physically and emotionally very close. Lear shows that, after being blinded by folly and madness, he can see clearly, in the sense that he has gained full and total insight into what is important in life. He has risen above everything – politics, materialism, power – and knows that the only thing of value is love: real love, not the false claims made by his daughters in the opening scene. Even being in prison is inconsequential: ‘We’ll sing like birds in a gilded cage,’ Lear says as they are being taken to prison. For Lear worldly affairs and politics have lost their meaning. He won’t care ‘who loses and who wins; who’s in, who’s out.’

Cordelia is hanged in the prison and Lear dies of a broken heart.

What shall Cordelia speak? Love, and be silent. (act 1, scene 1)

Unhappy that I am, I cannot heave
My heart into my mouth. (act 1, scene 1)

I love your majesty
According to my bond, no more nor less. (act 1, scene 1)