Feste is a character in Shakespeare’s play, Twelfth Night. He is a jester, employed by Olivia, a wealthy lady of Illyria. His job is to make her laugh and his particular skills are singing and dancing. He also moonlights, going to the houses of other wealthy people to perform for them.

Feste is a fairly central character. Although the main story is about the various tangled love affairs that go on in the play it is also a story about the goings-on in Olivia’s household, of which Feste is an important member. 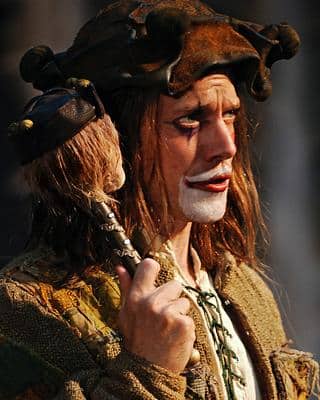 We use the word ‘fool’ these days to describe a foolish person but the fool in Elizabethan drama is a man who says and does ridiculous things specifically to make people laugh. That is ‘fooling’, and so he is a fool. But that is his profession and, in real life, he is a sharp, observant, clever and wise person, who is able to put on a good comic act.

The convention was that if there was a fool in a play you could bet that he would be the man who best knew what was going on. If there is a lot of dramatic irony (where the audience knows things that the characters don’t), for example, you can be sure that there will be one character who will have a knowledge and understanding of them. That will be the fool.

A fool should not be confused with a clown. The word ‘clown’ has changed. In Shakespeare’s time a clown was a simple rural man – a country bumpkin, a yokel.

One of the characteristics of the fool is that he has licence to speak truth to power with no holds barred – in a context where no-one else dare do that, for fear of their lives, in the case of monarchs and princes. Feste says outrageous things to Olivia, verging on calling her stupid, making her laugh at things that no-one else would dare say.

Another characteristic is that he acts like the chorus in Greek drama – commenting on the characters and the action for the benefit of the audience.

The fool does not normally have a dramatic role but some fools do, and Feste is one of those. He not only participates in the scheme to humiliate the unpopular steward, Malvolio, but takes  a leading part in tormenting him. In that sense Feste is quite cruel, and even though we may think Malvolio deserves what he gets, Feste perhaps lays it on too much.

In accordance with the convention Feste is the most intelligent character in the play. He is by far the wisest. He is probably the most famous of Shakespeare’s fools and he is a great example of the fool in Renaissance drama. He moves freely among the other characters and comments on what is going on among them. He has an extraordinary command of language. Olivia constantly asks his opinion. With his dramatic role in the play, and his conventional fool role, where he looks in at the action, he is both inside and outside the play, which makes him a marked innovation in drama, anticipating the postmodern plays of the 20th century.

The best assessment of Feste’s wisdom comes in the text itself where, in Act 3, Scene 1  Viola, the other very intelligent character in the play, has an encounter with him. Shakespeare actually pauses the action to allow her to comment on him in a strange soliloquy:

This fellow is wise enough to play the fool,
And to do that well craves a kind of wit.
He must observe their mood on whom he jests,
The quality of persons, and the time,
And, like the haggard, check at every feather
That comes before his eye. This is a practise
As full of labor as a wise man’s art,
For folly that he wisely shows is fit.
But wise men, folly-fall’n, quite taint their wit.

Better a witty fool than a foolish wit.

Cucullus non facitmonachum; that’s as much to say, as I wear not motley in my brain.

The more fool, madonna, to mourn for your brother’s soul being in heaven.

Youth’s a stuff will not endure.

The tailor made thy doublet of changeable taffeta, for thy mind is a very opal

Foolery, sir, does walk about the orb like the sun, it shines everywhere