Lady Macbeth is possibly Shakespeare’s most famous and vivid female character. Everyone, whether they have read or seen the Macbeth play, has a view of her. She is generally depicted in the popular mind as the epitome of evil, and images of her appear over and over again in several cultures. She is usually portrayed in pictures as something like a Disney character, a cross between Cruella DeVille and the wicked stepmother in Snow White.

Although she has some of the most bloodthirsty lines in Shakespeare she is not quite Cruella De Ville or the wicked stepmother. The response she gets from the male characters suggests that she is a young, sexually attractive woman and, indeed, in her effort to influence Macbeth, she uses every method at her disposal, including the employment of her sexual charms.

She is usually depicted as a strong, tough woman and, in her drive to induce Macbeth to murder King Duncan, she appears to be that, but, having succeeded, it does not take long for her to crumble and break down, destroyed by guilt, and she ends up committing suicide.

Shakespeare does not have any evil characters. What he has are ordinary human beings, like you and me, placed in situations that challenge and test them. Some of them, like Iago in Othello, have personality defects, but that’s rare in Shakespeare and it’s not the case with Lady Mcbeth.

The challenges that Shakespeare presents his characters with generates different responses from different people. Lady Macbeth’s challenge is that she discovers that her husband has been tempted by an encounter with three witches to do something about their prediction that he will become king. She knows that the king would have to die for that to happen. When she gets a message that King Duncan plans to spend the night with them at Glamys Castle it seems to confirm the thought that they would have to kill him and that this was their once in a lifetime opportunity. That’s the situation into which she has been thrust.

She is as ambitious as Macbeth but she knows that for all his bravery in battle, all his soldierly and diplomatic qualities, he is basically much too soft –“too full of the milk of human kindness” – to take advantage of the opportunity. She makes up her mind to make him do it.

And she is right about his lack of resolve – they talk it over and he tells her that he just can’t do it. She goes into high gear and virtually holds his hand through it. One of her strongest qualities is persistence and she shows it here. Macbeth hesitates, equivocates and falters but she holds firm. She argues the case, she mocks him, bringing his manhood into question, she appeals to his sense of loyalty to her, she takes him to bed, and she finally prevails.

Macbeth kills Duncan in his sleep and from that moment their marriage begins to fall apart. They each fall into their own guilt-trip and hardly speak to each other. As king, Macbeth fears his political enemies and embarks on a reign of terror while Lady Macbeth stays in bed, unable to sleep, having nightmares when she does manage it. While walking and talking in her sleep she gives the game away about what they have done and sinks into a moral, physical and spiritual collapse. When Macbeth is on his last legs, with the rebels closing in, he gets the message that she’s dead. At that point, he says he doesn’t have time to think about it. “She should have died hereafter,” he says. Their partnership in this murderous enterprise has destroyed their marriage.

The promise of strength that we see in her at the beginning of the play is an illusion. What we are seeing is naked ambition and a willingness to act on it without having the resources to deal with the consequences. We see how guilt can eat up your soul and destroy you. We see how hollow ambition is, both in her journey and Macbeth’s. (Read the most significant Macbeth ambition quotes.)

Some significant character attributes of Lady Macbeth are: 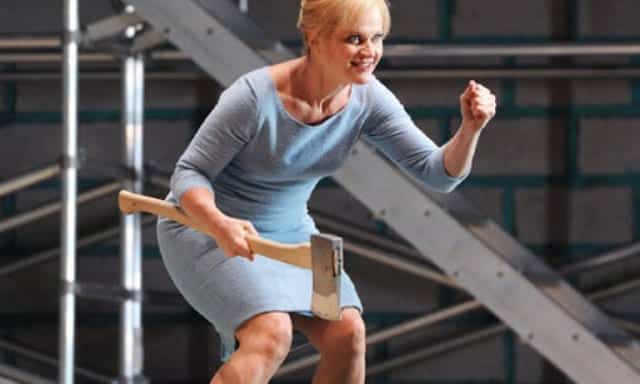 “I fear thy nature;
It is too full o’ th’ milk of human kindness

“To beguile the time,
Look like the time; bear welcome in your eye,
Your hand, your tongue; look like th’ innocent flower,
But be the serpent under’t.”

“Come, you spirits
That tend on mortal thoughts, unsex me here,

“Would’st thou have that
Which thou esteem’st the ornament of life,
And live a coward in thine own esteem,
Letting “I dare not” wait upon “I would,”
Like the poor cat i’ th’ adage? “

“I have given suck, and know
How tender ’tis to love the babe that milks me.
I would, while it was smiling in my face,
Have plucked my nipple from his boneless gums
And dashed the brains out, had I so sworn as you
Have done to this.”

Is Lady Macbeth a true story?

Although Shakespeare used the names of real historical people in writing Hamlet, the events of the drama are mostly made up. So in that sense, Lady Macbeth is not a real character. There was an 11th-century Scottish king named Mac Bethad Mac Findlaich. Presumably, he had a wife but we know nothing about her.

What kind of character is Lady Macbeth?

Lady Macbeth is ambitious. She is manipulative and uses several techniques of a skilled manipulator to entice Macbeth into the murder of Duncan. Usually thought of as a hard, ruthless woman, she is, in reality, soft. Not long after the murder, unable to cope with her guilt, she falls apart and loses all sense of herself.

What happens to Lady Macbeth?

Lady Macbeth tries to prop her husband up as he descends into a guilt-ridden hell but she soon falls victim to the same condition. Her whole life literally becomes a nightmare, in which she relives the event that has brought her condition about. Her life becomes unbearable and she commits suicide.

Who does Lady Macbeth kill?

Lady Macbeth does not personally kill anyone. She conspires in the murder of the king, Duncan, though, and actively encourages Macbeth to kill him. It is Macbeth who does the actual killing. Lady Macbeth plays no part in the many further killings that Macbeth engineers. Soon after the killing of Duncan the two don’t even talk to each other.

What made Lady Macbeth go crazy?

Lady Macbeth is partly responsible for the kind of killing that was taboo in Mediaeval Scotland – murdering one’s king, murdering one’s relative and murdering a guest in one’s house. In killing Duncan the couple did all three. She begins to have nightmares about the murder and, in particular, the blood on her hands, which she can’t get rid of no matter how hard she scrubs. That drives her to suicide.

How does Lady Macbeth feel after the killing of Duncan?

Once Duncan is killed Lady Macbeth is pleased that her ambition to be the wife of a king has been achieved, but that feeling very soon turns sour as guilt begins to eat away at her. She then she has feelings that she can’t live with, and ends up killing herself (one of 13 suicides in Shakespeare’s plays).

No. Lady Macbeth is a 2016 British film based on Nikolai Leskov’s novella Lady Macbeth of the Mtsensk District, and starring Florence Pugh.