Laertes is a character in Shakespeare’s play Hamlet. He is the son of Polonius, chief aide and counsellor to the King. He’s the brother of Ophelia, with whom Hamlet has been having some kind of romantic relationship.

The three grew up in Elsinore, the royal castle, and know each other well. Laertes and Hamlet have been friends since childhood and as the play opens they are in their twenties. However, the tensions among the three become very strained during the action of the play. The death of Hamlet’s father has brought him back from university, only to find that his mother has married his father’s brother, Claudius. Both events have left Hamlet in a state of confusion and despair. To make things worse, Hamlet’s father’s ghost appears and tells him that he has been murdered by his brother, who has gone over Hamlet’s head and taken possession of the throne. 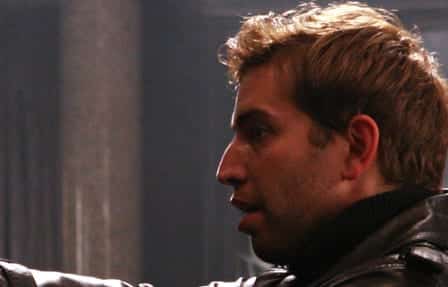 Laertes played by Edward Bennet for the BBC

While this is happening Laertes is embarking on his own new life, at university in Paris.

Shakespeare has set up a structural and dramatic dynamic with these two young men on the same journey – revenge for the deaths of their fathers. By doing that he is able to make comparisons between the way they differ in their personalities and the way they go about the process of taking revenge. That is important as one of the reasons that Hamlet is often regarded as the best and most profound play ever written is the depth that Shakespeare achieves in his exploration of Hamlet’s mind as he grapples with this predicament. By giving Laertes the same problem, to which he makes the exact opposite response, Shakespeare is able to make comparisons, and thus highlight the response of Hamlet in even greater depth. A character used in that way is a device known as a foil, so in literary terms, we say that Laertes is a foil to Hamlet. Shakespeare intensifies this further by introducing another character – another foil – young Fortinbras, a prince of Norway, who is also on a quest to avenge his father’s defeat in a military conflict, and his death. Although he’s a very minor character he lurks in the background, while constant references to him provide further comparisons.

Laertes’ character is the key to the contrast Shakespeare wishes to make. It is the complete opposite of Hamlet’s. He is impulsive, bordering on recklessness; he is a swift actor, rushing back as soon as he hears about his father’s death, raising a crowd of followers in the process, and invading the castle, shouting and demanding revenge. Hamlet does none of the above: he quietly reflects and agonises, examines the dilemma from every angle, and becomes paralysed and unable to do anything about it.

The questions that Laertes should ask before jumping in should be done before the action but he acts first and asks questions later. Hamlet asks endless questions and fails to act until the dilemma resolves itself without Hamlet having to make any decisions.

In spite of the two different personalities and approaches, ironically, both young men end up dead, killed by each other’s hands. However, apart from the use of Laertes as a foil, his presence in the play provides great theatrical moments filled with violence, passion and action – all things that audiences love.

Laertes has some of the most significant Hamlet quotes. Here are his very best:

To this point I stand,
That both the worlds I give to negligence,
Let come what comes, only I’ll be revenged
Most thoroughly for my father. (act 4, scene 5)

Lay her i’ th’ earth,
And from her fair and unpolluted flesh
May violets spring! I tell thee, churlish priest,
A minist’ring angel shall my sister be
When thou liest howling. (act 5, scene 1)

I am justly killed with mine own treachery. (act 5, scene 2)

Fear it, Ophelia; fear it, my dear sister,
And keep you in the rear of your affection,
Out of the shot and danger of desire.
The chariest maid is prodigal enough,
If she unmask her beauty to the moon.
Virtue itself ‘scapes not calumnious strokes.
The canker galls the infants of the spring
Too oft before their buttons be disclosed,
And in the morn and liquid dew of youth,
Contagious blastments are most imminent.
Be wary then, best safety lies in fear.
Youth to itself rebels, though none else near. (act 1 scene 3)

Too much of water hast thou, poor Ophelia,
And therefore I forbid my tears (act 4 scene 7)

Hold off the earth awhile,
Till I have caught her once more in mine arms. (act 5 scene 1)