Lear is the main character in Shakespeare’s play, King Lear.

King Lear is often cited by critics as Shakespeare’s greatest play. Not everyone would agree with that, although no-one would doubt that it’s a great play. Every Shakespeare lover has an opinion about what Shakespeare’s greatest play is, and they don’t always agree. It always comes down to a question of taste. Almost all of them are great plays. How could one choose between Macbeth and King Lear, or between The Tempest and King Lear, or Romeo and Juliet, Much Ado About Nothing, A Midsummer Night’s Dream, Henry V, Othello? They are all different – and all great plays.

But certainly, King Lear is a big play. Where would one begin trying to explain it? The language is a poetic miracle –  the interacting patterns of imagery are remarkable. The characterisation is phenomenal, and one could never exhaust an exploration of the themes and ideas Shakespeare juggles and interweaves in that text.

It is also a difficult play. Critics often say that although it’s one of the greatest works of literature in the English canon it doesn’t really work on the stage. The reason they usually give is that, unlike his and other dramatists’ plays, that have a main, dominant, plot, with the main characters acting out their stories, and a sub plot that bears to a larger or lesser extent on the main plot, King Lear has something more like two main plots. The action moves from one to the other, back and forth, and each change distracts the audience, who is then distracted again by the next change. 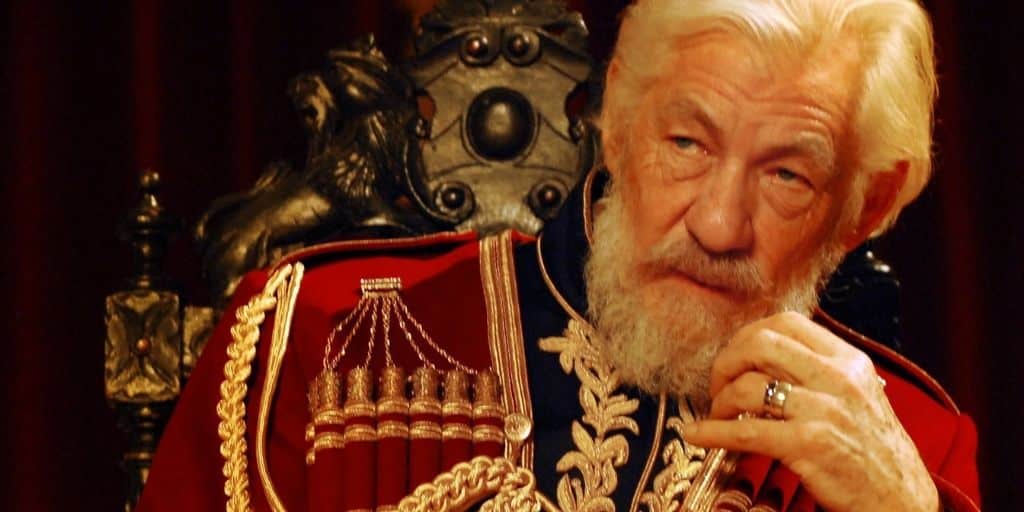 The story of King Lear

And so, the question, when talking about King Lear is, where to begin.

Above all things, Shakespeare was a storyteller. That was what the audience wanted. The writer who could offer them the best stories, with violence, sex, and laughter, with short gripping scenes full of action conducted by identifiable characters, was the one whose plays they would flock to. Shakespeare was that writer, along with a few others, with whom he collaborated.

Shakespeare knew about stories. He looked for them everywhere – in history, in the ancient world, in travel books, in the plays of other playwrights, in philosophical writings and in the books and essays that were being published in his own time. Regarding King Lear, and more particularly, the character, Lear, he took the story from a few thematically related ancient fairytales.

Let us consider that. Lear is a king. His most distinguishing feature is that he is very old. He likes being the king but he’s tired of working as a king and wants to retire. He envisages a semi-retired lifestyle where he hasn’t abdicated – remains king – but offloads the work onto his three daughters, dividing the kingdom into three parts, leaving each to administer her section and to enjoy the income from it. His plan is to rotate around the three daughters, staying with each one for a few months of the year, accompanied by his knights. They would go hunting during the day and feast and get drunk at night.

He brings his daughters together and, in the presence of the whole court, announces his plan. He tells them that the size of each one’s portion would depend on how much she loves him. He instructs them to tell him in turn, and sits back to enjoy it.

The eldest is very effusive in the profession of her love for her father – more than eyesight, more than life itself. He’s very pleased and carves her portion out on the map laid out before the court. The second daughter says she loves him even more than the first, and elaborates. Very pleased, he marks out her portion on the map. Then he turns to the youngest, making no secret of the fact that she’s his favourite. She tells him that she loves him according to what the bond between a parent and child demands and the duty she owes to the man who has raised her.

Lear tries to coax her into amending her statement but she says she has nothing to add, and that, unlike her sisters, she is not a hypocrite. He explodes in anger, instantly banishes her, and threatens anyone who tries to help her. He gives her to the King of France without a dowry, telling him to just take her away.

King Lear’s roots in ‘The King and the salt’

That is an adaptation of an ancient story – a folk or fairy tale – The King and the Salt. In this story the youngest daughter tells the king that she loves him as much as meat loves salt. He’s immensely insulted by that and banishes her. A few years later, the daughter, having gained a reputation for being a great cook, returns to her father’s castle as a cook. He doesn’t know who the cook is, he just enjoys the food. One day the food tastes bland and unappetising and he sends for her and tells her he can’t eat it. She tells him that it’s missing an ingredient. He tries to guess but fails. She tells him that she has not put any salt in it. He looks at her for the first time and recognises her. He instantly understands what this is about and, recognising how much she had loved him when he’d asked her, he reinstates her as his beloved daughter.

We can see now, how Shakespeare takes the skeleton of an ancient story and fleshes it with characters and action and poetry into something the world regards as a great work of theatre and a great work of literature.

Lear’s story continues to follow the folktale, with this deviation. Before his two elder daughters leave the room, they are already laughing at his stupidity. An old man whose mind is faltering. How could he think for a moment that he could give all the source of his power away and expect to be respected? Having done that he has no power and, more to the point, no protection. What political naivety! He’s really losing it!

When he goes to the first daughter she soon tells him to get rid of most of his knights. After a few days she tells him not to make such a noise in the evenings. She reprimands him with harsh language and encourages her servant to disrespect him. He leaves her in tears and rushes to the second daughter. He complains to her about the way her sister has treated him. She tells him to go back to her sister, that she doesn’t want him. He begs her and she makes it clear to him that she regards him as a pathetic old man with a deteriorating brain, and if she has to look after him, which she doesn’t want to do, it must be without a single knight.

In a state of extreme distress Lear rushes away, into the open countryside, even though there is a violent storm. He has just one servant with him. They find shelter in a broken down shed. His dementia becomes worse as he rants and rages in the violent storm. He endures various deprivations and is even stripped of his clothes. He eventually falls into a coma.

The sisters fall out, and now they have to contend with a new factor. The youngest sister has returned with an army led by her husband, the king of France, bent on recovering her father’s lands. The elder sisters’ forces capture both Lear and the youngest daughter and put them in a cell together. Lear wakes up in her loving arms. She soothes him and blesses him and he understands how much love there is in the bond between a daughter and her father and how much a daughter is prepared to do as a duty to the man who has raised her and loved her. He has learnt the hard way that hollow expressions of love are meaningless and that real love exists in actions rather than words.

It is the king discovering how much meat needs salt.

King Lear is very much more than a version of a folktale, of course. In his journey Lear learns much more than the meaning of the bond with his child. He has understood that he has grown old without gaining wisdom. He has learnt the meaning of friendship, and many other things, and his story ends when he dies of a broken heart after his child is hanged by her sisters

That is the story of Lear.

“When we are born, we cry that we are come to this great stage of fools.”

“Nothing will come of nothing: speak again.”