Macduff  is a character in Macbeth.  He is the backbone of a story in which we see the main protagonist, Macbeth, sinking into mental, moral and political chaos, committing the most horrendous crimes against his people in the process. It is up to Macduff to take action, and he does, in the most decisive and determined way. He is about the only tough, manly heroes in Shakespeare who breaks down and cries openly. When he receives the news that Macbeth has murdered his whole family he stops what he is doing and weeps for them. Malcolm, the rightful heir to the throne of Scotland tells him to dispute the slaughter of his family like a man. Macduff tells him: “I shall do so; but I must also feel it like a man.” 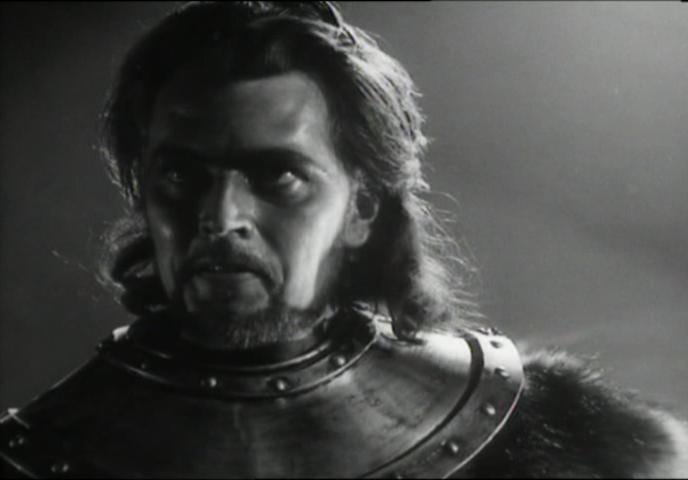 When Macbeth is told by three witches that he will one day be king of Scotland he begins to think about it as a real possibility and in discussion about it with his wife, Lady Macbeth, she convinces him that the only way is to murder the king, Duncan. They plan it and Macbeth carries it out while Duncan is sleeping.

When Macduff arrives at Mabeth’s castle in the morning to go hunting with Duncan Macbeth pretends to discover the murder of the king. Macduff suspects Macbeth of the murder and becomes a target when Macbeth, now king, begins murdering his opponents. Macduff goes to England to join Duncan’s son Malcolm who is working with the English king to raise an army to confront and overthrow Macbeth. Macbeth commissions murderers to invade Macduff’s castle and right in the middle of the play we see them murdering Macduff’s son, a little child, onstage. The slaughter of the rest of the family follows.

Macduff, Malcolm, and the English forces arrive in Scotland and corner Macbeth in his castle at Forres. A battle follows and eventually Macduff comes face to face with Macbeth. The witches have told Macbeth that he can never be vanquished by any man born of a woman. Everything the witches have told him has come to pass so he laughs at the mortal Macduff’s effort to overcome him. Macduff then informs him that he was not born normally of a woman but by a Caesarian birth. He says: “Macduff was from his mother’s womb untimely ripped.” They fight, and the next time we see Macduff he is arriving at the gathering of the victors – Malcolm and the English generals – carrying Macbeth’s severed head. “Behold, where stands the usurper’s cursed head.” he proclaims, and they all kneel down before King Malcolm.

Throughout the play, we see in Macduff a man of honesty, rectitude and true feeling. Macbeth is portrayed in the same way, with the addition of being a great and popular hero. Shakespeare is demonstrating how a truly great soldier, patriot, and human being can be corrupted by ambition. Macduff is not subjected to the same temptation, of course, but in him, we see a man with the same qualities surviving to live an honourable life, in contrast to the path taken by the corrupt Macbeth.

O gentle lady,
‘Tis not for you to hear what I can speak.
The repetition in a woman’s ear
Would murder as it fell. (Act 2, Scene 3)

All my pretty ones?
Did you say “all”? O hell-kite! All?
What, all my pretty chickens and their dam
At one fell swoop? (Act 4, Scene 3)

Boundless intemperance
In nature is a tyranny. It hath been
The untimely emptying of the happy throne
And fall of many kings. (Act 4, Scene 3)

Despair thy charm,
And let the angel whom thou still hast served
Tell thee, Macduff was from his mother’s womb
Untimely ripped. (Act 5, Scene 8)

Hail, King! for so thou art. Behold, where stands
Th’ usurper’s cursèd head. The time is free. (Act 5, Scene 8)