Malcolm is a character in Shakespeare’s play, Macbeth. He is the elder son of the King, Duncan, who is murdered by Macbeth early in the play. Although the Scotland of the play has an elected monarch Duncan has named Malcolm as his successor.

Duncan’s pronouncement of his son as the future king is a contributing argument in Macbeth’s decision to kill him as soon as possible.

Malcolm and his younger brother, Donalbain, are accompanying their father on his visit to Macbeth and are right in the middle of it when the assassination happens. When Duncan’s  body is discovered his sons, fearing that suspicion will fall on them, flee, leaving Macbeth to claim the throne.

Malcolm goes to England, where he lobbies the English king to help him raise an army to return to Scotland to overthrow Macbeth. He does raise the army and, with the help of some of the most powerful thanes, and the English forces, he returns to Scotland and his troops defeat Macbeth’s army.

In spite of the importance of Malcolm’s role in bringing Macbeth down he is not in any way interesting. He is not developed as a dramatic character in the drama and, unlike most of the characters in Macbeth, we know nothing about him as a person except that he talks a lot. 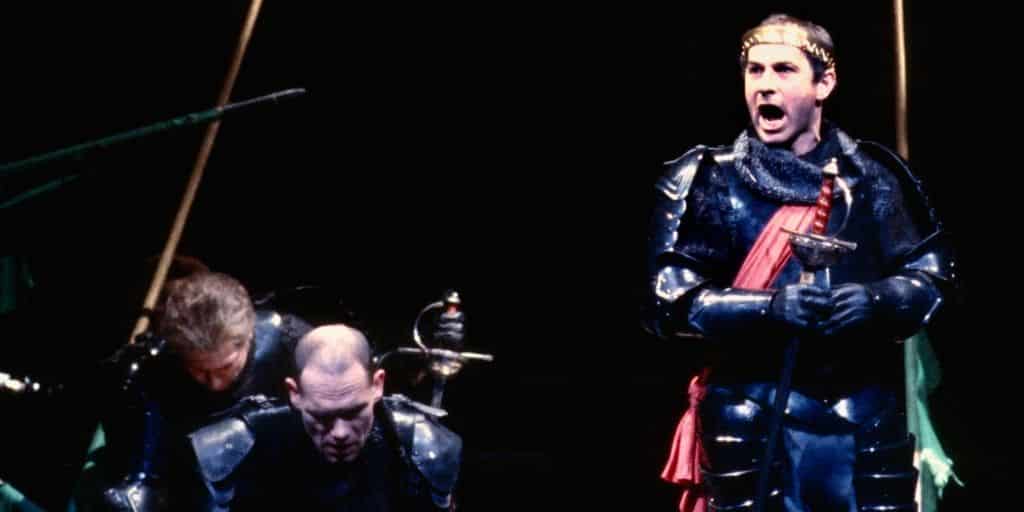 Nicholas Woodeson as Malcolm in the RSC‘s 1986 Macbeth production

His function in the text is to represent order – fixed, unyielding order – in contrast to the chaotic nightmare that Scotland has become under Macbeth. Malcolm is like his father, whose job it was to punish wrongdoing, reward good acts and keep things going on an even keel. Macbeth has disrupted all that and everything is upside down, with good acts being punished and wrongdoing rewarded.

The longer Macbeth holds power the more chaotic things become, with his opponents, or suspected opponents, being routinely murdered. Order has been subverted and we see this in the way nature is responding: there are huge storms, horses are biting their grooms and fleeing from their stables; the birds that are normally the prey of owls are turning on their predators.

The only scene in Macbeth that is not fast-moving and engaging is the long conversation Malcolm has with Macduff. Macduff has come to England to join Malcolm in his military mission of returning to Scotland to overthrow Macbeth. Malcolm tells him that he, Malcolm, has ambitions to be a dictator, a tyrant, and that, as king, he will be bloodthirsty, vengeful, and oppressive.

He describes the kind of things he will do in great detail then asks Macduff if he still wants to help him take the throne. Macduff tells him he won’t and Malcolm then says that he was just testing him to find out what his attitude was, and whether his motives are genuine. But it is a long, tedious, speech.

That is a scene that directors looking for places where they could take something out to shorten a performance, frequently cut, as it has little dramatic effect. The scene only livens up towards the end when a messenger comes to tell Macduff that Macbeth has invaded his castle and slaughtered everyone – his whole family and all the servants.

Although it is an army composed of Malcolm’s troops and those of an English general, there is no personal engagement between Malcolm and Macbeth. This is definitely not a revenge play in the sense of a son seeking to avenge his father’s murder, although there is an element of revenge on the part of Macduff, who is the one who has the final showdown with Macbeth, defeating him with such commitment that after killing Macbeth he decapitates his body.

Malcolm shows no emotion throughout, not even to express sorrow at what the Scottish people have endured under the tyrannical Macbeth. What we get instead is a steady, unemotional commitment to the restoration of order.

We shall not spend a large expense of time
Before we reckon with your several loves,
And make us even with you. My thanes and kinsmen,
Henceforth be earls, the first that ever Scotland
In such an honour named. What’s more to do,
Which would be planted newly with the time,
As calling home our exiled friends abroad
That fled the snares of watchful tyranny;
Producing forth the cruel ministers
Of this dead butcher and his fiend-like queen,
Who, as ’tis thought, by self and violent hands
Took off her life; this, and what needful else
That calls upon us, by the grace of Grace,
We will perform in measure, time and place:
So, thanks to all at once and to each one,
Whom we invite to see us crown’d at Scone.

In this closing speech, restoring order to the bleeding Scotland, Malcolm praises those who have helped him, rewarding them with earldoms; he recalls the exiles, and promises to do everything that needs to be done. He is creating a measured, correct, kingdom, as an administrator, although without shedding a tear for those who have suffered.

Here, Malcolm praises his friends; gives them a reward by making them earls; calls back all the exiles; and then, finally, says that he’ll do everything that needs to be done, “in measure, time and place.” He’s reuniting the kingdom, surrounding himself with loyal friends, and promising to take care of the to-do list—all without shedding a single tear.

This murderous shaft that’s shot
Hath not yet lighted

Cousins, I hope the days are near at hand
That chambers will be safe

We shall not spend a large expense of time
Before we reckon with your several loves.