Osric is a minor character in Shakespeare’s play, Hamlet.

Shakespeare’s texts abound with unnamed characters who make brief appearances. They are the messengers, guards, soldiers and other functionaries that inhabit the Elizabethan world. Some have minimal speaking parts and some do not speak at all. Osric does have a speaking part and Shakespeare does a lot with that.

Osric is one of Shakespeare’s most famous and entertaining minor characters. Although he doesn’t have a dramatic function he appears in two scenes and has a speaking part. He is sent by the king, Claudius, to invite Hamlet to a fencing duel with Laertes, during which they plan to murder him.

Osric then presides over the duel scene and acts as the referee. During the course of the play all of the courtiers who have been drawn into Claudius’ plot against Hamlet die, several in that final scene. Osric is the sole survivor.

In Shakespeare, minor characters are usually more than just cardboard cutouts. Even if they do not have dramatic roles they contribute towards the literary unity of the text. When it comes to Osric, that is particularly true and he is presented in such a way as to illustrate several themes and concerns of the text.

Osrick appears at the point where Hamlet, now recovered from what has looked like a nervous breakdown throughout the play, is talking to his friend and sole confidant, Horatio. He is talking calmly and explaining that he is now reconciled to what has happened in his family, and that he will leave it to fate to sort it out.

Osrick has come to deliver the invitation to the duel. He interrupts the friends’ conversation. Hamlet knows Osric and does not like him. Osric is a young landowner and a typically corrupt and sycophantic courtier. Hamlet whispers his negative opinion of Osric to his friend.

Throughout the play Hamlet has shown two very striking approaches to courtiers. He makes fun of them and he uses biting language when talking to them. In fact, his language is so sharp that it amounts to cruelty. That is particularly marked in his conversations with Polonius and Ophelia. And now he does the same kind of thing to Osric.

Elizabethan courtiers wore hats indoors as part of the court ‘uniform.’ In modern productions of Hamlet we see them all without hats but in Elizabethan performances courtiers, including Hamlet and Horatio, would have been wearing hats. Hamlet’s first words to Osric are to tell him bluntly to put his hat on. Osric is holding his hat and, it seems, making flourishing gestures with it as he bows to Hamlet.

Osric then seems to be fanning himself with his hat. He says it’s hot. Hamlet contradicts him, saying no, it’s cold. Osric agrees that it’s quite cold. Hamlet then says that on second thoughts it’s very hot. Osric agrees. That is a trick that Hamlet enjoys as he likes to bring out the sycophantic responses of courtiers he doesn’t like, and watch their sycophantic acrobatics.

Hamlet frequently interrupts as Osric delivers the invitation, deliberately misinterpreting things he says. Osric is bowing and scraping during all this and the scene ends with Hamlet telling him to deliver his acceptance of the invitation, using whichever flourishes and bowing gestures he likes as he does so.

Osric is largely characterised by the language Hamlet and Horatio use in their descriptions of him. ”Dost know this waterfly?” Hamlet whispers as Osric approaches them. Waterflies are insects that dance aimlessly to and fro over the surface of water. Also, they are irritating and regarded as insignificant.

Hamlet is in mourning and wears a black suit throughout. Osric is draped in colour. The reference to an insect in relation to Osric creates the image of the garb of the Elizabethan courtier. The long doublet and hose frequently ornamented with ribbings, spots, and stripes were suggestive of insects, and the wearer, with his winged triangular cloak and bee-headed bonnet, must have been in character with the Elizabethan court drones who hummed and buzzed around their queen.

Hamlet tells Horatio that he is lucky that he doesn’t know Osric, suggesting that if he knew him he would be appalled by him. He calls him a chough, which is a babbler, and a bird attracted by glittering objects.

Osric’s scene, in which he plays in a comic cameo, also offers a bit of light relief before the heavy drama to come in the final scene.

And so, we see, in Osric not regarding the comedy, an image of the decadence and corruption of the Danish court, a theme that runs though almost every one of Hamlet’s soliloquies. Osric represents the showy, fashion-driven Elizabethan courtier. He has acquired a position at court because of his wealth and the land he owns. He is not very bright and thinks he is being intelligent in the way he speaks but is easily taken apart and made a fool of by Hamlet, who is truly intelligent. 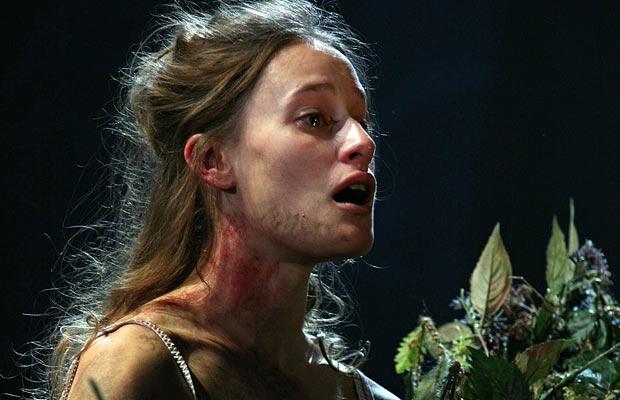