Portia, The Merchant of Venice

You are here: Home1 / Shakespeare Characters2 / Portia, The Merchant of Venice

Portia is a character in Shakespeare’s play, The Merchant of Venice. She’s not exactly like the characters usually classed as strong women in Shakespeare (like Rosalind or Lady Macbeth) because she isn’t called on to make a stand on anything, do something courageous, or defy some of the obstacles stacked up against women in Elizabethan times. But she’s not one of the oppressed women either.

Portia is one of Shakespeare’s women who appear disguised as men through most of their presence on the stage. Apart from the dramatic function of this trick, Shakespeare used a gender switch as a way of putting less strain on the audience’s suspension of disbelief. The boy actor would come on as a woman then, soon after, disguise herself as a man and, being a male himself, appear more realistic, and that would be a little more comfortable for the actor – a boy playing a boy. He would do that through most of the play then reveal himself as a woman in the last scene. 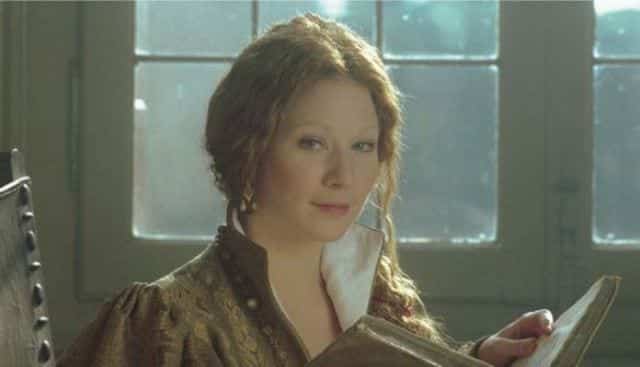 Lynn Collins plays Portia in The Merchant of Venice

Portia, an only child, has recently lost her wealthy father, a citizen of Belmont. He has doted on her and, unusually for the time, educated her to the point where she has become a legal scholar. She is also beautiful, and knowing that because of her beauty and because of her wealth, she will be pursued by the good and the bad, many of them fortune hunters, he devised a scheme to try and ensure that she would end up with a worthy husband.

He has stipulated that wooers would have to choose one of three caskets –  gold, silver, and lead. One of them would contain her portrait and the first to choose that would be a suitable husband.

One of the suiters is the penniless Bassanio of Venice. He has borrowed the money to try his luck with Portia from his friend Antonio, a Venetian merchant.

Antonio has had to borrow the money to lend Bassanio from a Jewish moneylender, Shylock, as his ships are late and he won’t have the money until they arrive. Shylock has jokingly said that if Antonio is late with the payment the penalty will be a pound of his flesh. Antonio has agreed to that.

In the event, the ships are late. At the same time, Shylock’s daughter has eloped with a Christian and taken his money and jewellery. He is enraged by the way the Christians have behaved and demands his pound of flesh. He appeals to the Duke to hold a trial and give him his rights.

In the meantime, Bassanio has chosen the right casket and is engaged to Portia. He learns that the Duke of Venice doesn’t know how to deal with the case and asks Portia to disguise herself as a famous young law scholar and act as a judge in the case, which she does. There is a court case in which Portia shows a great deal of knowledge, creativity and intelligence, and while granting Shylock the pound of Antonio’s flesh, rules that it is illegal for anyone to shed a drop of Christain blood. He can cut his pound of flesh from Antonio’s body but he can’t shed any blood or cut an ounce more or less than the pound. Shylock is therefore defeated.

Portia’s main claim to fame in the halls of English dramatic literature is that she delivers one of the most famous monologues, filled with some of Shakespeare’s most beautiful poetry, expressing some of the wisest sentiments that exist in any play: The quality of mercy is not strained.

As a character in a Shakespeare play, Portia is interestingly different from most characters. She doesn’t actually have a dramatic role in the story, although that sounds ridiculous as her conduct of the trial and her judgment are hugely dramatic. However, she plays little part in the development of the main story. It is a story about Venetian society and the relationship between Christians and Jews with its set of characters that develop the story. There is a trial in the story and that’s where Portia comes in. She, an outsider, and Shylock, a major character in the main story, dominate this long scene.

Although we see Portia as a virtuous, honest young woman, somewhat playful, and with a sense of humour, none of her characteristics play any part in the drama in the sense that Juliet’s or Cleopatra’s or Lady Macbeth’s qualities and personalities are organic to the drama. All we need from Portia is that she be a good lawyer. What kind of person she is is neither here nor there. Juliet’s impatience, Lady Macbeth’s ambition, and Cleopatra’s fickleness are major plot drivers: they are all central characters in the story of the play they are in. Portia is not.

It is a good divine that
follows his own instructions. (act 1, scene 2)

If to do were as easy as to know what were good to
do, chapels had been churches and poor men’s
cottages princes’ palaces. It is a good divine that
follows his own instructions: I can easier teach
twenty what were good to be done, than be one of the
twenty to follow mine own teaching. (act 1, scene 2)

The brain may
devise laws for the blood, but a hot temper leaps
o’er a cold decree. (act 1, scene 2)

Beshrew your eyes,
They have o’erlook’d me and divided me;
One half of me is yours, the other half yours,
Mine own, I would say; but if mine, then yours,
And so all yours. (act 3, scene 2)

How far that little candle throws his beams!
So shines a good deed in a naughty world. (act 5, scene 1)

The quality of mercy is not strain’d,
It droppeth as the gentle rain from heaven
Upon the place beneath: it is twice blest;
It blesseth him that gives and him that takes. (act 4, scene 1)