You are here: Home1 / Shakespeare Characters2 / Prospero, The Tempest

Prospero is the main protagonist of Shakespeare’s play, The Tempest. He is probably the most unusual of Shakespeare’s major characters in that, although he is a human being with human qualities, including human faults, he has magical powers: he has the ability to control the weather, the conditions on the island on which he lives, and also the actions and movements of people and the spirits who also live on the island.

Fifteen years before the opening of the play he was deposed as Duke of Milan by his brother, Antonio, who gave instructions for his execution, together with his baby daughter, Miranda.

Prospero had taken his eye off the ball by neglecting his duties when he was Duke of Milan, leaving governing to Antonio, and spending his time reading and studying philosophy and science. There was a kind of arrogance in him which led him to believe that he could have it both ways – be a private man indulging in his personal interests while at the same time governing a major modern state. 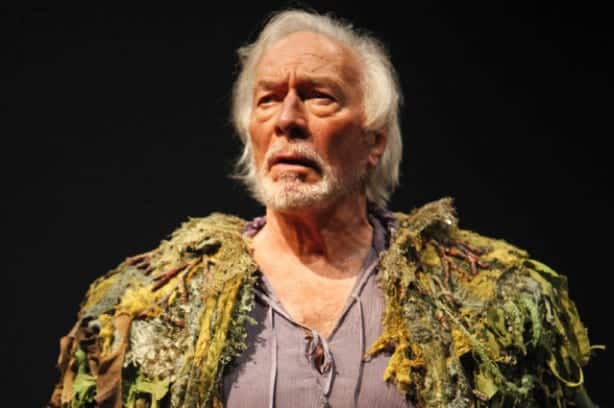 Prospero as played by Christopher Plummer

One of the councillors, Gonzalo, defied the order and put them in a little boat and set it adrift. He stocked the boat with Prospero’s beloved books.

The boat washed up on a remote Mediterranean island and now, fifteen years later, the action begins with Prospero and the teenage Miranda standing on a cliff watching a ship being wrecked in a storm that Prospero has created to effect that. In the past fifteen years, with uninterrupted study, he has mastered the art of magic and has the ability to create any weather conditions he likes.

The ship is bringing Alonso, King of Naples, and his guests back from his daughter’s wedding in Algiers. It seems that everyone on board is drowned but the royal party and some servants have been thrown up on the island, including Alonso, his brother Sebastian, Prospero’s brother Antonio, the old councillor, Gonzalo, a butler, and the king’s jester.

Alonso’s teenage son, Ferdinand, has been separated from the group and has landed on another part of the island. He believes that everyone else was drowned.

Prospero has used magic to bring them to the island with the intention of making them see the error of their ways. We see that beneath his severe and autocratic behaviour he has a forgiving heart.

Alonso, Sebastian and Antonio are politicians in some of the world’s most sophisticated states and are infected with corruption. They are now on an island – a rural, unsophisticated place from which they have no means of escape – where they can be refreshed and renewed because there are none of the structures of European political systems on this island.

Moreover, there are two very young people in the forefront of the action – Ferdinand, too young to have been affected by the staleness and corruption of political life, and the completely innocent Miranda, who has never seen another human being apart from her father. ‘Oh brave new world that has such people in it,’ she exclaims when she sees the party dressed in the clothes of European aristocracy. When they emerged from the sea Prospero made their clothes appear freshly laundered.

Prospero watches the shipwrecked passengers by getting reports from a servant, Ariel, a spirit, who can fly, make himself invisible and take on different forms. The king is in a kind of daze, heartbroken by what he thinks is the death of his son. Amazingly, although possibly never being able to return to Milan and Naples, Antonio draws the king’s brother, Sebastian into a plan to overthrow the king, an echo of what he has done to his own brother. So we see European political corruption being imported on to the island as all the corruption and intrigue are pointlessly played out on the island.

Ferdinand and Miranda see each other and, as anticipated and directed by Prospero, they fall in love. The butler and the jester meet Prospero’s slave, Caliban, who believes he has a claim on the island, and together they plan to overthrow Prospero.

All these dramas play themselves out before Prospero’s eyes and at the end of the play, he pulls it all together and forgives and pardons everyone. He denounces his magic powers and plans to return to Milan to take up his duties as Duke. He will be accompanied by the young couple, a new generation who will bring their freshness to the stale old European system.

A character analysis of Prospero is complicated by his being a magician. So the question is, what are we seeing when we look at Prospero? A complete human being who has to rely on his natural resources, or someone above the need for that, who lives his life by practicing magic?

We think of Prospero as a wise, compassionate man, using his magical powers to eventually bring about forgiveness and redemption, but he has only arrived at that point after overcoming his weaknesses. Even in the last stages, he is a control freak and a manipulator. In his early life, he was a weak leader, contemptuous of the role he was expected to play, and therefore deserving of his political downfall, although that does not excuse his brother’s actions.

Prospero can be seen as an authoritarian dictator. He has colonised and taken over Caliban’s island; he manipulates his daughter and her young suitor; he is cruel in his treatment of Caliban, and also Ferdinand, and keeps Ariel in a state of servitude by using draconian threats. He causes suffering to his enemies so that he can bring them together and judge them.

Much of the above is behaviour with good intentions but still, the effect is the suffering of others. Magic or no magic, he is quite prepared to hurt others. However, ultimately, he is a humane man: he understands that the ability to forgive and be merciful is what makes us human.

He has the capacity to learn the lessons of life and finally becomes secure enough to abandon his magic and live the life of a fully responsible human being without relying on it to help him.

What is Prospero in The Tempest?

Prospero is the main character in The Tempest. He is the Duke of Milan who was overthrown by his brother Antonio fifteen years before the start of the play and cast adrift in a boat with his baby daughter, Miranda. During those fifteen years he studied and taught himself how to do magic.

Why is Prospero important in The Tempest?

How does Prospero change throughout The Tempest?

If you think about the character sketch of Prospero, he is bent on revenge for what was done to him by his brother, Antonio.  He uses magic to bring his brother to the island which he and his teenage daughter Miranda occupy by raising a storm to wreck the ship on which his brother is travelling. By the end of the play he has developed compassion and he forgives his brother.

What do Prospero’s books represent in The Tempest?

When Prospero was deposed as Duke of Milan and set adrift in a boat he took all his books with him. He studied science for years. Elizabethans believed that if you studied hard enough you could end up knowing everything that there is to know. If you managed that then there was just one step further than knowing everything in the natural world. That was gaining insight into things beyond the natural world, and that was magic. So the books are the key to mastering magic.

How does Prospero use magic in The Tempest?

Prospero uses magic to control everything on the island of which he is the complete master, including the weather. He is not only able to control the actions of all the other characters, including the spirits that live on the island, but to observe them with the help of a servant spirit, Ariel., who makes himself invisible, spies on everyone and reports back to Prospero.

Who wants to kill Prospero in The Tempest?

Caliban wants to kill Prospero. When Prospero landed on the island there was only one inhabitant – the savage Caliban, son of a now-dead witch, Sycorax. Before Prospero’s arrival, he was free to roam around the island and please himself but Prospero enslaved him and made him labour for him. When a ship is wrecked and the survivors come on to the island Prospero recruits two of them to help him overthrow and kill Prospero.

“If thou more murmur’st, I will rend an oak
And peg thee in his knotty entrails till
Thou hast howled away twelve winters.”

We are such stuff
“As dreams are made on, and our little life
Is rounded with a sleep.”

“Our revels now are ended. These our actors,
As I foretold you, were all spirits and
Are melted into air, into thin air;
And, like the baseless fabric of this vision,
The cloud-capped towers, the gorgeous palaces,
The solemn temples, the great globe itself,
Yea, all which it inherit, shall dissolve,
And, like this insubstantial pageant faded,
Leave not a rack behind. We are such stuff
As dreams are made on, and our little life
Is rounded with a sleep”.

“I have bedimmed
The noontide sun, called forth the mutinous winds,
And ‘twixt the green sea and the azured vault
Set roaring war; to the dread rattling thunder
Have I given fire and rifted Jove’s stout oak
With his own bolt; the strong-based promontory
Have I made shake and by the spurs plucked up
The pine and cedar; graves at my command
Have waked their sleepers, oped, and let ’em forth
By my so potent art.”

“But this rough magic
I here abjure, and, when I have required
Some heavenly music, which even now I do,
To work mine end upon their senses that
This airy charm is for, I’ll break my staff,
Bury it certain fathoms in the earth,
And deeper than did ever plummet sound
I’ll drown my book.”

“Now my charms are all o’erthrown,
And what strength I have ‘s mine own”

“As you from crimes would pardoned be,
Let your indulgence set me free.”

And that’s our Prospero character analysis complete. What do you think of the character of Prospero? Let us know in the comments section below!