Puck is a character in Shakespeare’s play, A Midsummer Night’s Dream. His name is Robin Goodfellow but he’s known as Puck in the play. He is one of the fairies who inhabit the forest, and is the servant of the Fairy King, Oberon.

In Puck Shakespeare has included a character out of European folklore into the play – a mischievous fairy, not quite malicious, but annoying, who plays practical jokes on people without intending any harm. He is blamed for things like objects going missing, milk going sour, and so on, as a kind of scapegoat for those incidents. Sometimes he will be held responsible for a bit of good luck as well. He exists everywhere in European folklore, under different identities – for example, a ‘kobold’ in Germany, a ‘brownie’ in Scotland, and in England, a ‘hobgoblin.’ 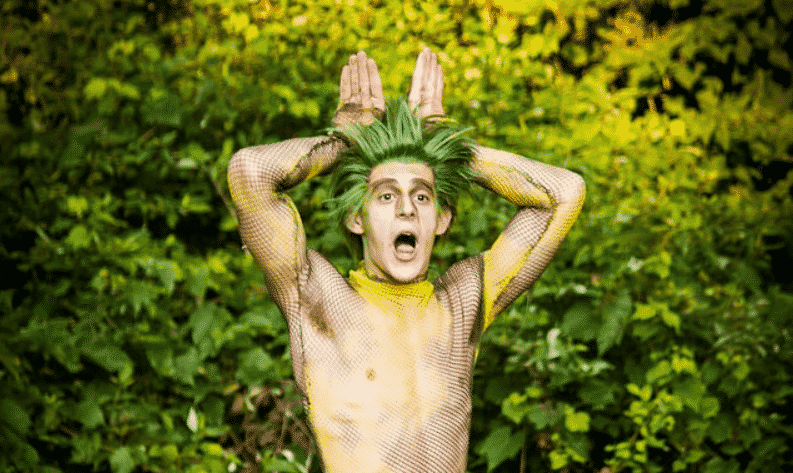 Nick Piacente as Puck character in A Midsummer Night’s Dream

When we first meet Puck in Act 2 Scene 1 he introduces himself in a conversation with another fairy, boasting about what a mischievous fellow he is, and what he does to people.

I am that merry wanderer of the night.
I jest to Oberon and make him smile
When I a fat and bean-fed horse beguile,
Neighing in likeness of a filly foal:
And sometime lurk I in a gossip’s bowl,
In very likeness of a roasted crab,
And when she drinks, against her lips I bob
And on her wither’d dewlap pour the ale.
The wisest aunt, telling the saddest tale,
Sometime for three-foot stool mistaketh me;
Then slip I from her bum, down topples she,
And ‘tailor’ cries, and falls into a cough;
And then the whole quire hold their hips and laugh,
And waxen in their mirth and neeze and swear
A merrier hour was never wasted there.

Puck is loyal to Oberon and will do anything the fairy king asks of him. At the moment the king and his queen, Titania, are in a dispute over an Indian child whom she has adopted. He wants to raise the child in his ways but Titania won’t give him up to him. Oberon instructs Puck to find a particular flower that has the magical quality of making whoever has its juice squeezed into their eyes fall in love with whatever creature they first see when they next open them. He is to squeeze it into Titania’s eyes while she is sleeping.

Puck does that and she wakes and first sees the narcissistic Bottom, who Puck has turned into an ass by placing an ass’s head on his shoulders, because of his ass-like behaviour. That produces some of the funniest scenes in all of Shakespeare’s plays. It is part of the sub-plot, however. The main action regarding the magic potion is about the four lovers wandering in the forest.

The story of the four lovers is complicated. Briefly, they have run away in pairs, with a love triangle at the centre of the story. Oberon instructs Puck to sort it out, using the love potion, but Puck makes a mistake and puts the potion in the wrong young man’s eyes, which leads to great confusion which, in turn, has to be sorted out, which Puck finally manages to do. In the meantime, while all that business goes on Puck, invisible to them, watches with amusement, commenting on the action, confusing them with comments of his own, imitating their voices, and laughing along with the audience.

At the end of the play Puck plays the role usually assigned to the stage manager. He makes a speech, addressing the audience directly. He suggests that anyone who might have been offended by the play’s events should, like the characters, consider that the whole performance was just a dream.

I’ll put a girdle round about the earth
In forty minutes. (act 2, scene 1)

Sometime a horse I’ll be, sometime a hound,
A hog, a headless bear, sometime a fire;
And neigh, and bark, and grunt, and roar, and burn,
Like horse, hound, hog, bear, fire, at every turn. (act 2, scene 1)

Jack shall have Jill;
Nought shall go ill;
The man shall have his mare again, and all shall be well. (act 4, scene 2)

If we shadows have offended,
Think but this, and all is mended,
That you have but slumber’d here
While these visions did appear. (act 5, scene 1)