You are here: Home1 / Shakespeare Characters2 / Sycorax, The Tempest

Sycorax is not a character we meet in Shakespeare’s The Tempest play. However, although already dead before the action of The Tempest begins, she is an unseen presence in the play and she casts a dark shadow over it. When Prospero arrives on the island he finds evidence of a previous occupant, a witch who practiced a malevolent magic and left a son, the deformed, barely human, Caliban. Prospero’s studies have given him the skills to practice magic himself and his earliest endeavours have been to release the spirit, Ariel, from the heavy oak tree in which Sycorax had embedded him, and to enslave Sycorax’s son and control him with his magic. There are several other spirits on the island, now embraced by Prospero, who has released them from the cruel conditions imposed on them by Sycorax.

Sycorax is thus an important part of the back story to the play. Another important aspect is Prospero’s back story. He was usurped as Duke of Milan and, instead of being executed, he was taken pity on by a friendly courtier, placed in a boat with his baby daughter, Miranda, and set adrift in the Mediterranean Sea, striking land on a remote island. Sycorax’s story runs parallel to that of Prospero’s, and Prospero’s fifteen years on the island runs parallel to Sycorax’s occupancy of it. Sycorax, while pregnant, was banished from Algiers to the Mediterranean island for practicing sorcery, in parallel with Prospero’s being usurped because of his immersion in his studies rather than in governing his state, and ending up on the island. Like Prospero, too, she was spared death. Instead, she was taken to the island by sailors and abandoned there. When her son was born she taught him to worship the demonic god, Setebos and showed him how to use the resources of the island. 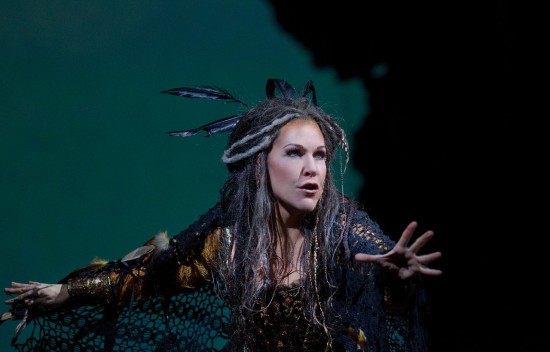 Sycorax’s unseen presence is an influential force in the play. Her memory defines some of the relationships. Her son, Caliban, claims ownership of the island and, with the help of shipwrecked members of the royal party, Stephano and Trinculo, attempts to overthrow Prospero. Also, in order to control the rebellious Ariel, Prospero constantly reminds him of the cruel treatment he had suffered at the hands of Sycorax and threatens to do the same to him. Here, too, the parallel is evident. Prospero is a mirror image of Sycorax, doing much the same things, but laterally reversed: he releases Ariel and tortures Caliban. The similarities between Prospero and Sycorax throw Prospero’s apparent goodness into ambiguity as his cruelty and dictatorial manner – his threats to Ariel and his treatment of Caliban – are underlined by that mirror effect.

In Act 1 Scene 2 Prospero tells Miranda, “for one thing she did /They [referring to the Algerians] would not take her life.” It is something that has fascinated scholars. There are basically two ideas about that. First, there is a story about Emperor Charles V’s invasion of Algiers in 1541 in which an unnamed witch predicts that the invading fleet will be wrecked before it can do any harm. She advises the city commander not to surrender. He takes her advice and Algiers does not fall. Shakespeare would have heard about that. The other idea is that she avoided execution by getting pregnant – a common practice among female thieves in Elizabethan England, where pregnant women were sometimes spared execution.