Titania is a character in Shakespeare’s play, A Midsumer Night’s Dream. She is the Queen of the fairies – the wife of the Fairy King, Oberon.

Titania is one of the characters in the play, like Puck, that are taken from traditional folklore.  The fairy queen doesn’t have a name in folklore: Shakespeare took the name from Ovid’s Metamorphoses  in which the daughters of  Titans are known as ‘Titanias.’

In A Midsummer Night’s Dream, Titania is part of one of the play’s subplots. In that story, she has a dispute with Oberon and he punishes her by using a potion that makes her fall in love with the first creature she lays eyes on when she awakens. She wakes up and sees Bottom, who has been turned into an ass by Puck because he has been behaving like an ass. That leads to a great deal of comic content, after which the matter is resolved with the spell broken, Bottom being returned to his former condition, and Titania horrified by what has happened to her. 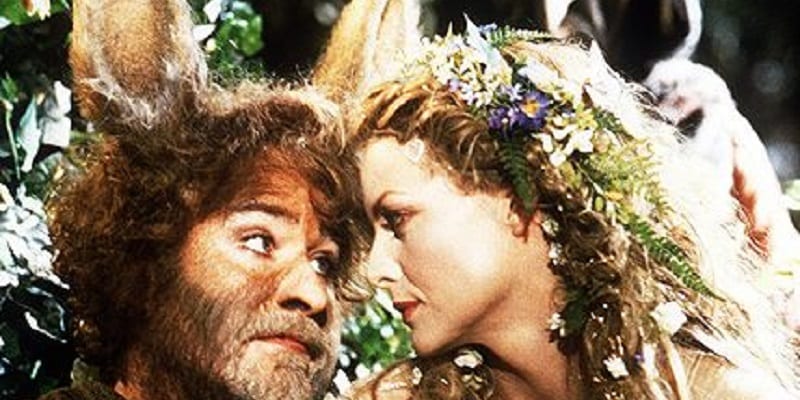 Michele Pfifer (right!) as Titania in A Midsummer Night’s Dream (1999)

Although her role is relatively small, Titania is a highly memorable character. She is one of Shakespeare’s strongest and most feisty women characters. Although she’s gracious and physically delicate she stands up forcefully to her very powerful husband, refusing to hand over the Indian boy she has adopted, in the face of his strenuous efforts to make her do so. She tells him in robust language and in no uncertain terms to back off.

The play is filled with incidences of women being oppressed by the actions of the powerful men who control them. There is a sense of disappointment that although Titania is able to stand up to Oberon, after she has been released from the spell and knows the source of her cruel treatment, she does not make any comebacks against Oberon.

The trick is particularly cruel because the potion has turned her from a strong, independent woman into a lovesick girl, completely subject to a man – a man who has no good qualities, literally a donkey, and devoid of any ability to make sensible judgments. This is a highly theatrical and ironic demonstration of one of the most dominant themes in Shakespeare’s plays – the oppression of women by powerful men, ironic because she is subservient to a man who is no more than an ass, as so many of the powerful men in Shakespeare are.

Titania’s marriage to Oberon is a version of an open relationship – an interesting thing in a play written more than four hundred years ago. Both partners enjoy consensual extra-marital episodes. One could, therefore, call Titania a forerunner of the figures who produced the feminist movement with its sexual liberation. She is also well before her time in being something of an eco-warrior in that she worries about her quarrel with Oberon having adverse consequences for the environment: she feels that as they are the leading spirits of the natural world their quarrel will upset the harmony and order of nature and bring about some unpleasant environmental conditions.

If you will patiently dance in our round
And see our moonlight revels, go with us. (act 2, scene 1)

What angel wakes me from my flowery bed? (act 3, scene 1)

Come, sit thee down upon this flowery bed,
While I thy amiable cheeks do coy,
And stick musk-roses in thy sleek smooth head,
And kiss thy fair large ears, my gentle joy. (act 4, scene 1)

what visions have I seen!
Methought I was enamour’d of an ass. (act 4, scene 1)

Hand in hand, with fairy grace,
Will we sing, and bless this place. (act 5, scene 1)