Want to understand more about who Yorick was in Hamlet, and his significance to the play? Read our primer below.

You will quite often come across a poster, or a picture in a book, of a young man, dressed in black, looking at a skull, which he holds up in front of his eyes. You can bet that it’s either a notice for a performance of Hamlet somewhere nearby or that you have landed on the book’s chapter about Hamlet.

It is one of the most recognisable images in modern civilization. The young man could be wearing a suit in the fashion of any of the past four centuries but it will always be black. It is Prince Hamlet, dressed in mourning for his recently deceased father.

There is usually a line that goes with the image. It is a piece of dialogue, and very simple: “Alas, poor Yorick.” It is one of the most quoted phrases in all of Shakespeare, a phrase that often springs to mind when one comes across the word ‘Hamlet.’

Is Yorick a character in Hamlet?

Yes and no. Yorick is not a character with any lines as he is represented by a skull, and is discussed only as a memory.

But he was once an interesting man – even exciting, glorying in a lively personality, having been the king’s jester, but dead now for a few decades.

The point of Yorick is that his skull is the focal point of several of the themes in Hamlet – death, decay, corruption  – many of the things the play is concerned with, the things that preoccupy Hamlet’s mind. However, Shakespeare presents it as a graphic moment in the middle of a scene filled with humour as the gravediggers joke about their job.

Hamlet and his friend Horatio, passing through a churchyard, encounter two gravediggers, clearing out a grave for the burial of Ophelia. They are unearthing bones of people previously buried there.

Hamlet picks up one of the skulls and the gravediggers tell him that it’s the remains of Yorick who, as it turns out, was someone Hamlet knew as a child. When Hamlet hears whose skull it is he examines it closely then turns to his friend and describes Yorick:

“Alas, poor Yorick! I knew him, Horatio: a fellow
of infinite jest, of most excellent fancy: he hath
borne me on his back a thousand times; and now, how
abhorred in my imagination it is! my gorge rims at
it. Here hung those lips that I have kissed I know
not how oft. Where be your gibes now? your
gambols? your songs? your flashes of merriment,
that were wont to set the table on a roar? Not one
now, to mock your own grinning? quite chap-fallen?
Now get you to my lady’s chamber, and tell her, let
her paint an inch thick, to this favour she must
come; make her laugh at that.” 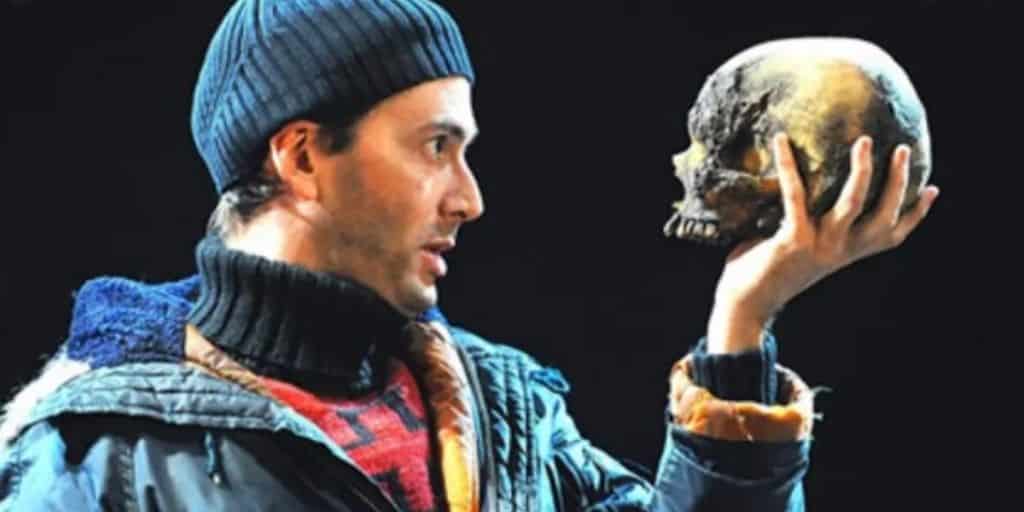 And so, if we want to know about the late Yorick himself, there he is as Hamlet remembers him – giving the children of the court piggybacks; a very imaginative and intelligent jester; an affectionate man. He was a political commentator, a singer, and an effective joke-teller.

However, the passage is full of the grim reminders of death. Yorick is more alive than most people but we see his laughter turned to the grin of a skull, his lips gone.

As the actor playing Hamlet describes his erstwhile playmate the audiences would have responded with cheering and whistling as they recognised it as a tribute to Richard Tarlton, a star of the pre-Shakespearan stage, whom most remembered as a brilliant comic actor.

The Relevance of Yorick in Hamlet

But Yorick’s personal qualities could not matter less. The passage is not at all about that, except, perhaps, to throw a titbit to Tarlton’s fans. His importance is that he is dead but was once alive, because the scene is a comment on the futility of life. In the end, all lives come down to a lonely skull in a graveyard. Women, vainly plastering their faces with makeup – their falseness evident in their placing of a high value on their appearance – all end up like this skull buried in soil. Men selling their souls for power and money, all end up like this.

Even the most powerful men who ever lived – Caesar and Alexander – have passed through the stage of being skeletons and have eventually returned to the earth and become part of the clay. After all their glory and importance all they are now is the material for making a stopper for a wine keg.

The audience would also immediately have grasped the real meaning of the scene. They were used to the tradition of momento mori (remember you shall die), presented as human skulls in 16th and 17th century paintings throughout Europe. Mary Magdalene was often depicted holding a skull. However, this image, presented by Shakespeare in the form of a poetic eulogy to Yorick and taken up by artists and illustrators, is the enduring one, and the one that has best survived as the predominant among the momento mori theme in the culture.