Ernest Hemingway was a novelist, short story writer, and journalist. He published seven novels, six short story collections, and two non-fiction works, and won the Nobel Prize for Literature in 1954. More works, including three novels, four short story collections, and three non-fiction works, were published posthumously. Several of his works are now classics of American literature. In 1961, like his father, a brother and a sister, Hemingway committed suicide. A niece, Margaux Hemingway, the Holywood star, also committed suicide.

What places Hemingway among the twenty top American writers is the style he developed, that set the benchmark for 20th century prose writing in the whole of the English speaking world. He changed the nature of American writing by reacting against the elaborate style of 19th century writers and by creating a style, in the words of literary critic, Henry Louis Gates, of Harvard, ‘in which meaning is established through dialogue, through action, and silences—a fiction in which nothing crucial—or at least very little—is stated explicitly.’

When Hemingway was awarded the Nobel Prize, the citation commented that it was for his ‘mastery of the art of narrative, most recently demonstrated in The Old Man and the Sea, and for the influence that he has exerted on contemporary style.’ His first novel, The Sun Also Rises is written in the minimal, lean, muscular, stripped-down prose for which he became famous and which influenced the writers who came after him. 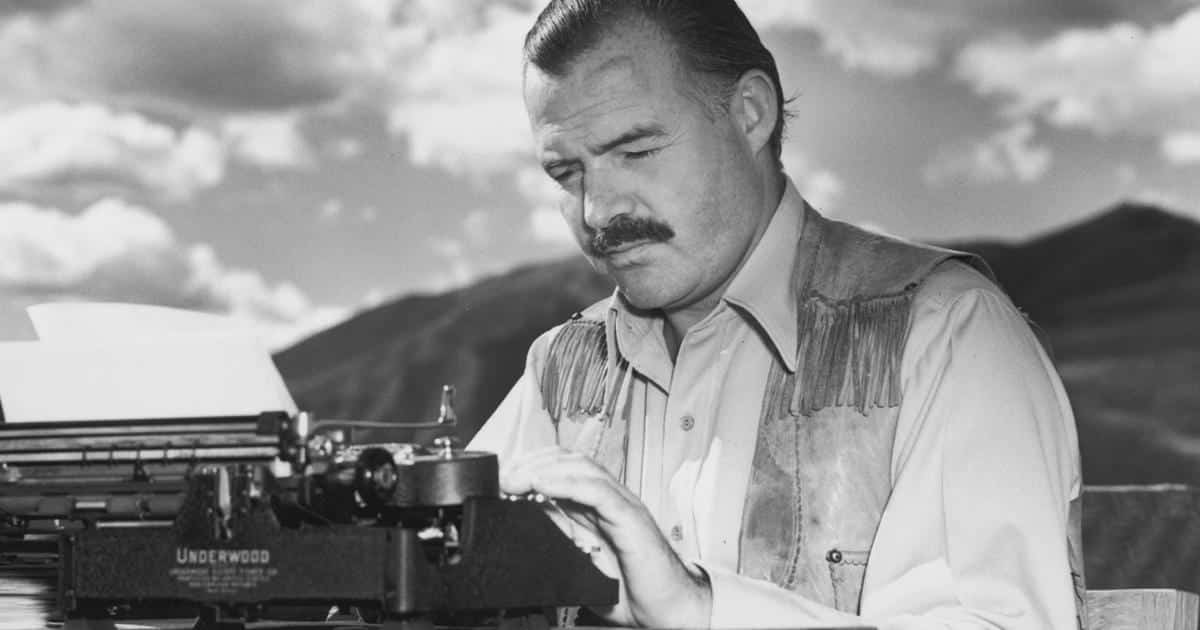 Perhaps most famous for his war novel, For Whom the Bell Tolls, he began his fiction writing with short stories, in which he taught himself how to edit his prose, stripping it to the bone and creating a greater intensity by the omission rather than the inclusion of detail. The result is to create significant connections and meaning beneath the surface of a sparse, apparently simple, almost monosyllabic narrative, using the simple sentences that a child might use. He also employs cinematic techniques such as cutting quickly from one scene to the next and of splicing one scene into another. Intentional scene omissions allow the reader to fill in the gap, creating for herself a three dimensional prose. As a result of that example it became almost impossible for 20th Century fiction writers to revert to the kind of prose that preceded Hemingway’s.

It wasn’t just writers and critics that showed enthusiasm for Hemingway’s works: he had a huge following among general fiction readers. His universal themes of love, death, war and loss permeate his writings in the same way that they did that of Shakespeare  and many other great writers, as well as being recurring themes in American literature.  The critic, Susan Beegel, in spite of an objection to what she sees as an anti-semitic, homophobic thread in his works, sums it up thus: ‘Throughout his remarkable body of fiction, he tells the truth about human fear, guilt, betrayal, violence, cruelty, drunkenness, hunger, greed, apathy, ecstasy, tenderness, love and lust.’

The extent of Hemingway’s presence in the popular culture is testament to his significance as a 20th century literary figure. There are several bars named ‘Harry’s Bar’ around the world, in recognition of the bar in the novel Across the River and Into the Trees. There are also many restaurant’s called ‘Hemingway’s.’ A line of furniture includes ‘the Kilimanjaro bedside table’ and a ‘Catherine’ sofa; a line of Hemingway safari clothes has been created and there is an expensive Hemingway fountain pen. His  novels have been made into films, sometimes more than once, and several short stories have been adapted for film and television.