You are here: Home1 / English Literature2 / Famous Authors: The 30 Greatest Writers Of All Time3 / Emily Dickinson: A Biography

Unknown as a poet during her lifetime, Emily Dickinson is now regarded by many as one of the most powerful voices of American culture. Her poetry has inspired many other writers, including the Brontes. In 1994 the critic, Harold Bloom, listed her among the twenty-six central writers of Western civilisation.

After she died her sister found the almost two thousand poems the poet had written. As her poems entered the public consciousness her reception concentrated on her eccentric, reclusive nature, but since then she has become acknowledged as an original and powerful poet. It is fortunate that her sister gained access to the poems as without them American culture would have been very much poorer.

Emily Dickinson challenged the existing definitions of poetry and what the work of a poet is. She experimented with language with the aim of freeing it from conventional restraints. She created a new type of persona for the first person narrator: the speakers in Dickinson’s poetry are observers who see the inescapable limitations of their societies as well as their imagined and imaginable escape from that. To make the abstract concrete and to define meaning without constraining it she created a distinctive language for expressing what was not yet realized but possible. In her view while poetry liberated the individual, it also left her ungrounded. When the first volume of her poetry was published in 1890, four years after her death, it met with remarkable success. Going through eleven editions in less than two years, the poems soon extended far beyond their first audiences to an international one. Indeed, both her poems and her many letters include many well known quoate and phrases – read more here about popular Emily Dickinson quotes. 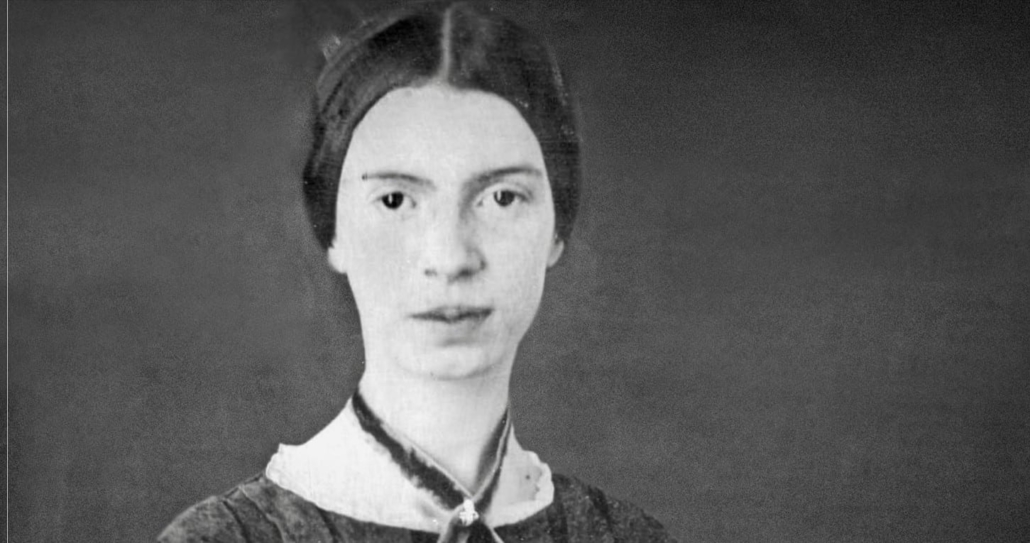 Emily Dickinson’s poems are taught in the United States in classes ranging from middle school to post graduate courses in universities and colleges. The poems appear widely in poetry anthologies and have been use as texts and lyrics by several internationally renowned composers like John Adams, Michael Tilson Thomas, Nick Peros and Aaron Copland. There are several schools named after her. Some literary journals have been set up exclusively to examine her poems, notably The Emily Dickinson Journal. The United States Postal Service issued a commemorative stamp in her honour in 1971.

Emily Dickinson’s most famous poem is Because I could not stop for Death:

Because I could not stop for Death –

He kindly stopped for me –

The Carriage held but just Ourselves –

We slowly drove – He knew no haste

And I had put away

My labor and my leisure too,

We passed the School, where Children strove

We passed the Fields of Gazing Grain –

We passed the Setting Sun –

The Dews drew quivering and Chill –

For only Gossamer, my Gown –

My Tippet – only Tulle –

We paused before a House that seemed

A Swelling of the Ground –

The Roof was scarcely visible –

The Cornice – in the Ground –

Since then – ’tis Centuries – and yet

Feels shorter than the Day

I first surmised the Horses’ Heads

Interested in Emily Dickinson? If so you can get some additional free information by visiting our friends over at PoemAnalysis to read their analysis of Dickenson’s poetic works.