Allusion is a frequently used literary device. Allusion means ‘to allude,’ which simply means ‘to refer’ to something. In literature, it’s found when a writer refers to another piece of work or refers to an earlier part of their current work.

The history of allusion in literature

Great works of literature rarely stand on their own or come from nowhere. The more a literary text embraces something previously written, the deeper and more profound it is likely to be.

The way poets embrace other works or incorporate them into their own poetry is through the literary device of “allusion.” Allusion means ‘to allude,’ which simply means ‘to refer’ to something, but the literary term is ‘allusion.’

There are many ways that writers use allusion, from direct quotation to oblique references that are no more than hints. An allusion is an idea that may be taken from mythology, other literary texts, history, or even everyday life. In alluding to some event or story the poet can bring the whole idea of that story into her own poem, sometimes with only a glancing reference. In Portrait of a Lady TS Eliot describes a man visiting a woman with whom he has been having a relationship but now wants to end it. He goes into her room, describing it as having “an atmosphere of Juliet’s tomb.” The phrase brings into the reader’s mind all the tragic tones of this charnel house where Juliet is lying in a state of death-in-life with rotting corpses all around her.

Allusion is a powerful device. A writer can, by using a minimum of words, bring a world of associations into her own work, as in the example above. Another example is Herman Melville naming the whaler in Moby Dick, the Pequod. He is alluding to the Native American tribe, the Pequot. That would immediately make his 19th century American readers think about the Pequot tribe having been effectively wiped out in the Pequot War of 1636, something that is foreboding right from the beginning of the novel and, indeed, the whale eventually wipes out the whaling fleet, including the Pequod, leaving the narrator as the sole survivor.

By referring to something with the word “titanic,” we know exactly what that is implying as the whole story of the Titanic, a ship destined to be wrecked, is brought into our minds.

Writers have found the classics a rich source of reference. For example, referring to a fatal weakness in a powerful person a writer may call it an “Achilles heel.” By alluding to that mythological story (and at the same time alluding to another poet’s work – Homer) the poet has condensed the language of her poem. She has brought the whole story of Achilles having been dipped in the River Styx as a baby to make him invincible into her poem in just two words. By his mother’s holding the baby Achilles by his heel and not dipping it in the river with the rest of his body when, by doing so,it made him invincible, his heel remained a vulnerable part of his body and, indeed, proved fatal, The writer wants you to have that in mind as you read her story. Given a warning that exploring some difficult issue would open a Pandora’s box is an allusion to a mythological story where Pandora ignores a warning not to open a box but can’t resist it and opens it, only to be confronted with a lot of unpredictable, dangerous and uncontrollable things which she has released and which can’t be returned to the box.

Allusion can be complex. It often goes well beyond simple quotation. An example of that is a passage in T.S. Eliot’s poem The Waste Land. He describes a prostitute sitting in her boudoir, ready to entertain a man. At first glance the passage looks like Enobarbus’ description of Cleopatra in Shakespeare’s Antony and Cleopatra.  Eliot makes it look like the Shakespeare passage, imitating Shakespeare’s blank verse and iambic pentameter. However, Cleopatra, sitting in her barge, and the prostitute sitting in her boudoir, are two entirely different women. Cleopatra is described in terms of precious metals like gold and silver, rich jewels, expensive perfumes and delicate winds. It is a picture of a beauty that’s immortal. Eliot’s prostitute also has decorative surroundings but Cleopatra’s surroundings are translated into coloured glass and cheap perfumes that can be picked up in a street market, their smell attempting to mask the foul smell of the room.

The use of that allusion goes right to the heart of the poem’s meaning, which is about the moral decline of Western culture. The purity of the Egyptian age has been replaced by the cheapness of the 20th Century life in Western Europe that Eliot is depicting in his poem.

Throughout literary history writers have alluded to words, stories and characters in the Bible to create new associations in the readers’ minds. Some of the favourites are the good Samaritan, Jonah, the character who was swallowed by a fish, Solomon, the highest standard of wisdom, and a Garden of Eden that takes one to a natural paradise.

There is never anything entirely new in literature. Without the intertextuality of allusion, that creates depth, it would be somewhat parochial, which is a characteristic of a work that does not stand on the shoulders of what has gone before by using the literary device of allusion. 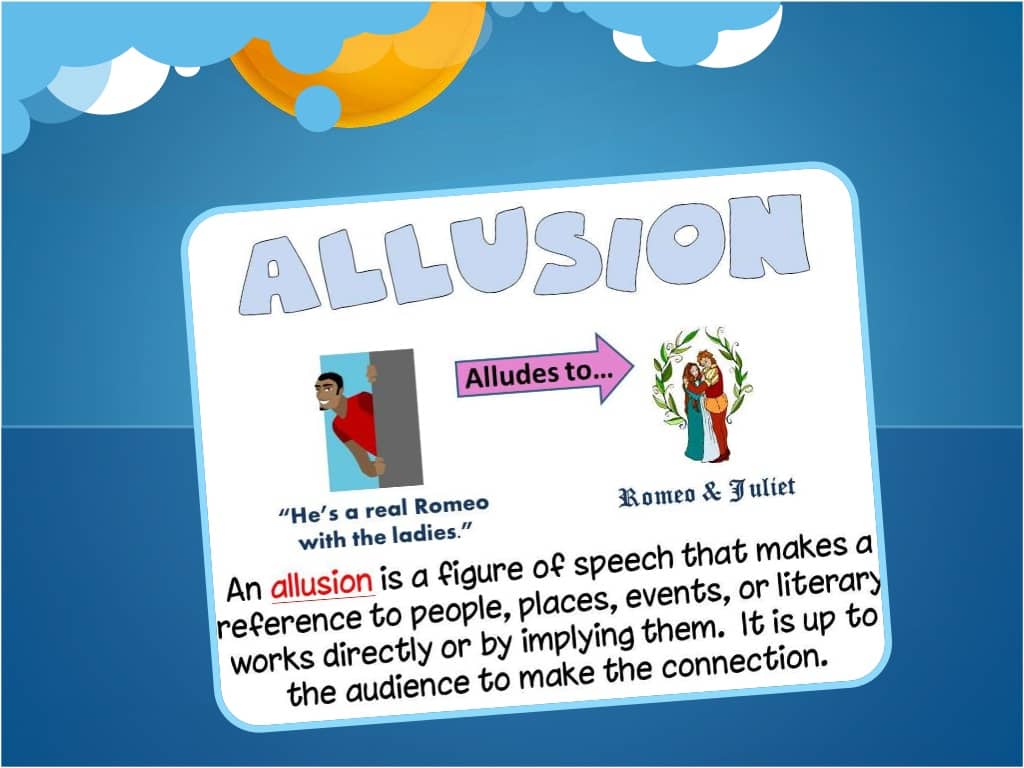 An example of literary allusion