Dramatic irony is a device that was commonly used in Greek tragedy, by which the audience is struck by the significance of a character’s actions or words in a situation they know about but which the characters do not. For example, a character in a film telling her parents that she knows she has got the job for which she has been interviewed when the audience knows that a letter is on the way informing her that she has been declined for the job.

How is dramatic irony different to other types of irony?

Verbal irony is a common type of irony, where a person uses language that states the opposite of what they mean to say. For example, if something goes disastrously and the assessment is, ‘Well that went well,’ that is verbal irony. Or if a student arrives late for a morning lecture and the lecturer greets them with ‘good afternoon.’ that is ironic (and sarcastic, as the lecturer’s motive is to be a little mean to the student). This compares with dramatic irony where the reader knows something that the character does not. Unlike dramatic irony, verbal irony can only be communicated by tone.

Situational irony is another common plot device, whereby the outcome of a series of actions ends up being very different than expected. Typically this would mean a paradoxical or perverse outcome, rather than simply a surprising or interesting one. The climax of Romeo and Juliet is an example of situational irony overlapping with dramatic irony – situational irony in that Romeo drinks poison to join Juliet in death, but actually abandons Juliet in life as she is not really dead. The dramatic irony overlap comes from the fact that the viewer knows that Juliet is not really dead as they watch Romeo drink the poison.

Dramatic irony gives the audience information ahead of one or more characters, to build in a level of suspense, and in many cases, things turn out OK in the end. With tragic irony things most definitely do not turn out OK. Tragic irony is a type of dramatic irony with a very bad ending – such as Romeo and Juliet where the pair of lovers both end up dead through a series of missteps, many of which the audience is aware of before the protagonists.

How is dramatic irony used in literature?

Is irony dramatic? It certainly can be – in fact, dramatic irony is one of the most effective items in a dramatist’s toolbox. It is commonly found in films, novels and plays, particularly in tragedies and comedies to create suspense or enhance the emotional appeal of a story.

Authors use the device to create unusual meanings in the speeches of the characters. A situation in which the audience knows about causes and conflicts before the main characters do is a useful plot device. Writers use dramatic irony as a tool to create and sustain the audience’s interest. It generates curiosity. It also creates tension in that the audience is encouraged to fear the moment when characters learn the truth that the viewer already knows and how he or she will deal with it. 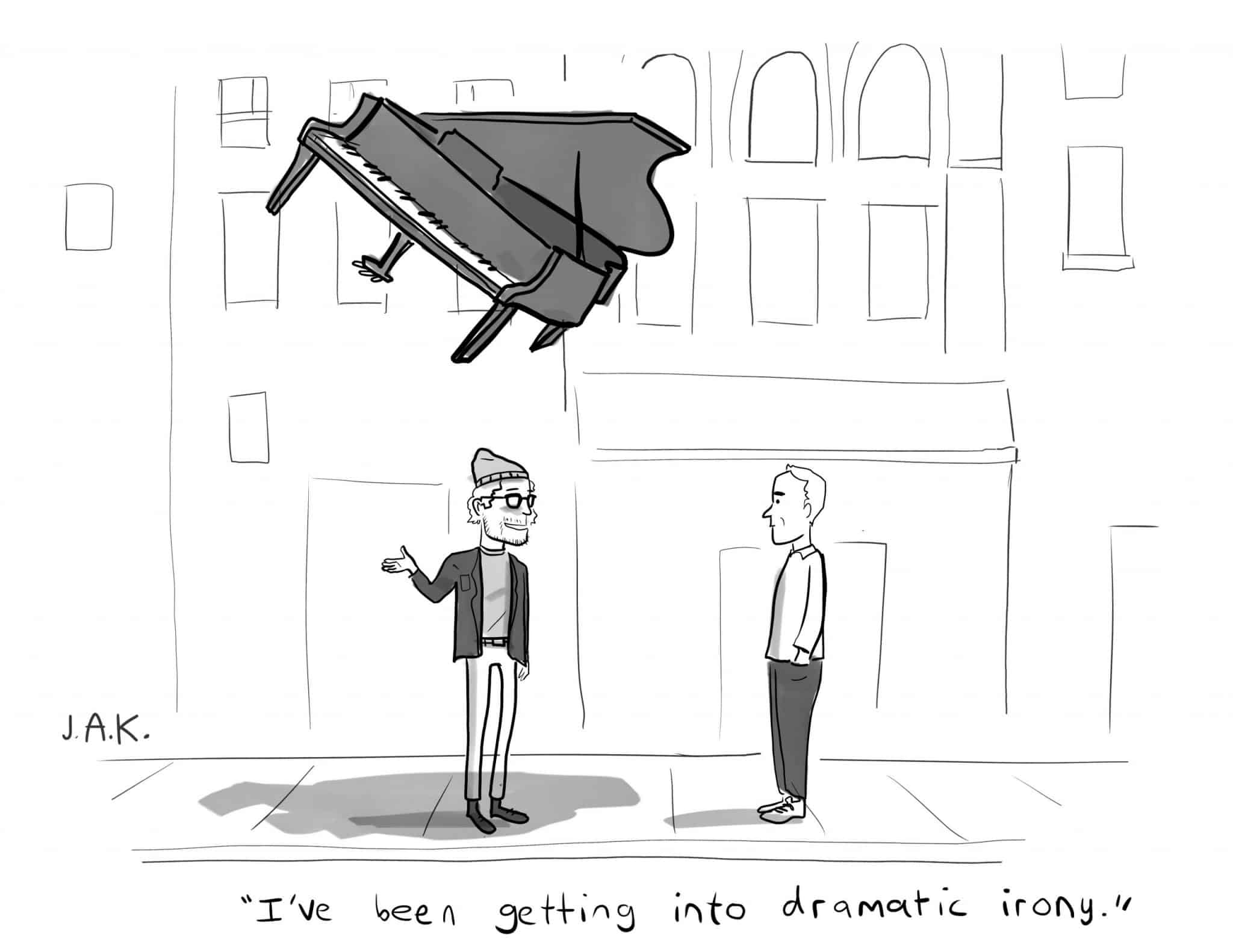 A wonderful take on dramatic irony from Jason Katzenstein

How did Shakespeare use dramatic irony?

Therer are many examples of dramatic irony in Shakespeare’s play – here are a couple:

In Othello, Iago hates Othello and is plotting to bring him down. Othello does not know that but the audience is well aware of it. Othello trusts Iago and has faith in him, believing him to be an honest man, while Iago is manipulating him. Iago tells Othello that his wife, Desdemona, is being unfaithful to him. He has gained the complete confidence of Othello and Othello says:

“I know thou’rt full of love and honesty
And weigh’st thy words before thou giv’st them breath.”

The audience is holding its breath because they know Desdemona is innocent and they are fearful of the consequences of Othello’s believing Iago.

One of the finest examples of dramatic irony occurs in Shakespeare’s in Macbeth. Macbeth has encountered three witches who tell him that he will be king someday. He believes them because they have told him other things that are, in fact, true. When he arrives at the king’s court he is already thinking that he will have to kill the king. The king, Duncan, regards Macbeth as his most loyal supporter and trusts him completely. After all, Macbeth has just been fighting valiantly for him, disregarding the danger to himself. Commenting on another thane who has proved to be a traitor, Duncan, while embracing Macbeth, says:

“There’s no art
To find the mind’s construction in the face;
He was a gentleman on whom I built
An absolute trust.”

He doesn’t know what’s in Macbeth’s mind but the audience does, and as he expresses disappointment in someone he has trusted, the audience knows that he’s not long for this life – at the hands of his most loyal captain, someone he trusts even more. Duncan has no idea of that by just looking at him. And the audience is thrilled by it. It’s a beautiful example of dramatic irony.

There’s Something About Mary (Jonathan Richman)

Jonathan Richman’s classic comedy, There’s Something About Mary, contains a number of dramatic irony examples. One of these is when Ted believes he has been arrested for picking up a hitchhiker, whereas the audience is aware that the police are actually questioning him about a murder. When Ted delivers the lines “I’ve done it several times before, it’s no big deal” it is the dramatic irony that is driving the comedy.

Fairy tales are full of dramatic irony examples. In the famous fairy tale Snow White and the Seven Dwarves, the audience is well aware that the old woman offering an apple to Snow White is in fact the wicked queen who wants to kill her. Snow White, of course, does not know this, takes the apple, has a bite, and falls down – seemingly dead.

Why is dramatic irony used?

Foreshadowing is not the same as dramatic irony, rather a device that can create dramatic irony in a book or play. Foreshadowing is a device whereby a writer gives a hint of what is to come later in the story, often letting the audience in on a secret that the characters don’t know, to create a sense of suspense.

What is irony often confused with?

Irony is potentially the most abused word in the English language, as these examples show: The word ironic is often misused to remark on a coincidence (“Isn’t it ironic we both turned up in the same tshirt!“), describe something unusual (“It’s December and yet it’s such a lovely day – how ironic!“), or to emphasize something interesting (“Ironically, it’s the best thing I’ve watched this year!“).

When used correctly, verbal irony is often confused by the listener (not the speaker) with sarcasm.