The Adventures Of Huckleberry Finn: An Overview

You are here: Home1 / English Literature2 / The 20 Most Influential Works of Fiction3 / The Adventures Of Huckleberry Finn: An Overview

The Adventures of Huckleberry Finn is an American novel by Mark Twain (Samuel Clemens), first published in 1885. It is notable for its prose, written entirely in vernacular English with rich regional colouring, painting a vivid picture of the 19th Century American South. It is often referred to as the ‘Great American Novel’ because of the theme that addresses the big concern of America and also because it employs the language of the ordinary inhabitants of the South. It is narrated in the first person by a teenage boy, Huck, who runs away from an abusive father and embarks on a great adventure on a raft on the Mississippi River, during which he encounters a host of characters. The several episodes in the adventure are presented in a picaresque structure as Huck moves on down the river, meeting new people as he goes.

The comical characters and events provide an entertaining read but that masks the seriousness of the novel which is, above all, a biting satire on the entrenched attitudes of southern Americans, particularly their attitudes to race, which was a deep flaw in American history, leaving a scar that has not yet healed. 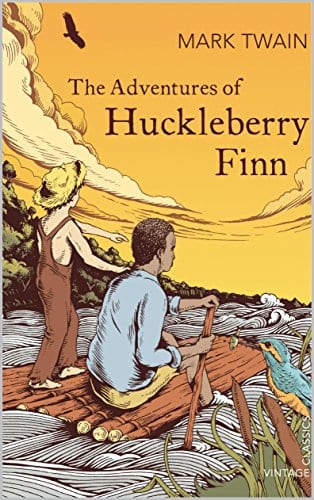 It has always been, and still is, one of the most controversial Western novels. It was generally criticised on its publication because of its extensive use of vulgar language and then, throughout the 20th Century and up to the present time, for its treatment of race. The theme of race has been misrepresented by those critics, even to the point of attempts to ban the novel from school curricula and to produce editions that take out the “n” word because of the extensive use of the word. The misrepresentation of the race theme leads some to condemn the novel – and Mark Twain – as racist, but that loses sight of the context and, in fact, the novel is, in part, a powerful attack on racist attitudes. It exposes prejudice by creating Huck as a parallel to the runaway slave, Jim. Tired of being beaten and disrespected, Jim runs away, and prejudiced readers would condemn him for that but the white Huck has done exactly the same thing and is regarded with sympathy by those who would condemn Jim.

Central to the story is Huck’s moral conflict with the values he has received from the society in which he has been growing up. He doesn’t have the education that would allow him consciously to reject those values but he makes a moral choice on the basis of the insights he gets into his friendship with the runaway slave, Jim. In Huck’s society slaves have no worth but Huck comes to appreciate Jim’s worth as a human being, in direct opposition to the things he has been taught. He understands that the escape both he and Jim have made from their oppression are the same, but while his own escape is regarded as the right thing to do in the circumstances, Jim’s action is regarded, not only as illegal, but immoral and, whereas he doesn’t have to hide from encounters along the river, Jim has to be hidden or disguised. Although he can’t articulate it he understands that there is a great hypocrisy in that. One of the characters he meets, Mrs Judith Loftus, shows sympathy for him as what she takes to be a runaway apprentice but boasts about her husband sending the dogs out to hunt down the runaway slave. In this way the novel explores the themes of race and identity, linking them as they apply to the American South. The main protagonist, Huckleberry,  personifies the interrelatedness between white and black culture in the United States.

The Adventures of Huckleberry Finn stands beside the world’s great works of fiction and presents, in laugh-out-loud prose, the great idea that the other books do in an often less readable way – that personal values can overcome injustice. It is as simple as that. Ernest Hemingway wrote about the novel: ‘All modern American fiction comes from one book by Mark Twain called Huckleberry Finn. It’s the best book we’ve had. All American writing comes from that. There was nothing before. There has been nothing as good since.’ And it’s not just this book that Mark Twain is famous for, but also his huge range of quotes on love and life from his many journalistic works.