The Epic of Gilgamesh: An Overview

You are here: Home1 / English Literature2 / The 20 Most Influential Works of Fiction3 / The Epic of Gilgamesh: An Overview

The Epic of Gilgamesh is an ancient Mesopotamian epic poem dating from about 2100 BCE. It is thought to be the world’s earliest great work of literature: it is certainly the oldest surviving such work. Scholars have worked out that it is derived from five Sumerian poems about Gilgamesh, king of Uruk. The poems evolved into the epic poem. Only a few tablets of it have survived but scholars have reconstructed most of the writing of the twelve tablets.

The poem is in two parts. The first part tells the story of a wild man, Enkidu, who the gods have created to stop Gilgamesh from oppressing the people of Uruk. He is presented with a prostitute, who civilises him, and he goes to Uruk where he challenges the king to a test of strength. He is defeated by Gilgamesh but the two nevertheless become friends. They go on a mission together to slay the Guardian, Humbaba the Terrible, where they cut down a sacred Cedar that he is guarding. After that, they kill the Bull of Heaven. Those actions anger the gods and they sentence Enkidu to death. 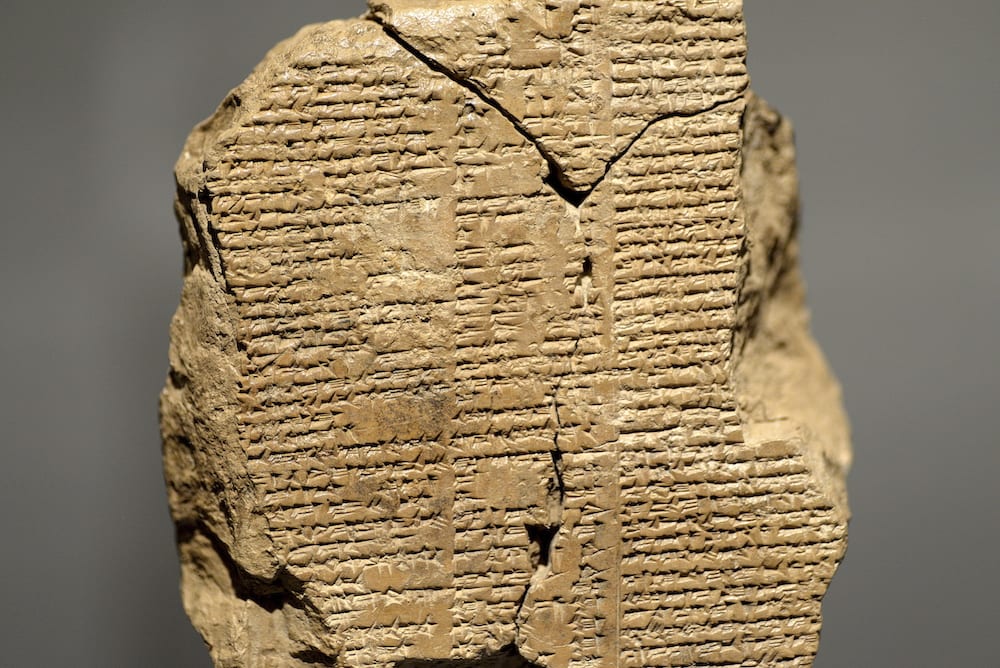 In the second half, Gilgameh is in mourning. He sets out on a dangerous journey to discover the secret of eternal life. What he learns is that he will never find it as when the gods created human beings they made death a part of being human: only they will make the decisions about when and how human beings will die. However, the great accomplishments of Gilgamesh bring him great fame and he lives on in that fame. So although he dies he achieves immortality through his great deeds.

The Epic has been enormously influential. Scholars agree that it is one of the foremost sources for the Old Testament. Most obvious is the Epic’s accounts of the Garden of Eden, the lyrics of Ecclesiastes and the great flood. In the Epic a god creates a man from the soil. He lives in a garden surrounded by animals. He is tempted by a woman who offers him food. He covers his nakedness and is banished from the garden forever. There is also a snake that plays a major role in the story. An unusual saying about the strength of a triple-stranded rope (a triple-stranded rope is not easily broken) in Ecclesiastes comes from the Epic. The flood narrative in Genesis is point-by-point almost identical to that in the Epic. There are several other parallels between the two books.

Gilgamesh’s journey has many of the stories that Homer drew on in The Odyssey and it’s clear that it was an important source for Homer. Like Homer’s epics, the Epic of Gilgamesh is a story about adventure but also a contemplation of some of the fundamental issues of the human condition.

The stories have inspired later, and modern and contemporary works of art, music and literature.