The Great Gatsby: An Overview

You are here: Home1 / English Literature2 / The 20 Most Influential Works of Fiction3 / The Great Gatsby: An Overview

The Great Gatsby, a novel by the American writer, F Scott Fitzgerald, is the story of Jay Gatsby, a young millionaire’s, obsession for a beautiful married woman, Daisy Buchanan. It is set on Long Island in the summer of 1922. Its themes are essentially American – the idealism, decadence, social change in the face of resistance to that, and the concept of the American Dream. It paints a vivid picture of its time, which has been called the Jazz Age. Although its initial reception was lukewarm it has since become regarded by many as ‘the great American novel’ in competition with the likes of Moby Dick by Herman Melville and The Adventures of Huckleberry Finn by Mark Twain for that title.

Nick Carraway, a young man from the Midwest comes to New York to work as a  bond broker on Wall Street and rents a cottage next door to the mansion of a mysterious young millionaire, Gatsby. He reunites with his wealthy cousin, Daisy, who lives with her philandering husband, Tom, in a large house across the bay from his cottage on the Long Island north coast. 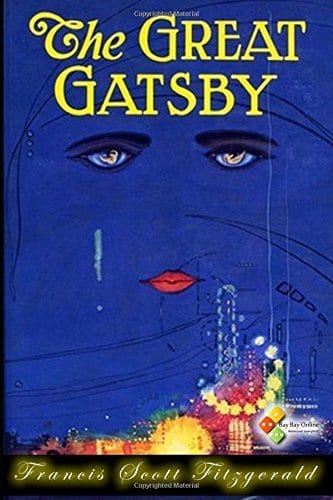 Gatsby befriends Nick because he was in love with Daisy when he was a poor young soldier and still is, and hopes that Nick will be able to help him make contact with her. He has since become fabulously rich and hopes that, since Daisy rejected him because he had no money, she will now accept him. Nick helps him and he and Daisy begin an affair. At the same time, her husband, Tom, also very wealthy, is having an affair with Myrtle Wilson, the wife of a small-time gas station owner.

The novel comes to a climax when a group consisting of Tom, Daisy, Gatsby, Nick and Daisy’s friend, Jordan Baker go off to spend a day in the city. A quarrel ensues between Gatsby and Tom and Daisy is forced to tell Tom that she loves Gatsby. They exchange cars and return in the two cars, Daisy going with Gatsby in Tom’s car. As Gatsby and Daisy pass the gas station Myrtle recognises Tom’s car and rushes out, runs into the car and is killed. No-one else knows that Daisy was driving and Gatsby nobly allows everyone to assume that it was he who was driving.

Wilson, knowing that it was Tom’s car that has killed his wife takes his gun and goes to the Buchanan house, where Daisy is with Tom. Tom tells Wilson that Gatsby was driving his car. Wilson goes to Gatsby’s mansion and shoots him then shoots himself.

That summary is the bare skeleton of the story and says nothing of the themes it explores. Central to the novel is the fact that Tom is part of the ‘old rich’ of the Midwest, whereas Gatsby is self-made, having risen from rags to riches after his move to the East. There are rumours that he has made his money in organised crime. The tension between the old and new rich was a major feature of the time. It was the tension of compelling social change versus the resistance to that change. That resistance makes a lie of the American Dream, the great American idea that a rise such as Gatsby’s, from the conditions of their birth, is nothing but a good thing, welcomed by all. The novel explores the realities of America’s myths of social and class mobility and exposes them as fraudulent. It also explores themes of the excesses of the rich, and the recklessness of youth. Societal gender expectations are another theme. Daisy, expected to play the role of the ‘beautiful little fool,’ comes out of that role of dutiful, faithful wife and makes choices that lead to tragedy. The Dream fails for both Gatsby and Daisy.

There are several specific reasons why The Great Gatsby is one of the most important fiction works.

Its portrait of an era is almost photographic – the flappers, the sex, the cars, celebrities, gangsters, a runaway stock market, all swirling around in illegal alcohol.

Although this series of influential fiction works more or less ignores the quality of the poetry or prose, apart from the prose and poetry of Shakespeare, which is an important part of The First Folio’s influence, Fitzgerald’s prose is a model for prose writers. Reading the novel is a pure joy, for that reason. From the inner thoughts of its narrator, Nick Carraway, to Gatsby’s parties and ordinary scenes like the reception room in Daisy’s house, the evocative beauty of Fitzgerald’s prose is a consistent force in the novel. There is not a moment of reader disengagement, not a flabby sentence or phrase. It is without doubt among the finest English prose ever written.