The Lord Of The Flies: An Overview

You are here: Home1 / English Literature2 / The 20 Most Influential Works of Fiction3 / The Lord Of The Flies: An Overview

William Golding’s Lord of the Flies is essential reading for everyone who lives in an organised, structured society, which is almost all of us. It is an exploration of how such societies are formed by individuals and how they are conducted, how they can succeed and how they may become dysfunctional. It’s deeply philosophical but written as an exciting adventure story, something that can even be enjoyed by children. We can read the theories of the same process in the works of Thomas Hobbes and Jean Jacques Rousseau but that would require enormous effort and concentration, whereas Lord of the Flies is a very easy read, presented as an exciting and gripping children’s adventure story, full of action and tension. It’s a wonderful novel whose influence lies in the clarity of its warnings of the dangers of ignoring its lessons.

During a nuclear war, a group of British boys are evacuated and their plane crashes in the shallow water just off a tropical island. There are no adult survivors and the boys, marooned on the island are left to organise themselves as best they can. They boys are strangers to each other, apart from a church choir, led by a boy called Jack. They hold an election to choose a leader and Ralph is elected. His aim is to organise the basic things they need for their survival – shelter, food and making and maintaining a fire to attract rescuers. Jack is given the job of hunting the wild pigs on the island and he employs his choir as fellow hunters. He is ambitious and jealous of Ralph as he wants to be in charge. A bitter rivalry develops between the two boys and the community becomes divided. Jack leads his hunters into a primal, savage mode while Ralph tries to keep the rest of the boys civilised. The hostility between the two groups grows and develops into a terrifying and violent climax. 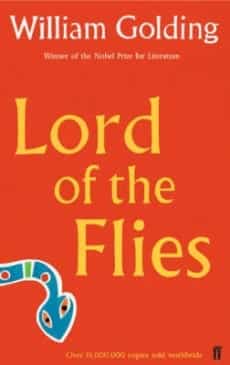 When the boys begin to understand their plight it becomes clear that they have to find a way of surviving. Conditioned by the grown-up society from which they have come they set about democratically electing a leader to make decisions. The leader, or ‘chief’, Ralph, identifies the roles and responsibilities needed and delegates them to the boys. He will explore the island and be responsible for building shelters while Jack, the other older boy, will hunt for food. There are some very young boys, not much older than toddlers, the ‘littleuns’, who are not given any responsibility other than to attend the meetings that Ralph will call. The theory of that arrangement is fine but depends on everyone playing his part successfully. Without that the system will fail. Ralph assumes that everyone will be motivated to make their society succeed.

Although Ralph knows nothing of Rousseau he holds the same view – that individuals will subjugate their self-interest to the interest of the group in order to survive. Rousseau also maintains that there should be assemblies of individuals who will vote, sometimes against their own interests, for the good of the group. That is Rousseau’s Social Contract. Ralph thinks that will happen but as time goes by that becomes less the case. The boys drift away from building shelters and maintaining the fire – two of the most vital tasks for survival. They allow the fire to go out and so when a ship passes by, they are unable to signal their presence on the island.

When there are sharp differences in viewpoint in a society it becomes divided and that is the origin of political parties. The failure of the fire brings a final split between Ralph and those who agree with him, and Jack and his choir. While Ralph is a thoughtful, practical leader with his sights on survival, Jack is opposed to any order other than regulating and disciplining his own subgroup, in a cruel and savage way, with no thought for the future or the consequences of abandoning the efforts at group survival. Ralph’s supporters begin to abandon him in favour of the lazier and exciting life that Jack offers and he ends up being isolated with only his two most loyal supporters following him and they find themselves being the targets of the other, larger, very violent group.

Jack’s followers are now savages: they are a ‘tribe’ who paint their faces, hunt and punish dissenters. Ralph’s small group are now identified as the enemy who have to be destroyed. The fun and games of playing war and hunting become the reality and Ralph is hunted down. Ralph’s supporters are murdered and at the point where Ralph is to be killed, they are rescued. The island has been set on fire and everything that has been built is destroyed. As they leave the island it is as though it has been struck by an atom bomb.