You are here: Home1 / English Literature2 / The 20 Most Influential Works of Fiction3 / Mahabarata: An Overview

The Mahabharata is the major Sanskrit epic of Ancient India. It is an epic narrative about the Kuruksetra War and the Kaurava and the Pandava princes. It is further noted for its philosophical and devotional material, including a discussion of the four goals of life. One of the principal stories is the Bhagavadgita, the story of Damayanti a princess of the Vidarbha Kingdom, who married king Nala of the Nishadha Kingdom. She also appears in other Hindu texts in numerous Indian languages.

The authorship of the Mahabharata is attributed to Vedas, a revered figure in Hindu tradition. He is considered to be immortal and, according to Hindu belief, still living. 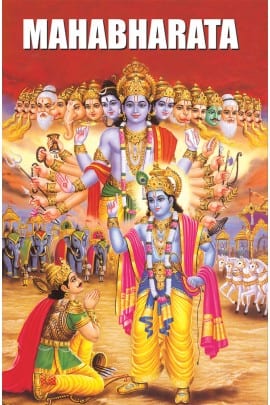 The Mahabharata is the longest ever epic poem known and generally considered as the longest poem ever written, containing about 1.8 million words. It’s about ten times the length of the Iliad n Oddysey put together. Its importance has been compared to that of the Bible, the works of Homer and Shakespeare and the Qur’an.

The themes of the Mahabharata offer one of the first instances of theorizing about the concept of a just war, something that has been debated in societies and cultures across the world up to the present time. One of five brothers in the story asks if the suffering caused by war can ever be justified. The long discussion between the siblings establishes criteria like proportionality, such s that chariots cannot attack cavalry, only other chariots; that there should be no attacks on people in distress;, no poisoned or barbed arrows; the principle of just cause (no attacking out of rage), and fair treatment of captives and the wounded, a major principle of the Geneva Convention.

The epic is still revered and constantly referred to and quoted today, not only because of its poetic and narrative beauty but, like the works of Shakespeare, its profoundly philosophical ideas have a lot to teach us about life, its mysteries and how to live it.

Some of the lessons we learn from the Mahabharata are:

A revengeful instinct can only lead to one’s own destruction. In this story, the Kauravas lost everything to their blinded desire to ruin the Pandavas.

Stand by what’s right; even fight for it. Arjuna is initially hesitant to wage war against his own blood. But Krishna reminds him that one has to stand by one’s duty, even it means going against one’s own family. Therefore, Arjuna has to go to war with them.

The eternal bond of friendship. The friendship between Krishna and Arjuna is central in this story. It is because of Krishna’s unconditional support that the Pandavas manage to survive the war.

Don’t be distracted by greed. Yudhishthir lost everything he possessed, from his kingdom to his wealth, because of his greed.

Never give up on life, even in the face of extreme obstacles. Karana battles his way through life, fighting discrimination and disgrace at every stage, but no obstacle could deter him from pursuing his goal. His devotion to his mother has no limits, to the extent that he even gives up his kavajkundal (life-saving power) for her.

Being a woman does not make you a lesser human being. This is the earliest expression of a feminism in world literature.Draupadi is manipulated into taking five husbands. She is humiliated by the Kauravas for the fault of one of her husbands. She is violated but she is bold enough to take a stand against her treatment. Her narrative reads like a modern story of feminine action.