You are here: Home1 / English Literature2 / The 20 Most Influential Works of Fiction3 / Metamorphoses: An Overview

The book has been, and still is, immensely influential and has influenced such major literary figures as Boccaccio, Chaucer, Dante and Shakespeare. Countless fairy tales employ the transformation concept with their many transformations such as frogs turning into princes, humble peasants transforming into kings, witches changing people into animals, and Ovid was the originator of the story of Midas, who turned everything he touched into gold. The Metamorphoses continues to be retold through several media – in film, drama, opera, art, sculpture and so on. 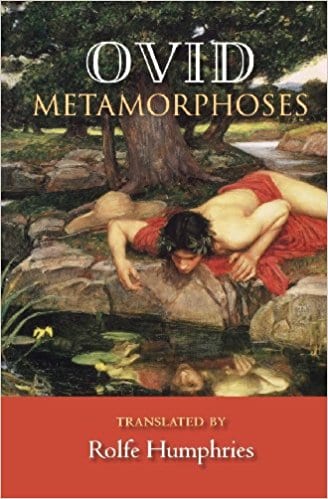 The transformation theme unifies the episodes of the book. Ovid declares right at the beginning what his book is going to be about. ‘I intend to speak of forms changed into new entities.’ A theme that runs beside that is violence which is frequently inflicted on a transformation victim. And because of the nature of the transformations, there is a thematic tension between nature and art that runs throughout the work. At times transformations are absurd, which creates a humorous thread that runs through the narrative. Other themes are love, power and artistry.

Western art and literature have been particularly influenced by The Metamorphoses. Although Ovid uses such sources as Homer and other Greek writers it is Ovid’s book that has exerted the greater influence.  Geoffrey Chaucer, in particular, made extensive use of Ovid. In The Canterbury Tales, The Manciple’s Tale and The Wife of Bath’s Tale rely heavily on episodes in The Metamorphoses.

Shakespeare took liberally from Ovid. The story of Pyramus and Thisbe that appears in the play-within-the-play in A Midsummer Night’s Dream is from Book IV of The Metamorphoses. The episode of Lavinia’s rape in Titus Andronicus is taken from Ovid’s story of Philomela’s rape by Tereus. Prospero’s speech in Act V of The Tempest is virtually copied from the speech by Medea in Book VII of The Metamorphoses. Milton drew on the book, as did Edmund Spenser, Dante and Boccaccio. In modern times, T.S. Eliot alluded extensively to episodes in his The Waste Land. Ted Hughes retold 24 of Ovid’s stories in his Tales from Ovid, which was in turn adapted by the Royal Shakespeare Company for the stage.

Many of Ovid’ stories have been the subject of paintings and sculptures in the last few centuries, including some of Titian’s best-known paintings and Bernini’s sculptures.