You are here: Home1 / English Literature2 / The 20 Most Influential Works of Fiction3 / Nineteen Eighty-Four: An Overview

Nineteen Eighty-Four is an English novel by George Orwell, published in 1949. It is a dystopian novel set 45 years later in Airstrip One, a country formerly known as Great Britain in what has become a province of a superstate, Oceana. Oceana is in a perpetual state of war. Its government subjects citizens to rigorous surveillance and state manipulation, conducted by the Inner Party, comprising a privileged elite. Individualism is ruthlessly suppressed and independent thinking is a crime policed by the Thought Police. Society is overseen by the Party leader, Big Brother, a cult figure who may or may not exist, and citizens are forced to worship him in regular praise sessions.

Nineteen Eighty-Four is far more than being just another science fiction, dystopian novel. Apart from being a very good read and the best of its genre, it has become a textbook for democratic societies of what they need to bear in mind as technology advances. It is a prophetic novel, and as each of its technological prophecies is realised we are warned, in the text of Nineteen Eighty-Four, of where it may lead if we are not vigilant. Our 21st Century world is characterised by security and surveillance cameras, interactive television, the interception of emails and other electronic communications, and other such developments. Moreover, the tendency of even elected leaders to attempt to take onto themselves powers that are not supported by democratic principles is something Orwell’s masterpiece predicts and warns against. The novel is therefore immensely influential and it can be argued that its lessons have played a part in the regulation of the tendencies of western leaders to be careless about the rights of individuals. For anyone to be subjected to the kind of life depicted in the novel would be true horror and when governments begin to go too far on something the vigilant free media begin to quote from Nineteen Eighty-Four. 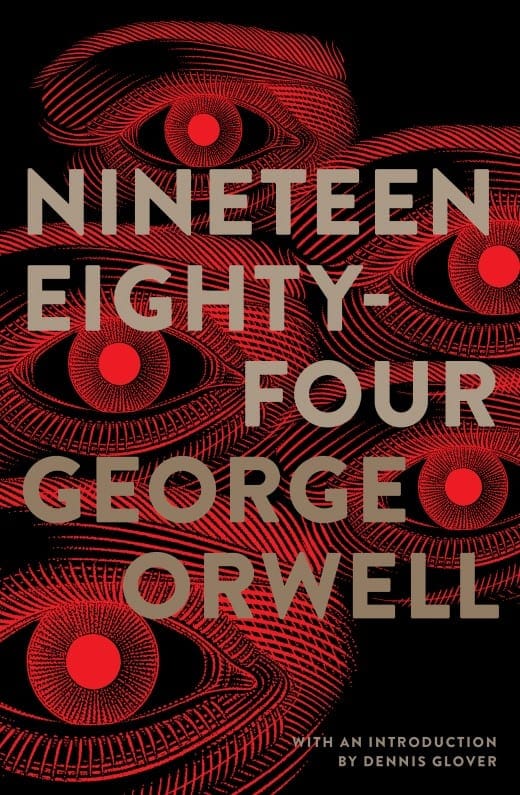 Orwell had to invent a new language to depict the world of his novel. A great number of the words and phrases are in common usage today, usually, again, as warnings of where we are going as a society, as we skate on the thin ice of the threat of Orwell’s dystopian society. The use of the term ‘Big Brother’, for example, is an expression of an attempt by authority to overstep its democratic purpose. In the novel, the phrase ‘Big Brother is watching you’ is a chilling reminder to everyone that any transgression of the strict code of civil oppression will be severely dealt with, and also that any such transgression will be immediately detected, due to the surveillance technology that controls all citizens. The concept of Big Brother is a demand for loyalty to the authority who is oppressing you.

Other, now commonly used terms, are ‘doublethink’ – simultaneously accepting two mutually contradictory ideas as correct; ‘thoughtcrime’ – holding unspoken beliefs or doubts that oppose or question the approved norm; ‘thinkpol’– the Thought Police and ‘unperson’ – someone who has been deprived of his/her civil existence. Orwell encompassed all those terms under the umbrella of ‘newspeak’ the official language of Oceana – speech that uses words in a way that changes their meaning to compel people to think in a certain way.

Nineteen Eighty-Four is a good example of how powerful fiction can be and how its message can resound down the generations. Many philosophical and political books have been written about the progress of civilisation and although their warnings have been as stark as Orwell’s, none have so memorably entered the consciousness of modern civilisation, and none have been so comprehensively quoted.

Here are some quotations from the novel that give an idea of its political flavour:

“If you want a picture of the future, imagine a boot stamping on a human face—forever.”

“Big Brother is watching you.”

“Power is in tearing human minds to pieces and putting them together again in new shapes of your own choosing.”

“The object of power is power.”