Oedipus The King: An Overview

You are here: Home1 / English Literature2 / The 20 Most Influential Works of Fiction3 / Oedipus The King: An Overview

Oedipus Rex  (Greek title: Oedipus Tyrannus) is a Greek tragedy by Sophocles, and was first performed in about 430 BCE.

Before the events of the play Oedipus has become king of Thebes after unwittingly fulfilling a prophecy that he would kill his father, Laius, the king, and marry his mother. He has solved the riddle of the Sphinx, which has set him on the path to restoring the land which has been devastated as a result of a plague. He has become king and taken his mother, Jocasta, as his queen. He does not know that she is his mother. This is where the action of the play begins. A plague has devastated Thebes and Oedipus understands that he can only end it by finding and punishing the king’s murderer, and the action is about his search for the killer. He doesn’t know that the murderer he is looking for is none other than himself.  The truth of all that comes out at the end of the play and Jocasta hangs herself. Oedipus’ realisation of the situation horrifies him and, in despair about his patricide and incest, gouges out his eyes. 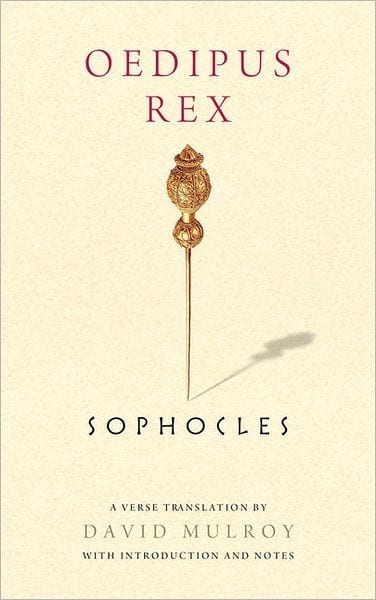 Sophocles based his play on a Theban legend in which King Lauius and Queen Jocasta have a baby boy. An oracle tells Lauius that he will die by the hand of his son so he orders Jocasta to kill the baby. Reluctant to do so she tells a servant to take the child to a mountainside and leave him there to die of exposure. A shepherd finds him and takes him home. He names him Oedipus. He takes the child to Corinth where the childless king, Polybus, adopts him and raises him as his own son. When he grows up Oedipus hears from an oracle that he is destined to kill his father and become sexually involved with his mother.  Believing that Polybus and Merope are his parents he is desperate to avoid his fate so he sets out for Thebes so that the prophecy cannot be fulfilled. Nearing Thebes he encounters Laius and they have a dispute about right of way on the road. They do not, of course, know each other’s identities. Lauis lunges at the young man and Oedipus kills him. He continues on to Thebes and after saving the city from devastation he is made king, upon which he takes the queen, Jocasta (his mother), as queen.

Apart from Aristotles’ deliberations and his pronouncement that it is the perfect tragedy in terms of plot and character, Oedipus Rex is relevant to all human beings of all times. It deals with universal themes and the flaws that affect human beings, particularly powerful human beings, today. It raises questions for all times, such as, how much do we know about our past history, our families, and about fate – what controls our lives, and how much power we have to do that ourselves. What effect does knowing the truth rather than living in a state of ignorance have? These are all questions that may cause us to examine ourselves.

Freud based his psychoanalysis on the play. It is full of riddles and reversals – all of which make it a deeply psychological play, and a model, not only for tragic dramas, but for any play or other work of fiction. It focuses on all themes imaginable in the lives of human beings – the riddles and mysteries of childhood, dreams, competition with same-sex parents and attraction to opposite-sex parents, efforts to take charge of our lives and defy destiny and much more.