You are here: Home1 / English Literature2 / The 20 Most Influential Works of Fiction3 / Paradise Lost: An Overview

Paradise Lost is a blank verse, epic poem by John Milton, first published in 1667.  A second version, consisting of twelve books, followed in 1674. The poem is the basis on which Milton is usually considered one of the greatest English poets.

Paradise Lost is based on the biblical story of the temptation of Adam and Eve in the Garden of Eden by the fallen angel, Satan, and their expulsion from the Garden. There are two narrative thrusts in the poem: one following Adam and Eve and the other following Satan, or Lucifer. The story begins after Satan and the other angels who have rebelled against God have been banished to Tartarus, better known as Hell. Satan leads the other rebel angels in a revenge campaign, helped by Mammon, Beelzebub, Belial and Moloch. He volunteers to disrupt and corrupt God’s latest creation – Earth – and his most proud creation, Mankind. Satan confronts the perils of the Abyss, and Chaos, the territory outside of Hell, and eventually enters God’s Earth, and finally the Garden of Eden itself. 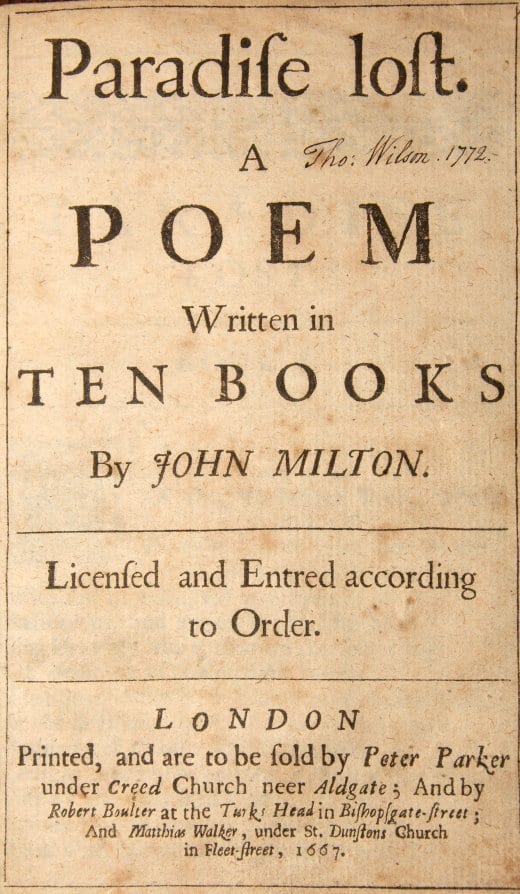 The story of Adam and Eve differs somewhat from that told in Genesis. In Paradise Lost they are presented as distinct personalities with personalities and passions, enjoying a romantic and sexual relationship without its being sinful. Satan disguises himself as a serpent and successfully tempts Eve to eat from the Tree, using persuasive language and playing on her vanity. Adam commits himself to Eve and knowingly also eats from the Tree because of his love for her. Once they have both eaten the fruit they commit their first sin –lust – something that has been absent from their ideal, romantic relationship. They experience guilt and shame for the first time and quarrel bitterly, each blaming the other for the transgression.

Satan is welcomed back to Hell as a hero. He has fouled God’s creation and caused His greatest creation to fall. But all the fallen angels, including Satan, turn into snakes, without limbs and unable to talk. All they can do is hiss.

Adam and Eve are cast out of Eden and condemned, along with all their descendants, to live with guilt and shame forever. The only hope for human beings’ redemption is through the coming, in the future, of the ‘King Messiah’, the Christ who will eventually come to redeem Mankind. From now on God will still be there, but distant from Mankind, and invisible.

The creation myth in Genesis is short and sketchy. It is from Paradise Lost that we get most of our notions about the Fall of Mankind and its imagery is ever present in the discourse about it.

Apart from that, Milton’s epic has been enormously influential on subsequent writers. Countless writers have been inspired to write their own versions of the Genesis myth and, in effect, to rewrite Paradise Lost. For example, the Romantic writers. Milton’s Satan has been described as ‘literature’s first Romantic’. Mary Shelley’s Frankenstein offers a strong parallel regarding the same questions of authority, the relationship between creator and created, and the created’s yearning for a female partner.

There have been many films and musical works based on Paradise Lost, and the poem has inspired a host of paintings and sculptures.

Paradise Lost substantially influenced the emergence of feminism in the 19th and 20th centuries. Milton exemplified the patriarchal tradition that persisted until then, with its several incidences of misogyny. Emily Bronte was one of the writers who felt it important to break from the tradition established by Milton. That introduced a new tradition by female writers of feminist literature, which became an important force and which is continues to grow in the 21st Century.