The Odyssey : An Overview

You are here: Home1 / English Literature2 / The 20 Most Influential Works of Fiction3 / The Odyssey : An Overview

The Odyssey is the second of two major ancient Greek epic poems attributed to a poet known as Homer. It is the name ascribed by the ancient Greeks to the author of the two epic poems, which are the central works of ancient Greek literature. The first, the Iliad, is set during the ten-year siege of the city of Troy by a coalition of Greek city states. The Odyssey focuses on the journey home of Odysseus, king of Ithaca, after the fall of Troy.

No poet can be identified as the author and it is not clear as to whether such a person as ‘Homer’ ever lived. Scholars believe that the stories in the Odyssey originated as oral performances by wandering poets and later, during the 8th Century BC, they were edited and written by ‘Homer’. 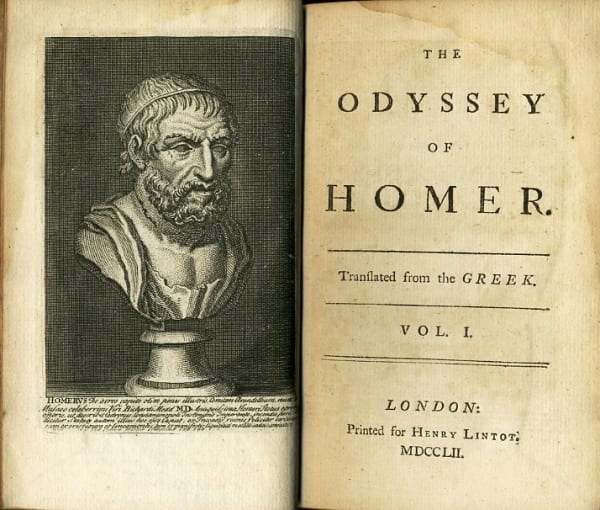 The poem focuses on the Greek hero Odysseus – or Ulysses, as he appears in Roman myths – king of Ithaca. It is about his adventures on his ten year journey home after the fall of Troy. By the time he gets home he has been away for twenty years. His family and friends have given him up for dead and when he gets home he has to deal with several unruly suitors for the hand of his wife, Penelope.

The poem is one of the earliest Western fictions and has seldom been surpassed in its imaginative storytelling. The characters and the stories they populate have been an inspiration to writers for three thousand years. They are every bit as familiar in our culture as Shakespeare’s are.

On his way home from the war Odysseus is trapped on the island of Ogygia by the beautiful nymph Calypso who keeps him captive. Finally the gods rescue him and he continues his journey home. The journey is full of adventures, some dangerous because of the temptations they provide and some because of physical dangers. He begins with a trip to the Land of the Lotus Eaters where he is in danger of sinking into forgetfulness. He then encounters the one-eyed giant, Polyphemus, the Cyclops son of Poseidon. After that he meets the enchantress Circe, who turns men into pigs and has a love affair with her. Out on the ocean he encounters the sirens, women who lure seamen towards them and draw them onto rocks. He travels to the underworld and meets Tiresias, the blind prophet and fights Scylla, the sea monster before returning to Ithaca.

It would be impossible to describe the full extent of the influence the Odyssey has had on western culture and literature. Homer invented the Greek gods we are familiar with as well as the Greek heroes and villains. All of those are deeply imbedded in the culture and western literature is saturated with them, some major works even based fully on the Odyssey, like James Joyce’s Ullyses. The stories are full of action and suspense, set in alien places with weird and unworldy characters. The television series Star Trek was heavily influenced by the Odyssey and episodes of the original series gives an idea of what the Odyssey is like. Some of the episodes are undiluted Homer.

The influence goes further. Some scholars have argued that the character of Jesus, as portrayed by the writer of the first gospel written, The Gospel of Mark, is based on the character and some of the adventures of Odysseus. The writer of Mark would have grown up in the Roman Empire where the school curriculum at that time was based largely on Homer’s epics. Some of the episodes are clearly taken from the Odyssey – for example the feeding of the five hundred, where even the wording is almost identical, and the episode where Jesus is asleep with his head on a pillow in a boat when a storm comes up, terrifying his disciples which invokes Jesus anger and he reprimands them for their cowardly behaviour. Here again, the wording is very similar. Like Jesus, Odysseus is a carpenter, the carpenter who made the wooden horse of Troy. Like Jesus, when Odysseus arrives at home, disguised as a beggar, he goes up a mountain, where he is transformed by the gods and comes down in clothes that look as though they have just been laundered – the same wording.