A young pregnant woman named Agnes Leeford enters a workhouse after a long walk and delivers a baby boy. She does not have a chance to explain who she is, and before she can name the infant she dies. Mr Bumble, a beadle, and the head of the workhouse, gives the new workhouse children names. He names the baby Oliver Twist.

Under the terms of the Poor Law, Oliver is guaranteed nourishment but he is in reality underprovided for. For the first nine years of his life, Oliver is perpetually hungry. He spends those first nine years of his life at a baby farm, looked after by a woman named Mrs Mann, with little food and few comforts. At the age of nine Mr Bumble removes him from the baby farm and puts him to work picking and weaving oakum – a tedious and painful job – at the main workhouse. Oliver, near to starvation during all his time in the workhouse lives there for six months before events intervene to change his life.

Nine years after Oliver’s birth the desperately hungry workhouse boys decide to do something about their plight. They decide that they will draw lots and the loser must ask for another portion of gruel. Oliver is the loser and at the next meal he comes forward and begs Mr. Bumble for another helping of gruel with his famous request: “Please, sir, may I have some more, please?” Mr Bumble and the Parish Board are enraged by the audacity of a child of no consequence daring to confront the beadle and they sell Oliver to an undertaker, Mr Sowerberry.

The Sowerberry household is very complicated and Oliver becomes a victim of the Sowerberrys’ unhappy marriage. Mrs Sowerberry favours Mr Sowerberry’s apprentice in the confrontational relationship that exists between the two boys. After an incident in which Oliver punches the apprentice, Mr Sowerberry is forced by his wife to whip Oliver. Oliver decides to run away to London to seek a better life. He walks the seventy miles to London. When he arrives he finds it bewildering, but he is being watched by a boy named Jack Dawkins, nicknamed the Artful Dodger, who befriends him and takes him to the loft where he lives with other boys.

A cunning, thoroughly bad old man, Fagin, a master thief, controls the boys and runs a pickpocketing racket, using the boys to commit crimes for him. The other adults in the gang are Nancy, a prostitute, and her boyfriend, Bill Sikes, a violent criminal,.

Oliver lives with Fagin and his gang of juvenile pickpockets in their lair at Saffron Hill for some time, unaware of their criminal occupation, which they initially conceal from him. He believes they are making wallets and handkerchiefs. Fagin, Dodger, and a boy named Charley Bates teach him how to steal while due to his innocence and inexperience Oliver doesn’t realise they are thieves, and regards the lessons as games.

One day when Oliver, Dodger, and Charley go out to steal they take Oliver with them. Dodger and Charley steal a handkerchief from an old man called Mr Brownlow. Oliver is frightened and takes flight. Mr. Brownlow, realising that he has been pickpocketed, thinks Oliver is a thief. Oliver is caught and taken to court. He is almost found guilty, but the bookseller tells everyone he saw the real thieves (Dodger and Charley). Mr. Brownlow takes Oliver to his house and cares for him while he recovers from a fever.

Oliver begins to recover. He wins the trust of the household  and everyone likes him. But Fagin, afraid that Oliver might tell the police about his criminal gang, decides that Oliver must be retrieved. When Mr Brownlow sends Oliver out to pay for some books, one of them – Nancy -whom Oliver knows, approaches him, and with the help of her abusive lover, Bill Sykes, he is quickly taken back to Fagin’s loft. The thieves take the five-pound note Mr Brownlow had entrusted to him, The other boys bully him for his fancy clothes and strip him of them. Oliver, shocked, flees and attempts to call for police assistance, but is dragged back by the Artful Dodger, Charley, and Fagin. Nancy saves him from being beaten by Fagin and Sikes.

Fagin is determined to draw Oliver back into a life of crime. He forces him to participate in a burglary. Nancy has to go along with it but she assures Oliver that she will help him if she can. Sikes, threatens to kill him if he doesn’t cooperate.  He puts him through a small window and orders him to unlock the front door. The robbery goes wrong and Oliver is shot by people in the house and wounded in his arm. Sikes abandons him and he makes it back to the house they were trying to rob and ends up under the care of Miss Rose and her guardian Mrs Maylie, the people he was supposed to rob.

While he is there, Fagin and a mysterious young man named Monks conspire together to get him back. Rose Maylie, while on a trip to London with her family, joins Mr. Brownlow in a meeting with Nancy, who has given Bill Sikes the slip to explain Monks and Fagin’s plot to get Oliver back. She gives them a description of Monks and tells them when the best time is to catch him unawares.  But news of her betrayal reaches Sikes’s ears, and he beats her to death. Sikes is pursued, and while trying to escape accidentally hangs himself. The Maylies rake Oliver back to Mr. Brownlow, who forces Monks to explain himself.

We now learn that Monks is Oliver’s half-brother and that Oliver is the heir to a large fortune, which Monks would get if Oliver were to die. In the event, as Monks’ plan is exposed as a crime he is arrested. Fagin is hanged, and the Maylies, Oliver, and Mr. Brownlow move into the country where Oliver has the chance to grow up to enjoy a prosperous and useful life.

That’s our Oliver Twist summary. Make sense? Any questions? Let us know in the comments section below! 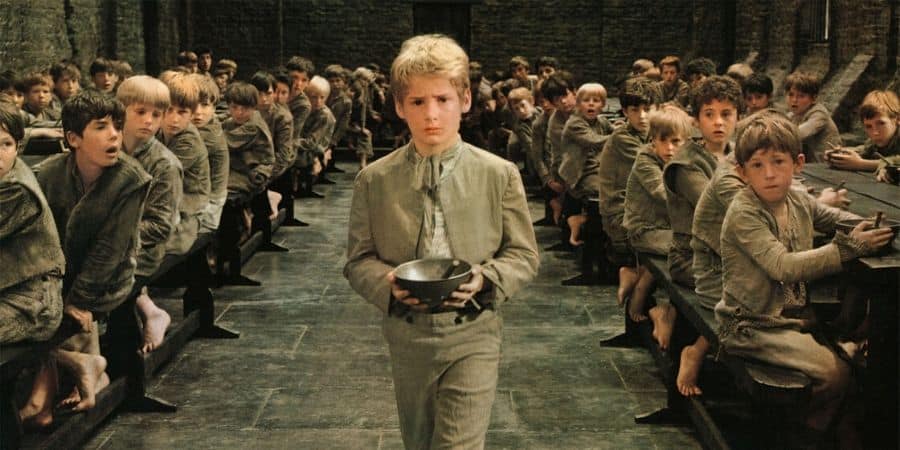