William Shakespeare is generally considered as one of the greatest poets who ever lived: This isn’t confined to the relatively small body of poems he produced, or his 154 sonnets but also to the poetic content of his plays. Throughout his works Shakespeare used many classic poetic devices:

No writer ever comes up with anything absolutely new: all poetry is produced as steps on a progressing path and so all poets are, in a sense, the heirs of the great poets of the past: they learn techniques and devices from those poetic ancestors, duplicating them and building on them. And so we see in Shakespeare’s poetry, devices used by Homer in the Iliad and the Odyssey, and employed by subsequent poets, and so on, up to Shakespeare and beyond.

Devices in the epic poems of Homer run through Shakespeare’s poetry:

Of princes, shall outlive this powerful rhyme;
But you shall shine more bright in these contents…

There are two assonance examples there; the first is the short “i” sound in “princes” and “outlive” and the second is the long “i” sound in “shine” and “bright.”

One of the most famous short sentences in the English language – strange, mysterious and memorable – is built with a combination of alliteration and assonance: “Fair is foul and foul is fair,” from Macbeth.

So in a rush each Argive captain killed his man.
As ravenous wolves come swooping down on lambs or kids
To snatch them away-from right amidst their flock—all lost
When a careless shepherd leaves them straggling down the hills
And quickly spotting a chance the wolf pack picks them off,
No heart for the fight – so the Achaeans mauled the Trojans.

All the world’s a stage, and all the men and women merely players;
They have their exits and their entrances;

And one man in his time plays many parts.
(As You Like It)

But soft! What light through yonder window breaks?
It is the East, and Juliet is the sun!
Arise, fair sun, and kill the envious moon,
Who is already sick and pale with grief.
(Romeo and Juliet)

It is one thing to outline the influence of the Greek poets on Shakespeare but it is the way Shakespeare uses those poetic devices that makes him unique.

Shakespeare’s technique developed as he gained experience. In the early plays he wrote in the conventional style of the day but as he moved more comfortably in writing plays to be performed before an audience in the theatre the more he moved away from stylised language to language that sprang from the needs of the characters and the dramas. Rhetorical language gave way to the naturalistic speech of real people, even though it was written in verse. This is a central point in Shakespeare’s technique: his use of verse to make his characters appear to be talking in the natural language of speech while at the same time being highly poetic.

His standard poetic form was blank verse, all in iambic pentameter; ie. Unrhymed verse consisting of ten syllables in a line, spoken with a stress on every second syllable. Shakespeare’s contemporaries used the same form but his verse is very much more alive and vibrant than most of theirs. Iambic pentameter has a sing-song movement and is in danger of being monotonous if sentences start at the beginning and finish at the end of lines. This occurs in Shakespeare’s early plays but he became a master of manipulating the iambic pentameter by interrupting and varying its flow, pausing at various places in a line, running one line into another, using long and short vowels and so on, forcing actors to speak the lines in a way that was like natural speech, even though the basic ten-syllable line with the stress on every second syllable, remained. By doing that he had the flexibility to portray every expression of human feeling. Here is Othello almost literally drowning in his emotions as he compares his state of mind to an ocean current. The verse imitates the swirling, tugging, movement of a strong ocean current that will drown anyone caught in it:

Like to the Pontic sea,
Whose icy current and compulsive course
Ne’er feels retiring ebb, but keeps due on
To the Propontic and the Hellespont,
Even so my bloody thoughts, with violent pace,
Shall ne’er look back, ne’er ebb to humble love,
Till that a capable and wide revenge
Swallow them up.

And in Measure for Measure, Claudio, about to be executed, shows his aguish as he imagines the horror of being dead.

Ay, but to die, and go we know not where;
To lie in cold obstruction and to rot;
This sensible warm motion to become
A kneaded clod; and the delighted spirit
To bathe in fiery floods, or to reside
In thrilling region of thick-ribbed ice;
To be imprison’d in the viewless winds,
And blown with restless violence round about
The pendent world;

In both examples Shakespeare sticks strictly to iambic pentameter. His manipulation of it demonstrates his poetic technique. His use of blank verse iambic pentameter allowed him to go deeper and deeper, and so we have the tumultuous mind of Hamlet and the chaotic madness of Lear, expressed, using the same technique.

Shakespeare used the flexibility of blank verse combined with iambic pentameter, together with poetic devices like assonance, alliteration, extended similes and personification to present characters with varied motivations expressed through their individual patterns of speech.  For example, in Othello, the tension and conflict are created by the interaction of two protagonists who have opposing motivations and outlooks on life. Othello speaks with round, open vowels and formal, poetic images, full of allusions, delivered in measured sentences in a stately manner which, put together, present a picture of a noble, educated man. Iago is a linguistic chameleon who infiltrates the minds of his victims by mimicking their speech patterns when he talks to them. However, when Iago is alone and expressing himself with only the audience hearing him his language is something completely different. Here is Othello addressing the Venetian senate, explaining how it was that Desdemona fell in love with him:

My story being done,
She gave me for my pains a world of sighs:
She swore, in faith, twas strange, ’twas passing strange,
‘Twas pitiful, ’twas wondrous pitiful:
She wish’d she had not heard it, yet she wish’d
That heaven had made her such a man: she thank’d me,
And bade me, if I had a friend that loved her,
I should but teach him how to tell my story.
And that would woo her. Upon this hint I spake:
She loved me for the dangers I had pass’d,
And I loved her that she did pity them.
This only is the witchcraft I have used.

Notice Shakespeare’s use of long vowels to create a character who comes across as deliberate, noble and serious. Words like ‘world’, ‘sighs’, ‘wondrous’, ‘loved’, ‘woo,’ and so on, long vowels combined with soft consonants – lots of ‘w’s and ‘h’s – give the speaker his distinctive speech pattern, which is maintained throughout and becomes even more marked as his deepest emotions are unveiled. A line like ‘She gave me for my pains a world of sighs’, can be stretched out at the actor’s leisure but designed not to be able to be spoken fast.

Here is Iago speaking when only the audience can hear him:

When devils will the blackest sins put on,
They do suggest at first with heavenly shows,
As I do now: for whiles this honest fool
Plies Desdemona to repair his fortunes
And she for him pleads strongly to the Moor,
I’ll pour this pestilence into his ear,
That she repeals him for her body’s lust;
And by how much she strives to do him good,
She shall undo her credit with the Moor.
So will I turn her virtue into pitch,
And out of her own goodness make the net
That shall enmesh them all.

The passage is almost devoid of long vowels and full of short ones in words like ‘credit’, ‘net’, ‘pitch’ etc. Shakespeare presents Iago as a hissing, spitting, character by saturating his speech with ‘s’s and using words like ‘devils,’ ‘pestilence,’ ‘lust,’ ‘pitch,’ ‘enmesh’.  The passage is designed to be spoken at a rapid pace.

Shakespeare uses this characterising technique throughout his works to create characters so distinct from each other that someone well-read in Shakespeare will be able to identify characters from extracts from their dialogue.

And so, Shakespeare’s poetic techniques can be described as the use of every device available to a poet but stretched, subverted and transformed to meet his needs. It is the genius with which he approaches the available poetic devices that produces his poetic technique. 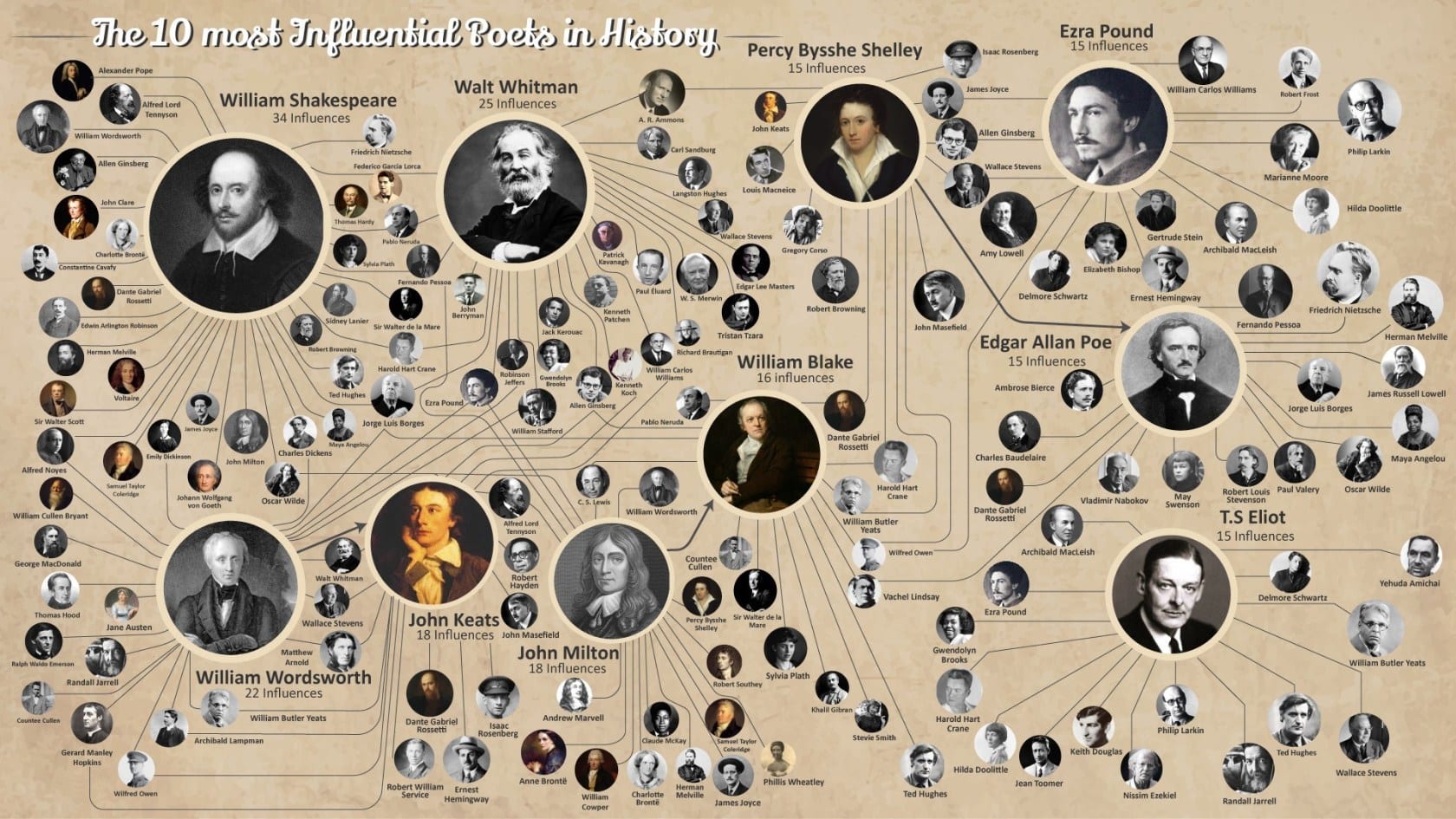