Read a character sketch of Santiago

Santiago is an elderly Cuban fisherman who has gone eighty-four days without catching a fish. He is a simple, uneducated man whose years of strength and youthful energy are well behind him. He lives in a small shack on the coast, eats simply, and sleeps on a bed of newspapers. In his youth, Santiago had worked on large, open sea sailing vessels. He had travelled to Africa, where he saw lions lying on the white sand beach, an image that recurs frequently in his dreams, and during his ordeal on the sea he draws strength from mental images of the lions.

Although some of the other fishermen pity, and sometimes even make fun of, his old age and lack of luck, Santiago is never resentful. It is a close-knit community and he is highly respected by a community of hard-working men who know that a spell of bad luck is something that could happen to anyone.

Santiago loves the sea for everything it has given him and he deeply respects the great fish at the same time as he struggles to kill it because it is noble and beautiful. He develops a relationship with the fish based on what he takes to be mutual respect, like the relationship between the bullfighter and the bull.

The old man has a young apprentice who plays a minor role in the novella: through his interactions with Manolin the old man demonstrates his kind, compassionate side. He patiently teaches the boy about the technicalities of fishing and tells him stories about his life. The two have a mutual interest in baseball and that is a major topic of conversation between them. The old man has passed his admiration for the baseball star, Joe DiMaggio, to the boy. DiMaggio is Santiago’s hero and he draws on thoughts of the baseball player for inspiration during his ordeal. Di Maggio suffered from bone spurs in his feet but played on and triumphed in spite of the pain.

During the course of the novella Santiago is shown to be cheerful, determined, confident, brave, and optimistic. He hasn’t caught a fish for eighty-four days but he is not in the slightest bit discouraged. Instead, he determines to go further out in the hopes of catching a large fish.

He is a very experienced fisherman and has achieved a high level of expertise. He is skilled and meticulous. He prepares carefully for each outing on his boat. He is in tune with the sea and the sky, watching the weather, the currents, birds, and fish to help him know the best spots for fishing.

Although he is strong, able and an expert in his work, Santiago is a humble man. He is very accepting of his simple living conditions and never complains. He also accepts that any failures he may have are not due to anyone or anything else. That he has not caught a fish for so long is not the fault of others or the weather or anything like that: he looks within himself for the cause. As he sees it, it is his fault because he does not go out far enough. When the fish is eaten by the shark he blames himself for not bringing better weapons and for not fighting hard enough. Although he fights the sharks with all his remaining strength he never blames them for doing what they were born to do.

The most striking thing about Santiago is his determination. He has gone a quarter of the year without catching a single fish but he keeps going out. He goes out every day and does what he has always done: sit and wait for the fish to take the bait. During the past three months he has done nothing different or wrong; he’s just having a run of bad luck.

On this particular outing, his skill and strength are put to the test. Suffering from dizziness, and badly injured, he perseveres, and brings in the largest fish he has ever seen. And after succeeding in that, still exhausted, he spends a day and a night fighting off sharks with makeshift weapons. All that presents us with a man of enormous determination.

He uses every kind of tactic to summon up and maintain his determination. He talks to himself, encouraging himself, as though there is an eternal figure pushing him. ”I am not good for many more turns. Yes you are, he told himself. You’re good forever.” He thinks about his friendship with the boy; he recalls episodes in his youth, particularly some feats of strength, for example, a memorable hand wrestling match.

In spite of his humble lifestyle and unpresumptuous manner, Santiago is a proud man. He is very aware of that and chastises himself for it. After the sharks have destroyed his marlin, Santiago muses that it’s his exaggerated pride that has ruined both the marlin and himself. However, it is his pride that also enables him to achieve his most true and complete self. It is also his pride that helps him earn the deeper respect of the village fishermen. He knows that he will never have to prove himself to the fishing community again.

Santiago’s pride, too, is what enables him to endure: endurance is important in a world in which death and destruction, as part of the natural order of things, are unavoidable. His unswerving determination is mythic, with Christ-like suggestions. He holds fast to the line that links him to the fish for three days, even though it cuts deeply into his palms, causes a crippling cramp in his left hand, and ruins his back. His bodily aches attest to the fact that he is a worthy fisherman. He is connected to the natural world around him and that allows him to escape defeat. The struggle with the marlin has taken all his strength and the sharks have destroyed him but he remains undefeated. The old man’s physical suffering has led him to a more significant spiritual triumph.

That’s our Santiago character analysis. Make sense? Any questions? Let us know in the comments section below! 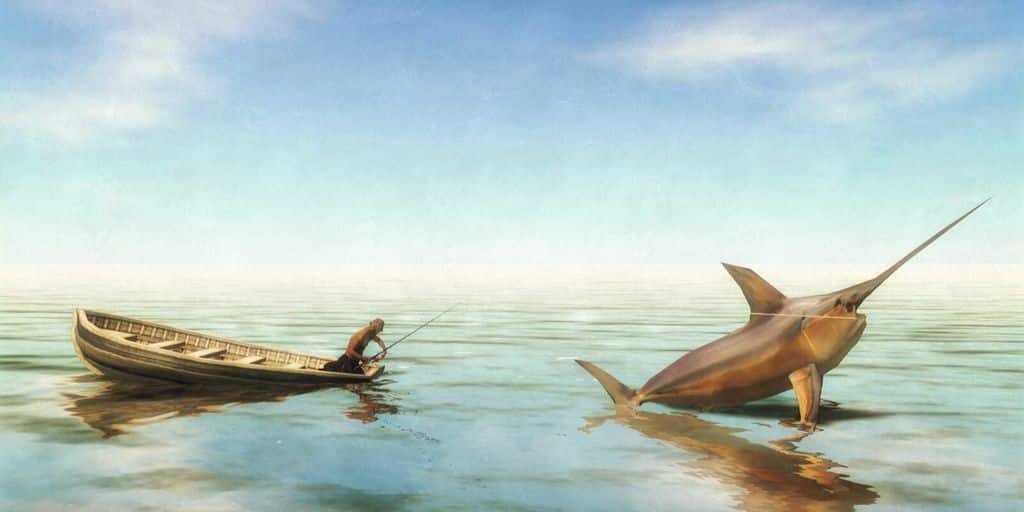 The old man – Santiago – battles with the marlin.