Whatever else one may say about Kenneth Branagh’s 1996 film adaptation of Hamlet, it is a visual joy. Moreover, although it is four hours long – much longer than any film has a reasonable right to be – Branagh managed to make it riveting. Even a four-hour stage performance of the play is risky for a director. It’s possible that Shakespeare didn’t intend it to be that long and that subsequent editing included things that Shakespeare would have excluded for his own production. T. S. Eliot found the play bewildering. He complained that Shakespeare “has left in superfluous and inconsistent scenes which even hasty revision should have noticed.”

Long before he started his career in film-making Branagh advocated full-length productions of Shakespeare’s plays on film, and when he had the chance to put his money where his mouth was, he directed a full-length Henry V in 1989. It has since become recognised by many critics to be the best film version of any Shakespeare play ever.

He went on to direct Much Ado About Nothing in 1993, again to wide critical acclaim. And then Hamlet in 1996.

Shakespeare set the play in the medieval period, and he had his reasons for that, but Branagh chose to set it in Napoleonic times. That changed the austerity that Shakespeare intended to the more opulent Empire style of Napoleonic Europe. It makes sense cinematically because every scene is filled with the luxury of a late eighteenth-century royal court. However, advancing the period by several hundred years confuses the political background to the play – for example, the tribute that England paid to Denmark in the medieval period doesn’t make sense in the Napoleonic setting. It also affects the atmosphere Shakespeare intended, which was a minimal physical backdrop of battlements, castle walls and huge bare stone halls. In Branagh’s film, we have a sumptuous environment of wealth and luxury.

The film was not a critical success. Branagh went on to make some great films, like Shackleton and Warm Springs, both great films, but Hamlet is not spoken of in critical circles as a great film. It’s difficult to see why Hamlet was not more successful as, in many ways, it worked well.

Branagh’s own performance, as the prince is brilliant. Hamlet is generally thought of in the public mind, as a dour, melancholy young man on the verge of suicide. An examination of the text, though, shows another side to him – a funny, game-playing tease. He winds some of the characters around his fingers and toys with them. He goads Polonius mercilessly, he buffets Rosencrantz and Guildenstern back and forth with banter until they don’t know where they are and he crucifies Osrick with a cruel tongue.

Branagh plays the role in that way – an intelligent man who uses humour to relate to the ordinary world around him and the ordinary people in it. He has a talent for playing quirky characters and he uses it here in abundance, sometimes going over the top. At the same time, he is able to draw the audience into the prince’s inner thoughts convincingly.  In paying attention to both those aspects of the prince Branagh is presenting the character as Shakespeare intended Hamlet to be.

The choice of actors for the other characters is interesting. He uses his own favourite English actors in the major roles, resulting in some masterful performances: Derek Jacobi as Claudius, Julie Christie as Gertrude and Kate Winslet as Ophelia. He overlays that with actors who work with him in his company: Richard Briers as Polonius, Michael Maloney as Laertes, Nicholas Farrell as Horatio and a weirdly restrained Brian Blessed as the ghost.

One of the most interesting and arresting things about the casting is that Branagh uses big movie stars to fill the minor roles. It’s quite a shock, verging on a distraction, to realise that the player king is Charlton Heston, and his queen, Hecuba, Judi Dench. Likewise, Gerard Depardieu in a walk-on part as Reynaldo.  Ambassadors arrive from England and Richard Attenborough is one of them. Billy Crystal is a gravedigger, Jack Lemon is Marcellus and Robin Williams a funny Osric.

Yorick may be famous but he has no role in the play – he’s only an inanimate skull. When Hamlet holds the skull up and begins talking about his father’s jester, we see that the skull has prominent teeth. And then, in one of the film’s many flashbacks we see the living, jesting jester and we see that he’s none other than Ken Dodd, teeth and all.

This collection of Hollywood and British film luminaries came together in the celebration of Shakespeare that this film is – his genius and the greatness of his poetry. Their roles may be small but each one has some immortal lines of poetry to deliver and some acting to do. As Branagh himself said: Shakespeare is “not a matter of life and death. It’s much more important than that.” 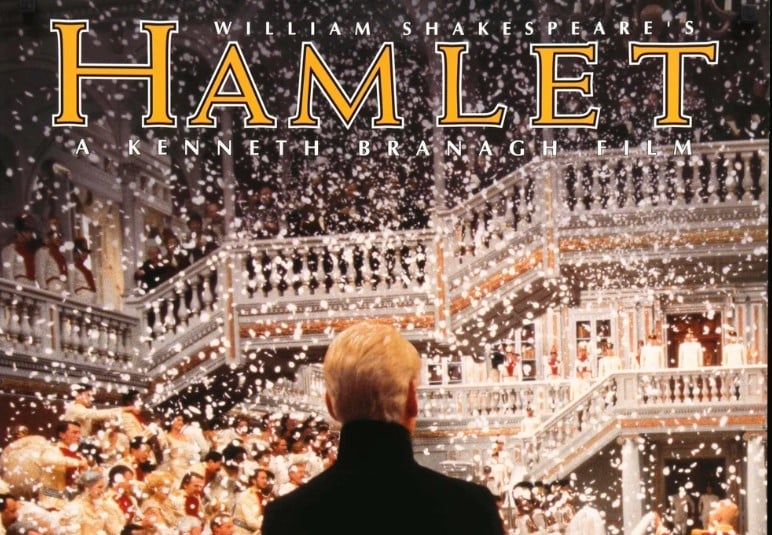