Nunn’s 1978 Macbeth movie is not cinematic in any way – it’s theatrical, a television version of the Royal Shakespeare Company’s stage production – but nevertheless a brilliant film.

The actors sit in a large circle and come forward for their performances. Most of the time you are unaware of the circle of actors as the filming is always close-up with the focus on the characters, isolated and lit, with darkness all around them. The language of the play indicates the perpetual darkness, as this is a vision of Hell. Macbeth and Lady Macbeth have turned their castle into a hell and when Duncan enters beneath its portals that’s what he is going into. The comic scene with the porter at the gate spells it out, even if the images of Hell throughout pass you by, which they won’t because of the way the actors deal with the poetry.

The emphasis is therefore on the acting, and you wouldn’t find better acting anywhere, especially as this is among the finest performances of these two great actors. 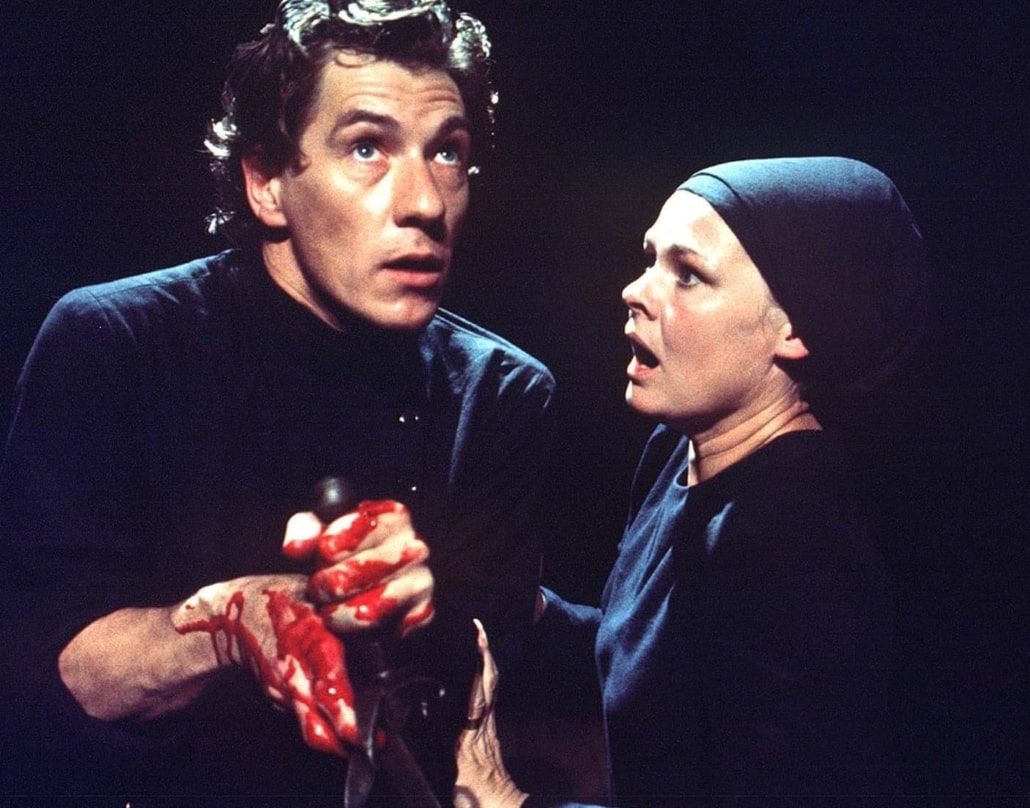 There are no sets, only imaginative lighting and camera work. Colour is muted, the only real colour being the blood on Macbeth’s hands after he has murdered Duncan. The focus is mainly on the faces, which fill the whole screen. McKellen, particularly, conveys Macbeth’s emotions with language combined with facial expression.

One of the most striking and memorable moments is when Macbeth says ‘What hands are here? They pluck out my eyes.’ His hands, gleaming with blood, fill the screen as he contemplates what he has done. As blood is the most important poetic idea in the Hamlet text, much attention is given to that scene.

When Banquo’s ghost appears, twice, all you see is McKellen’s face as he suffers extreme guilt and emotional pain. He is physically sick as he confronts the ghost, which, of course, no-one else sees. When he goes to the witches to find out more about his fate, instead of a parade of spirits, which you see in Polanski’s film of 1971, once again the focus is on McKellen’s face. He makes the language work in the way he deals with it.

Judi Dench, dressed throughout in a tight black bodysuit, appears for the most part, as a white face, the darkness in which she exists being the main feature.

This is a version that you must see. It’s entirely faithful to the text, uncut and complete. Trevor Nunn and the two actors show an impressive understanding of the text and their interpretation of it is as definitive as any interpretation could be.