Shakespeare’s play Macbeth has been done many times on stage, and many times on the silver screen. Read reviews of the very best Macbeth movies below – specifically Roman Polanski’s 1971 Macbeth movie, and Trevor Nunn’s 1978 version of Macbeth on the big screen. 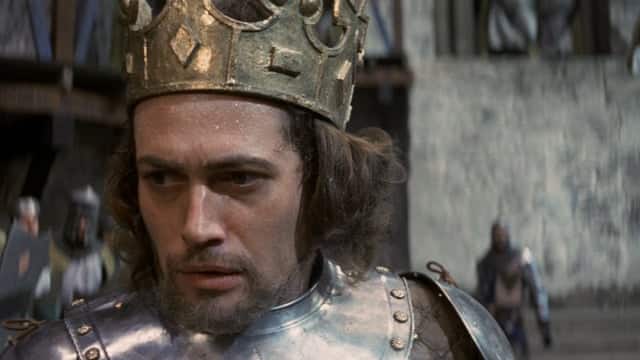 It is surprising that so few films have been made of Shakespeare’s Macbeth, given that the play is such an exciting drama, filled with all the ingredients that would keep an audience on the edge of their seats.

Certainly, when Polanski’s 1971 Macbeth movie came out in 1971 it was a blockbuster. The cinemas filled up with group bookings by schools as teachers crocodiled their students to the local theatre. It met the cinematic expectations of movie-goers of the time, with its extreme and vivid violence, nudity, close-up face to face fighting and special effects. And it was a brilliant resource for students coming to Shakespeare for the first time. If you watch it now it’s almost laughable in how dated it seems.

More serious, though, is its illustration of Polanski’s misunderstanding of the play. When Macbeth is on his way to murder Duncan he is drawn to his chamber by a dagger that he sees, leading him on. It’s clear that Macbeth is imagining the dagger but Polanski can’t resist the opportunity for a special effect – a dagger that hangs in the air, glowing, and moving forward, literally leading Macbeth. Although Shakespeare has the stage direction for Banquo’s ghost to appear it is clear in the text that it’s an image of Macbeth’s fear and guilt, and the appearance of an actor is a distraction from Macbeth’s reaction. It’s a matter of judgment as to whether to have an actual ghost, and in this case, it’s bad judgment.

One of the great aspects of this play is the way Shakespeare manipulates audience response to Macbeth throughout the text. Your sympathies are entirely with Macbeth at first, even and especially after the murder of Duncan, until the brutal slaughter of  Macduff’s family. After that, you see Macbeth for the brutal, power-hungry tyrant that he has become. When he eventually accepts his condition and puts on his soldier’s uniform and becomes something of his old self your sympathies return. In the first part of the play, Shakespeare takes you deep into Macbeth’s mind and you travel down his path, identifying with his ambition and desire, hardly unaware of the horror you are entering into. And after Duncan’s murder, you are still deep in there, experiencing Macbeth’s fear and guilt for yourself. It is important, therefore, that you do not see Macbeth killing Duncan. That’s why Shakespeare has the murder take place offstage. Polanski can’t resist inserting a murder scene, thus spoiling the play entirely. When, in the exact middle of the play, you see a little child brutally murdered on stage – one of the most horrifying things that can happen in human life – you are shocked and appalled and you’re jerked out of Macbeth’s mind. Shakespeare helps you by showing Macbeth through the eyes of others for the first time. Polanski misses all of that.

This may still be a way of introducing students to the play but there are better ways available now, and better film versions, particularly The Royal Shakespeare Company’s 1978 version with Ian McKellen and Judi Dench.

See reviews of all Macbeth movies >>