The Comedy of Errors Summary

You are here: Home1 / Shakespeare Play Summaries2 / The Comedy of Errors Summary

Here is a short The Comedy of Errors summary:

The Comedy of Errors is probably the most complicated of all Shakespeare’s plays, involving two sets of identical twins with multiple identity confusions. It begins with a Syracuse merchant, Egeon, being led to his execution for defying the ban against travel between Syracuse and Ephesus. As he is taken to the gallows he tells Duke Solinus, the Ephesian ruler, that he has come in search of his wife and one of his twin sons, who were lost twenty-five years before in a shipwreck. The other twin is also searching for his mother and brother. The Duke feels sorry for Egeon and gives him a day’s stay of execution, to allow him to raise the ransom that would save his life.

What Egeon doesn’t know is that the son he has raised, Antipholus, and his slave, Dromio, have also arrived in Ephesus and that the missing son lives in Ephesus and has become a prosperous man, involved in the civic life of the city. He is well-known as Antipholus of Ephesus. He also has a slave, called Dromio who is the identical twin brother of Dromio of Syracuse. They had been separated at birth.

When Antipholus of Syracuse sees Adriana’s sister, Luciana, he falls in love with her. Believing him to be her brother-in-law, she is shocked by his flirtatious behaviour.

Another confusion occurs when Antipholus of Syracuse receives a gold chain bought by his brother. When Antipholus of Ephesus refuses to pay for the chain on the grounds that he hasn’t received it, he is arrested for debt. Adriana, not used to such behaviour from him, thinks that he has gone crazy and orders servants to tie him up and lock him in the basement. Antipholus of Syracuse and his slave are finding events in Ephasus unreal and decide to leave the city but are pursued by Adriana and the debt collector. They elude them and claim asylum in an abbey.

Adriana goes to the Duke and appeals to him to remove the man she believes to be her husband from the abbey and hand him over to her. Antipholus of Ephesus, her actual husband, has broken out of the cellar and demands that the Duke take action against his wife for what she has done to him. All the complications unravel when Emelia, the Abbess, brings the two sets of twins together. She turns out to be the long-lost wife of Egeus. The brothers are reconciled with each other and their parents; the couples are united and the two Dromios embrace.

And that’s a quick The Comedy of Errors summary. What are your thoughts – anything unclear, or missing? Please let us know in the comments section below. 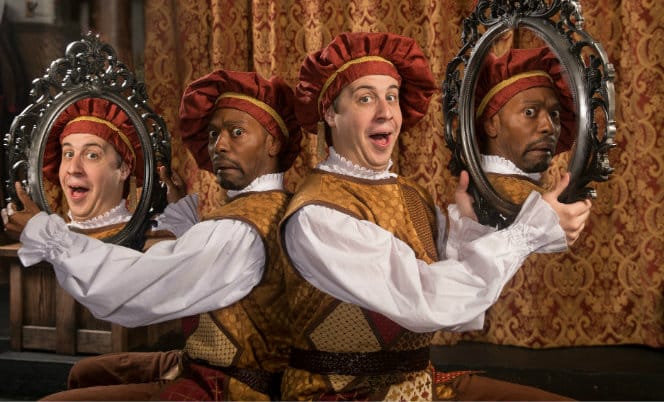 Twintastic The Comedy of Errors summary