The play opens in the aftermath of the death of King Henry V.

News reaches England of military setbacks in France, and the scene shifts to Orleans, where ‘La Pucelle’ (Joan of Arc) is encouraging the Dauphin to resist. She defeats an English army led by Talbot.

In England, Richard, Duke of York, quarrels with John Beaufort, 1st Duke of Somerset about his claim on the throne. The lords select red or white roses, depending on whether they favour the House of Lancaster or the House of York. Edmund Mortimer, a leading claimant to the throne, is a prisoner in the Tower of London and declares Richard his heir. The young Henry VI honours both Richard and Talbot.

Talbot dies bravely in his next battle against the French. In the meantime, King Henry is married off to a young French princess, Margaret of Anjou. Suffolk intends to control the king through Margaret. Ill feeling between him and the Duke of Gloucester continues to grow.

This play ends without a resolution, and the story is continued in Henry VI Part 2.

And that’s a quick Henry VI Part 1 summary. What are your thoughts – anything unclear, or missing? Please let us know in the comments section below. 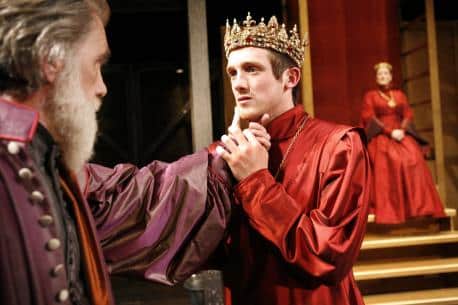 Henry VI Part 1 play on stage at the Globe Theatre