Cardinal Wolsey, a close advisor to Henry VIII’s father, Henry VII, has framed the Duke of Buckingham for treason, who is executed. The Queen, Katherine, hates Wolsey and he is also hated by the people because of the plot against Buckingham and the harsh, unfair taxes he is imposing in the King’s name. The King goes to a party hosted by Wolsely and falls in love with Anne Bullen, a lady-in-waiting to the Queen.

Henry, married to Katherine for twenty years, decides that the marriage is not legal because she is the widow of his brother, and it is therefore incest. He asks Wolsey for his advice. Because of this Wolsey becomes even more hated, both by Katherine and the people, so he can’t agree to Henry’s solution of a divorce, but he agrees to put it the Pope, who will send someone to investigate and make a ruling. Katherine regards the marriage as sacred but she has to submit to the proceedings.

Wolsey’s enemies are active, and the situation compounded by some bad luck, he begins to lose the confidence of Henry. Also, Henry sees him as a stumbling block to the divorce. Wolsey knows that Henry is determined to marry Anne Bullen so he advises the Pope to postpone a decision. With Wolsey in disgrace, Henry goes ahead with the divorce and the remarriage without any regard to the Pope’s opinion. Wolsey then dies, followed soon after by Katherine.

The new Archbishop of Canterbury has a plot hatched against him by Wolsey’s secretary, Gardiner, who is tried and executed for treason. Henry has a daughter, Elizabeth, by Anne Bullen. Cranmer christens her and makes a speech foretelling a noble rule for Elizabeth, and a glorious period of history during her reign.

And that’s a quick Henry VIII summary. What are your thoughts – anything unclear, or missing? Please let us know in the comments section below. 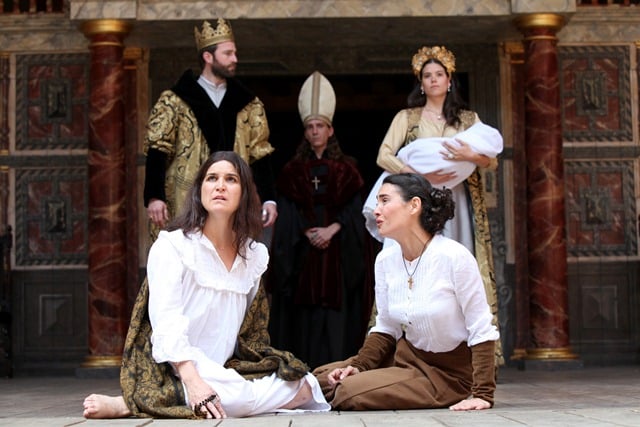 Henry VIII summary on stage at The Broad Stage