Shakespeare’s Twelfth Night opens with the lovesick, Orsino, Duke of Illyria feeling sorry for himself as his beautiful neighbour, Countess Olivia, has been rejecting his advances. She has sworn to have nothing to do with men for seven years as she plans to spend that time mourning the death of her brother.

On the coast of Illyria there has been a shipwreck. A young woman, Viola, has survived and is stranded on the beach. She has heard reports that her twin brother was drowned in the stormy sea. In spite of her grief, she decides to be positive and seek a job in Illyria. She has heard of the Duke and, with the help of a sea captain she disguises herself as a boy and is appointed as a page in Orsino’s household.

Orsino is determined to woo Olivia in one way or another and he sends Viola, now known as Cesario, to do it on his behalf. The first complication is that Viola has fallen in love with Orsino at first sight. The next is that after going through the wooing process she is pursued by Olivia’s pompous steward, Malvolio to give her a ring from Olivia, who has fallen in love with the young page.

Olivia has a large household with several servants and guests, including her fat, gluttonous, drunkard uncle, Sir Toby Belch, who lives permanently with her. He has welcomed the absurd Sir Andrew Aguecheek, who is visiting him in the hope of being able to woo his niece, and encourages him in his hopeless venture, taking money from him and making fun of him. Their late night drinking and carousing has angered Malvolio, who threatens them. With the help of some servants, including one of Olivia’s ladies in waiting, Maria, they use a false letter to trick him into believing that Olivia is in love with him. In the letter she tells the black-clad puritan to appear in the latest fashion – yellow stocking and cross-garters – and to smile, something no-one has ever seen him do. He does that and Olivia is horrified. Malvolio is locked up in a dark cell as a madman.

We now learn that Viola’s twin brother, Sebastian, has also survived the shipwreck, and with the help of Antonio, a pirate captain, goes into the town. He meets Olivia who thinks he is Cesario. She declares her love for him and they become engaged. Sir Andrew, jealous of the disguised Viola, led on by Sir Toby, challenges the young page to a duel. Neither wants to fight but, egged on by Sir Toby, they begin the duel. Antonio, passing by, thinking that Cesario is Sebastian, intervenes and recognised by the police as the wanted pirate, is arrested.

All the confusion is resolved when everyone sees the twins together. The plot against Malvolio is exposed and he is released, assuring the plotters that he will get his revenge on them. Orsino realises that he is in love with Viola and promises to marry her as soon as she dresses as a woman. Olivia and Sebastian celebrate their union. 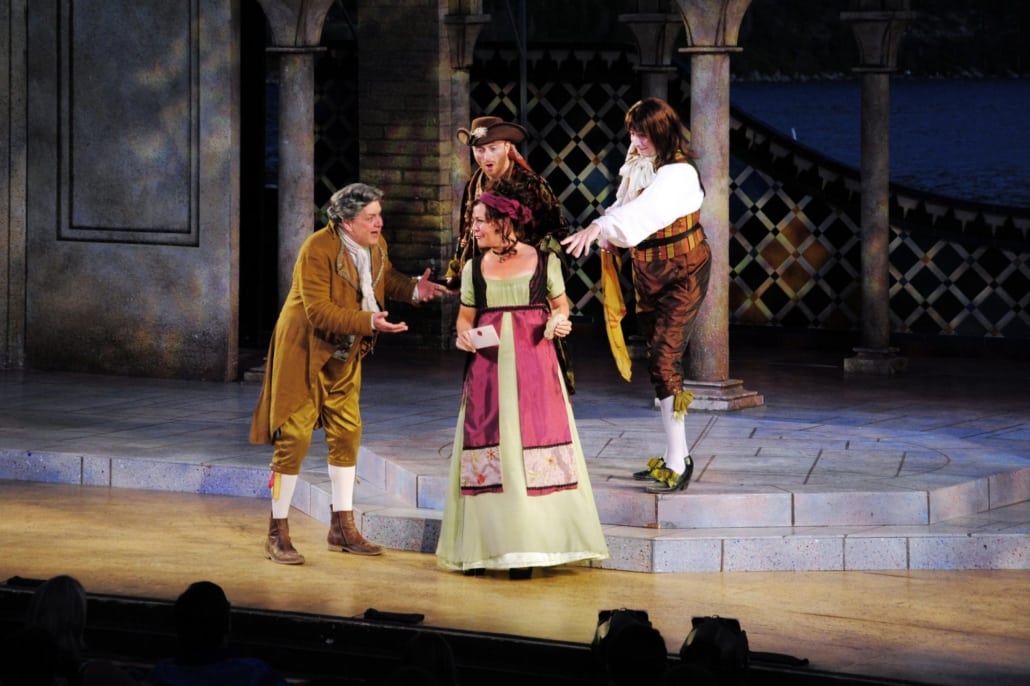