The Two Gentlemen of Verona Summary

You are here: Home1 / Shakespeare Play Summaries2 / The Two Gentlemen of Verona Summary

Here is a short The Two Gentlemen of Verona summary:

Two close friends living in Verona, Valentine and Proteus, take leave of each other. Valentine is setting out on his travels on his own because Proteus will not leave his beloved Julia, and has decided to stay in Verona. Julia is interested in Proteus’ attention and treasures the love letter he has sent her, but feigns a mild rather than a passionate interest.

Proteus’ father, Antonio, sends him on a mission to Milan. When he arrives at the Duke of Milan’s court he finds that Valentine is there and has fallen in love with Silvia, the duke’s daughter, who returns his love. Proteus, who has sworn love and fidelity to Julia falls in love with Silvia at first sight. In the meantime, the duke is planning the marriage of Silvia to the foolish Thurio. Valentine plans to elope with Silvia, but the jealous Proteus tells the duke of the plot, and Valentine is caught carrying a rope ladder to Silvia’s window. The duke banishes Valentine and Proteus woos Silvia with songs and declarations of love. She scorns him and reminds him about Julia.

Julia arrives in Milan, disguised as a pageboy, Sebastian. Proteus sends her (as a pageboy) with the ring that she, Julia, has given him. Silvia has promised him a picture of herself, although she is still devoted to the absent Valentine.

In the meantime, Valentine has been captured by a band of aristocratic outlaws, who make him their chief. Silvia persuades a courtier, Sir Eglamour,  to accompany her to Mantua to find Valentine, and she is also captured by the outlaws. The duke and Thurio go after her, taking Proteus with them. Julia, still disguised, follows him. Proteus rescues Silvia. He tries to force himself on her but Valentine prevents him. They quarrel and are reconciled. All this is heard by Julia and, misunderstanding, she thinks that Valentine is yielding his interest in Silvia to Proteus. She faints in front of them. Proteus recognises the ring he has given her, and when her identity is revealed, Proteus’ love for her is revived.

The outlaws have captured the duke and Thurio. They trick Thurio into showing his cowardice by denying Silvia. The duke approves the marriage of Silvia and Valentine; the two couples agree to share a wedding day and the duke pardons the outlaws.

And that’s a quick The Two Gentlemen of Verona summary. What are your thoughts – anything unclear, or missing? Please let us know in the comments section below.

See All The Two Gentlemen of Verona Resources 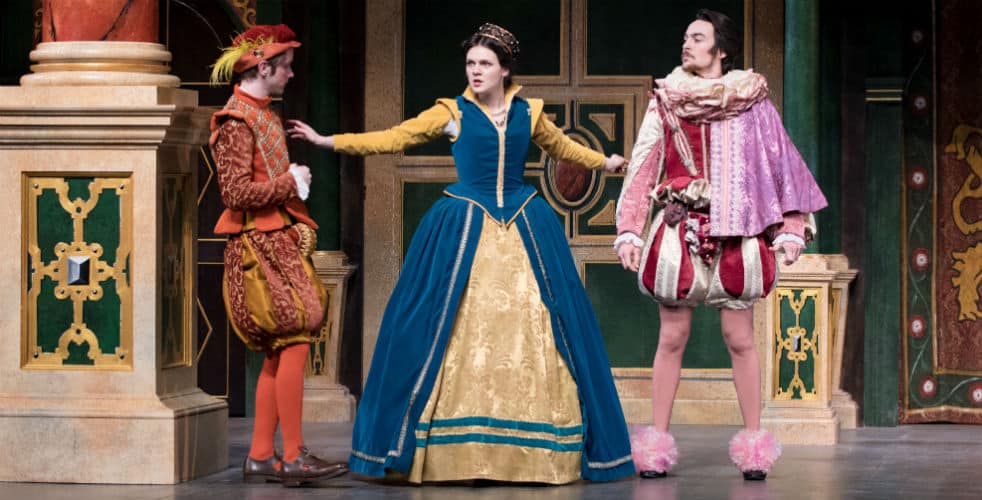 The Two Gentlemen of Verona on stage at John Cranford Adams Playhouse.