Below is a brief The Winter’s Tale summary:

King Leontes of Sicily and King Polixenes of Bohemia are old friends and the play opens with Polixenes about to return home after a six-month visit to Sicily. Although he is anxious to go, at the bidding of her husband, Leonte’s wife, Hermione, persuades him to stay longer. Her successful intervention leads to Leontes becoming obsessed with the idea that his pregnant wife has been unfaithful to him with Polixenes. He arranges with a courtier to poison Polixenes but the servant warns the king of Bohemia and Polixenes and the courtier, Camillo, escape together.

Leontes locks Hermione up in a prison, where her baby girl is born. Another courtier, Paulina, confronts Leontes, arguing that he has the duty to accept the baby as his daughter. Leontes instructs her husband, Antigonus, to get rid of the baby. Leontes consults the Delphic oracle who tells him that Hermione is innocent. Their little son dies of a broken heart because of his mother’s imprisonment. Leontes is shocked by the death of his son and he becomes remorseful about his treatment of Hermione. But she has collapsed and he has received word that she has died. It is also too late to do anything about the new-born baby. When Antigonus had taken the baby away, at one point he had placed her on a beach. But he was attacked and killed by a bear and the baby was left alone on the beach.

Two shepherds, father and son, find the baby and take her home with them.

Leontes spends the next sixteen years mourning the deaths of his wife and children. He does not know that Hermione is alive, living in seclusion, believing that her daughter is alive somewhere and will be found at some time. Meanwhile, Polixenes’ son, Florizel, has met a shepherd’s daughter in Bohemia and fallen in love with her. One day Polixenese and Camillo disguise themselves as common men and attend a sheepshearing festival, which is being organised by the shepherdess, Perdita. When Polixenese realises that his son is involved with her he reveals his identity, and intervenes, threatening the shepherds for facilitating the relationship between the prince and the young shepherdess.

Camillo and a roguish minstrel, Autolycus, help the lovers to escape to Sicily. The shepherds follow them and Polixenes follows the shepherds. Florizel goes to the court of Sicily and introduces Perdita to Leontes. When the shepherds and Polixenes also arrive the whole thing begins to unravel with one revelation after another. Paulina takes them all to see a new statue of Hermione, and while they are looking at it, it moves. The lovers are to be married as Leontes and Hermione reunited. Paulina and Camillo are also to be married.

And that’s a quick The Winter’s Tale summary. What are your thoughts – anything unclear, or missing? Please let us know in the comments section below.

See All The Winter’s Tale Resources 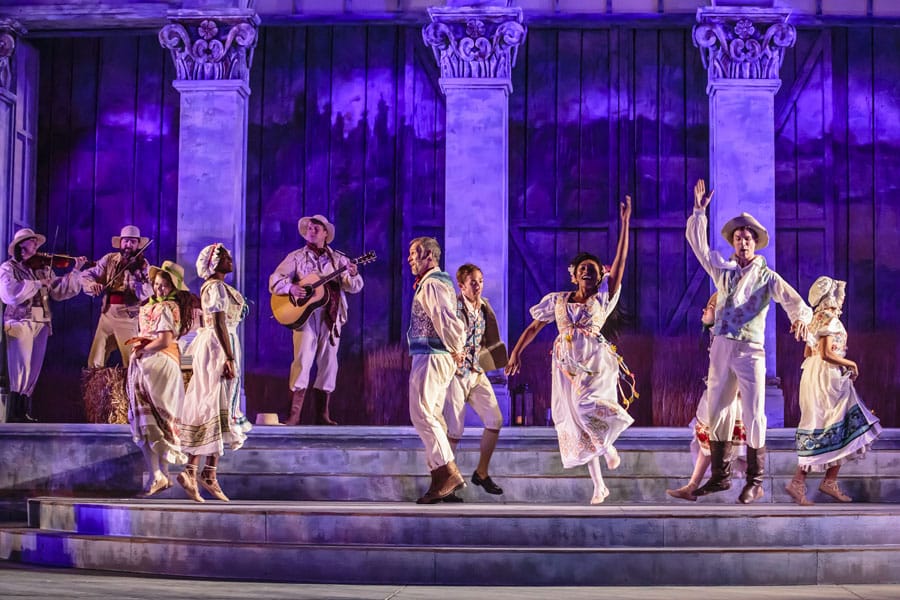