Traditionally Shakespeare’s play types are categorised as Comedy, History, Roman and Tragedy, with some additional categorised proposed over the years. The category of Shakespeare’s ‘Roman plays’ is simply a convenient description that scholars and critics have given to the four plays that Shakespeare set in ancient Rome.

That these four plays are referred to as the Roman Plays conceals a number of issues. For example, Antony and Cleopatra is often regarded as a tragedy, or because, like Romeo and Juliet, the tragedy concerns two lovers who suffer equally, a ‘double tragedy’. But even here, the term ‘tragedy’ refers to a form of Greek tragedy which some of Shakespeare’s plays, like Macbeth, strongly resemble, but none of them fits neatly into any category. Antony and Cleopatra, for example, produces strong tragic feelings in the audience but it’s actually written with a comic structure. It’s one of Shakespeare’s most ‘postmodern’ plays. Julius Caesar has a central character, Brutus, who looks very much like a tragic figure but there are too many issues explored in the play for it to be termed a tragedy. It’s therefore convenient to take hold of the ancient Roman setting and call these plays ‘Roman Plays.’

What Makes a Shakespeare ‘Roman play’?

What the Roman plays have in common is that they are all set in ancient Rome and that their source is the Roman historian, Plutarch, translated by the Renaissance English translator, Sir Thomas North. Shakespeare actually copied passages from North, for example Enobarbus’ description of Cleopatra, and the barge she sat in in his play Antony and Cleopatra. Shakespeare alters that piece of text, adapting it to his purposes with additional imagery and by casting it into his own metrical pattern.

The plays all explore power. They also examine things like loyalty, war, love, friendship, and honour. Another feature of the Roman plays is that it was customary in Shakespeare’s time to use Roman costume on the stage to re-enforce the impression that we are in Rome. Usually, costume wasn’t an important issue: the characters came on dressed in contemporary clothes, for the most part, although social class was depicted by purple and gold for kings, the right kind of material for the nobility, and merchant and peasant dress accordingly. It’s an interesting fact that when actors wore the clothing of a nobleman or a king they were technically breaking the law, as there were strict laws forbidding the use of such clothing if you weren’t a member of that class. 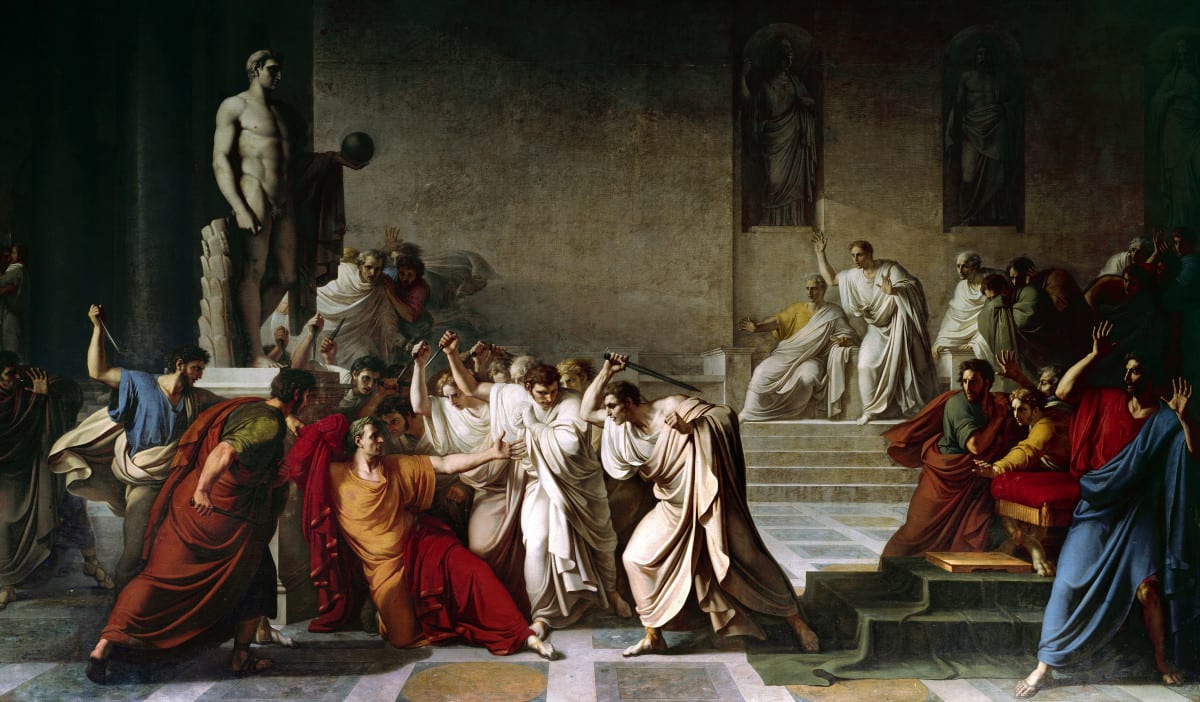 Caesar is set upon by senators on the ides of March, in Roman play Julius Caesar